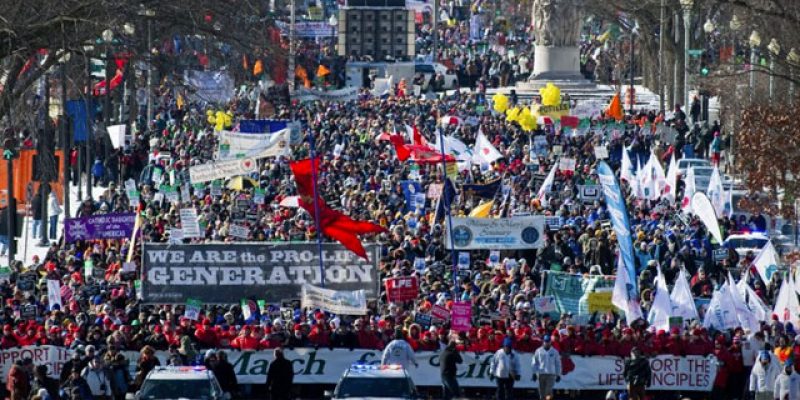 The media was gushing this past weekend over the Women’s March that drew millions of women, mainly in cities like Washington, Chicago and Los Angeles, but which also saw threats of blowing up the White House and messages of “love” followed by multiple uses of the f-word on live television.

What you won’t see this upcoming weekend are reports about the hundreds of thousands of pro-life individuals here in DC, or the thousands that marched in Baton Rouge or other cities throughout the US. What you won’t see are stories about the students who save up for an entire year, not to vacation in the Caribbean, or visit friends in California, but to march with their pro-life brothers and sisters for a cause they believe in. What you won’t see is a story about a march that has been going on since 1974, through mega snow storms (like in 1987, which saw 10,000 marchers still show up, and in 2016, which saw 40,000) and difficult circumstances (like in 1990, which saw several pro-life marchers injured in an escalator collapse, causing other marchers to have to walk several miles to the march site).

Anyone who considers themselves pro-life should be thankful for the work of the March for Life. The 1970s were a difficult time for any pro-life American. With the rise of second-wave feminism, the Supreme Court’s handing down of Roe vs. Wade, and the overwhelming support for legalized abortion nationwide. Despite the overwhelming odds, the early pro-life marchers put their hands to the plow and began work that they knew would take years to come to fruition. Indeed, despite Roe v. Wade still being the “law of the land,” half of Americans consider themselves pro-life, and a majority of millennial Americans are also pro-life. While 1970s Republicans like Richard Nixon and Gerald Ford were pro-choice, the movement saw a shift in the GOP with the election of staunchly pro-life Ronald Reagan, and a party platform that advocated for the overturning of Roe v. Wade. It’s possible that no Republican could be elected on a national stage without espousing pro-life views. Even President Donald Trump, who called himself “very pro-choice” in a 1999 interview, now says he’s pro-life and will appoint pro-life judges.

The media may never give the March for Life the coverage it deserves. Had the Women’s March drawn 40,000 during a blizzard, press outlets would have screamed that there were courageous women who braved the elements to stand up to President Trump. When the March for Life draws that same number in those same circumstances, the stories are that the march saw a significant drop-off from previous years. Despite bringing 650,000 marchers to DC in 2013, the March for Life will likely have to continue its work without much attention. Regardless, the 43-year-old event will continue changing the culture in the US by promoting pro-life principles, lobbying government officials to pass more pro-life legislation, and showing that the way to make effective change isn’t by threats of violence and f-bombs.

Interested in more national news? We've got you covered! See More National News
Previous Article PRAGER U: Why Good Teachers Want School Choice
Next Article On Sean Spicer’s Weekend Performance And The Controversy About The Crowds…