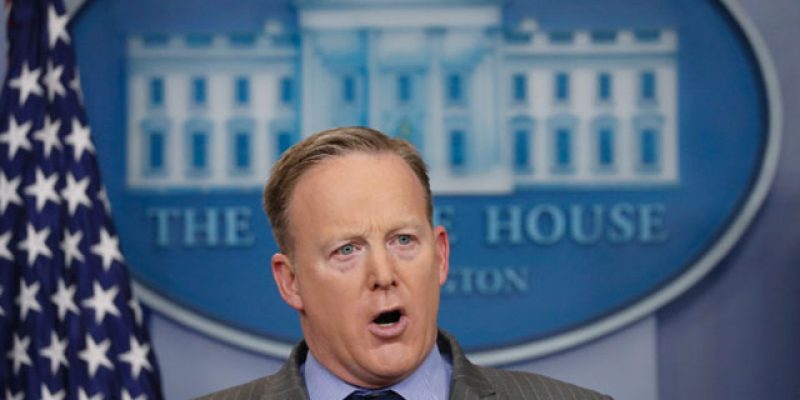 …I’ve been pretty friendly to Donald Trump since he won the election, and even before that; I’ve moved toward Trump’s camp since the magnitude of Hillary Clinton’s dysfunction and corruption was made more fully known in the fall. But as our readers know I’m not in thrall to Trump by any means; he wasn’t my candidate in the Republican primaries and frankly I would have supported a third-party candidate in November if I’d found one worthy of that support.

So while I’m going to be disposed to favor Trump on most policy issues and while I want to see him succeed as president – mostly now, after this past weekend clearly shows, that if you turn this country over to what remains of the Democrat Party you invite a parade of horrors that looks quite a bit like what the European Left did to that continent in the 20th century – I’m going to be objective.

And objectively, it was a bit puzzling to see Sean Spicer go off on the media in the way he did on Saturday.

Here was Spicer, unleashing an angry rant about media coverage of the inauguration and Trump’s first day on the job Friday…

There are two things going on here that Spicer is complaining about. First was the MLK bust issue, and he’s correct about that being a complete lie – and trashing the media in response puts Spicer in the right.

And he had a point to make about the reporting of the inaugural crowd. There is no question the media went out of its way to misreport the crowd at Trump’s inauguration, and circulated photographs showing a smaller crowd than Obama’s inauguration in 2009 – but more importantly, a smaller crowd than Trump actually had. Photos from the time of his having just taken the oath of office show crowds all the way back to the Washington Monument, which would indicate he had a fairly similar crowd to the one Obama had in 2009 – but probably not quite as big.

This is the comparison photo CNN and others were circulating. Obama’s crowd is on the left. 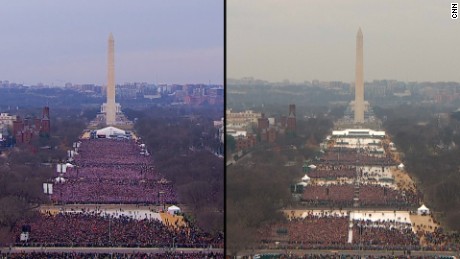 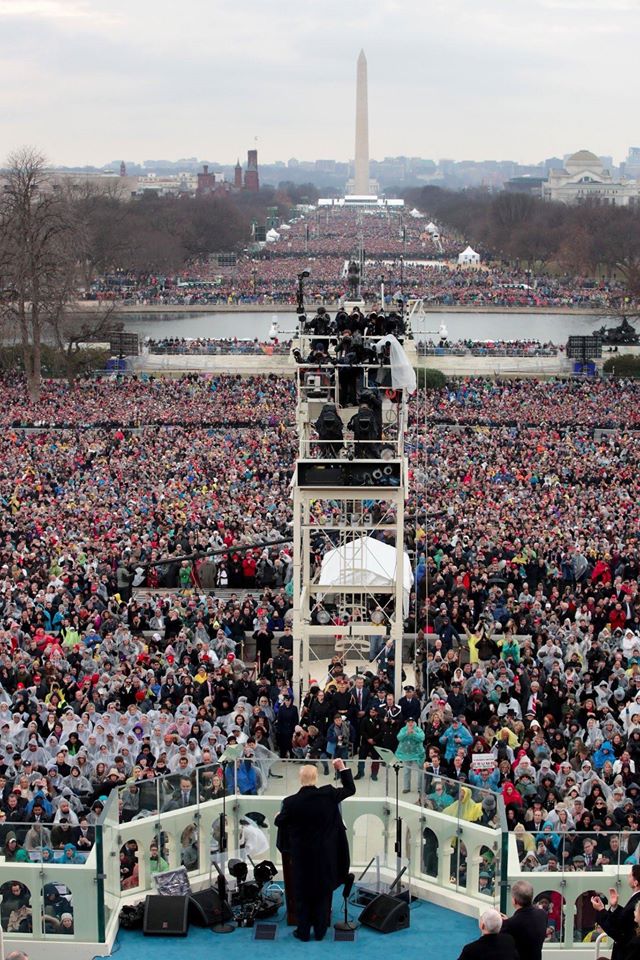 It’s pretty clear Trump had a considerably bigger crowd than CNN, and others, were alleging based on the photos they circulated. But it’s also clear he probably had a little less than Obama had eight years ago.

So there is no reason for Spicer to be making the claim that Trump’s inauguration had a bigger audience than Obama’s in 2009. It doesn’t matter whether he did or not, and he shouldn’t have anyway. After all, Washington, DC is 46 percent black and 40 percent white, and it’s 76 percent Democrat by voter registration. Obama carried DC with 92 percent of the vote in 2008; Donald Trump got six percent of the vote in 2016. That means Trump would have to import all of his crowd from out of town, whereas Obama could get a giant share of it from right there in Washington.

Plus, Obama was the first black president and that made him a political messiah to a significant part of the national electorate. Trump’s movement is not insignificant but nobody would call his election and inauguration in and of itself a historical event in the same way.

So no, he wasn’t going to get an Obama 2009-sized inaugural crowd. Particularly given that it was raining on Friday. For the purposes of what Spicer was complaining about, the comparison with Obama isn’t the important piece to this – what was important was the comparison between Trump’s actual crowd and what the Democrat media represented it to be; that’s what mattered.

And Spicer, frankly, blew his opportunity to properly shame the media for lying about his boss. He needed to have his own facts straight on this and instead he went overboard into the realm of propaganda and hackery, and in so doing he lost the high ground.

I regard that as especially unfortunate because one overarching goal, completely lost amid the griping about Spicer’s over-grandiose claims vis-a-vis the Obama 2009 comparison, of the new administration is to take on the Democrat media and delegitimize them as partisan hacks who won’t report the news fairly. It is correct to do so; we’ve already seen countless examples of partisanship and straight-up lies in reporting. As an example, CNN last week went so far as to claim Nancy Sinatra was upset at her father’s famous hit “My Way” being played as the first-dance song at the inaugural balls, which prompted Sinatra to take to Twitter to deny she’d ever said anything of the sort and ask why CNN would lie about the subject.

Amid that environment, there is zero reason why the Trump camp shouldn’t treat the media as hostile and trash them at every turn. CNN, the New York Times and the Washington Post, among others, probably deserve to get the same treatment Fox News received at the hands of the Obama administration, and so should every other media entity making the absurd claim that the Obama administration was scandal-free.

But if you’re going to be effective doing that, you have to have the facts on your side. Spicer was just as fast and loose as the media attacking his boss, and because he was a moment was lost. He has to do better, or Trump is going to need a new press secretary.

Interested in more national news? We've got you covered! See More National News
Previous Article WATSON: The Women’s March Could Learn from March for Life
Next Article Mitch Landrieu’s and JBE’s New Plan To Fight Crime In New Orleans Is Every Bit Of A Joke As You Would Expect