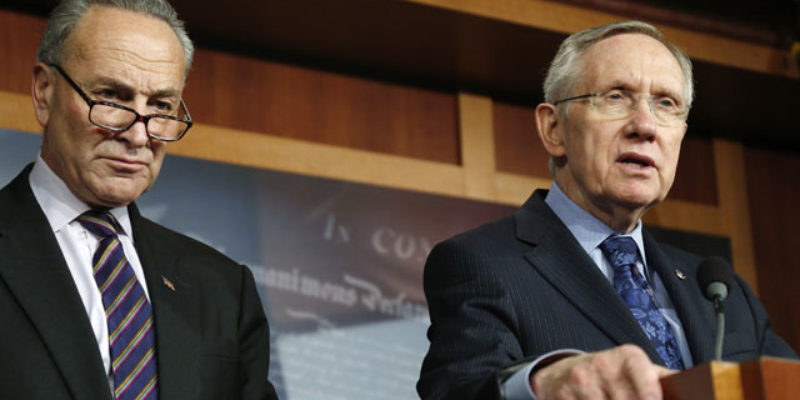 Here’s something from October 24, a date from a completely different reality in American politics…

When John McCain boasted recently that he and other Republican senators would fight any Supreme Court nomination by Hillary Clinton, it represented the final blow to the old bipartisan tradition of comity toward qualified and non-extremist SCOTUS nominees. And so it was no real surprise today when outgoing Senate Democratic leader Harry Reid predicted confidently that if his party regained control of the upper chamber, the filibuster against confirmation of appointees to the high court would quickly become a thing of the past.

Envisioning Hillary Clinton in the White House and Democrats controlling the Senate, Reid warned that if a Senate Republican minority blocked her Supreme Court nominee, he is confident the party won’t hesitate to change the filibuster rules again (no, Reid won’t be in the Senate to make that decision, but he is the ultimate informed source on this topic).

“I really do believe that I have set the Senate so when I leave, we’re going to be able to get judges done with a majority,” Reid told Talking Points Memo. “They mess with the Supreme Court, it’ll be changed just like that in my opinion,” Reid said, snapping his fingers. “So I’ve set that up. I feel very comfortable with that.”

Didn’t work out the way Reid and his pals in the Senate Democrat Caucus thought, so Chuck Schumer, who is now about to inherit Reid’s old job as the Senate Minority Leader, is flapping his gums with threats against Donald Trump and Mitch McConnell about what’s going to happen if he doesn’t like Trump’s Supreme Court pick…

The top Democrat in the Senate, Chuck Schumer of New York, is promising to block one of President-elect Donald Trump’s first big initiatives — naming a ninth member to the Supreme Court.

“It’s hard for me to imagine a nominee that Donald Trump would choose that would get Republican support that we could support,” Schumer said in an interview Tuesday night on MSNBC’s “The Rachel Maddow Show.”

Asked whether he’ll do his “best to hold the seat open” on the Supreme Court, Schumer responded, “Absolutely.”

For Schumer, it’s about retribution. The Republican-controlled Senate failed even to vote on President Obama’s last nomination to the highest court, Merrick Garland, who was put up for the job after the sudden death of Justice Antonin Scalia.

Republicans instead made the Supreme Court a campaign issue, saying whoever was elected president would get to nominate Scalia’s replacement.

The Democratic Senate leader told host Maddow that Republicans got away with not voting on Obama’s nominee, but that “the consequences will be down the road.”

Except Schumer has a problem, which is that virtually anybody on the list of potential Supreme Court appointments Trump released during the campaign will get unanimous support from the Republicans in the Senate – with no more than one or two strays, if any. With two, Mike Pence could break a 50-50 tie and confirm Trump’s choice.

But it won’t come to that, because Joe Manchin of West Virginia and Heidi Heitkamp of North Dakota, who were both considered for potential cabinet positions in a Trump administration, will be hard-pressed to vote for the Supreme Court nominee. Both are up for re-election in 2018 in deep-red states and they’ll have a monstrously-difficult time holding their offices in the best of circumstances; a vote against a popular conservative Supreme Court justice could be a killer issue for a Republican challenger to beat them with.

They’re not alone, as Manchin and Heitkamp are only two of 10 Democrat senators up for re-election in 2018 in states won by Trump.

Schumer is threatening to filibuster the nomination. The problem is, Reid’s October statements make for a glaring inconsistency – how does he get to push a filibuster of a Trump nominee when he didn’t object when Reid suggested his colleagues would nuke a filibuster of Hillary’s nominee once the Democrats retook the Senate?

And this is really easy for McConnell, the Majority Leader who needs to show that under his leadership the Republican-majority Senate can implement Republican personnel and policy. McConnell should take one look at Schumer’s bluster and threats and he ought to declare that a blanket filibuster of a qualified Trump nominee wouldn’t be tolerated.

That while he wants to preserve the filibuster on legislation, as it serves a purpose in making the Senate a deliberative body rather than a rubber stamp, he’s not going to put up with petty partisanship from Schumer, who had every intention of steamrolling Republican minority opposition to whatever leftist Clinton was set to nominate.

And therefore he would do one of two things in response to some indication that Schumer’s threats are more than just idle talk for the cameras.

First would be to demand that if the Democrats would have a filibuster it would be an honest-to-God REAL filibuster, meaning that they’d stand on the floor all night long, with no sleep and no bathroom breaks, engaged in constant speech. Certainly there are some prolific windbags in that caucus; one should have little doubt they could carry on for hours. For days? We’re not positive the Democrats could sustain much of a delay if a battle of wills of that magnitude ensued.

Let’s not forget the advanced age of so many in the Democrats’ caucus. Participation in a long active filibuster could be physically taxing for some of those walking fossils; if one of them strokes out or has a heart attack on the floor of the Senate amid Schumer’s filibuster that would be blood on his hands – though they’d undoubtedly blame McConnell.

The other would be to simply say “Nope,” and include the Supreme Court in the nuclear option Reid has already imposed against filibusters of federal appointments. There would be no corpses on the Senate floor, but that would represent an historic change in Senate procedure.

So be it, though. Reid and Schumer would only be reaping what they’ve sown.

We’d prefer the first option, because after all it would at least be sporting. It’s not a nuking of the filibuster, and in all likelihood the Dems would see their filibuster peter out in under a week while the public griped about all the taxpayers’ time wasted with worthless shenanigans. And it has the added benefit of exposing the Dems in the Senate as failures in advance of a 2018 midterm where they’re facing a potential annihilation with all those hostile states they’re trying to hold seats from.

Either way, what can’t be allowed to happen is for McConnell to fail to confirm Trump’s nominee for Antonin Scalia’s seat. He knows that, and so does Schumer. It might be that when crunch time comes Schumer folds his tent and retreats rather than face the rout which will surely come.

Interested in more national news? We've got you covered! See More National News
Previous Article It Hasn’t Snowed Yet In Louisiana This Winter, But…
Next Article Mars, Or The Moon?