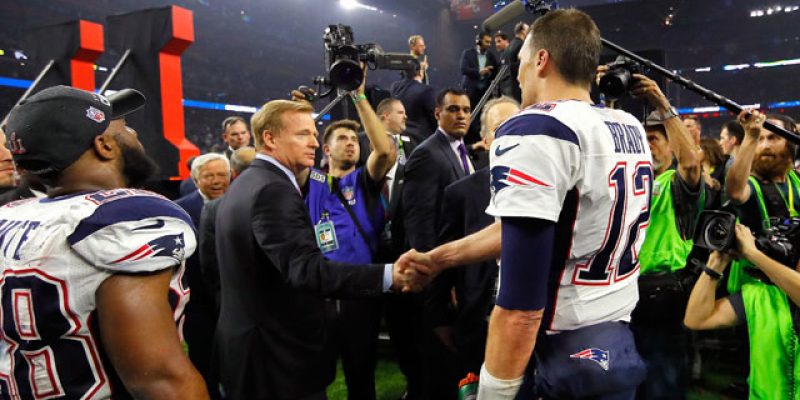 The Super Bowl is over, Tom Brady got his fifth ring and vengeance against the league, and the building process begins for teams looking to make it to the big game in 2018.

In the first part of a two segment interview, NFL Draft expert and WWL 870 AM radio commentator Mike Detillier spent some time giving his thoughts on who is the greatest NFL quarterback of all time, the Great Dane’s election to pantheon of pro football, whose faces would be chiseled on the Saints’ “Mount Rushmore”, and an assessment of the Black and Gold’s current needs and potential breakout talent.

Q: With his five Super Bowl rings and leading the most impressive comeback in the championship game’s history, is Tom Brady the greatest quarterback in NFL history?

A: Well, Mike, I would have said that even before the Super Bowl game, but there is no debate now, he is the very best ever. He is winning in the post-pre-agency world.

Just like Bill Belichick is the best coach ever for the same reasons. Paul Brown, Vince Lombardi, Bill Walsh, Tom Landry, Chuck Noll and Don Shula early with the Miami Dolphins never had to have a revolving door of players like they do today due to free agency.

Brady is making everyone around him look better. He’s a unique player who is better today than he was 10 years ago. 39 years old and still the very best. You will never live long enough to see another combination of head coach and quarterback together get to 7 Super Bowls and win 5.

Some of this idiotic talk about Brady being a system quarterback is so foolish. Brady is the system. No debate he is the best ever, but he is also playing in a game today with different rules about how you can cover and if you breath hard on a quarterback the referees throw a flag. But Bradshaw, Unitas, Starr, Aikman, Bradshaw, Staubach, Otto Graham and others played with the same crew. Very little turnover personnel wise and Brady is dealing with a revolving door of players and still winning in a huge manner. 27 of the 53 men on the current Patriots squad were not there just two years ago when they won it.

I measure a player in what he does with everything on the line and Brady is just remarkable. He got help from some very weird play-calling by the Falcons that helped, but he was just fabulous and at 39 it is even more remarkable.

Q: Speaking of greats, our own Morten Andersen finally got his ticket punched to Canton. We’re you surprised it took this long and do you think it was either now or never for the Great Dane with Adam Vinatieri on his heels?

A:  Just so thrilled for my old pal. I have always thought he was the best “money” kicker to ever play the game. He was just not in many meaningful games playing with the Saints and just a few with the Falcons, but he was just so good. At one time he led the Saints and the Falcons in scoring and his consistency over such a long period of time makes him a worthy NFL Hall of Famer. In my timeframe covering the league the only kicker with as strong a leg was Sebastian Janikowski with the Raiders.

I thought this year was his best shot. Last year I know he was so disappointed because he thought he would make it last year. Well deserved and he was just not an elite kicker, and the best I have seen in my 30 years covering the NFL, but one of the nicest and most caring guys you will meet. Just a great guy in what he did with so many local charities. And one of the funniest guys too.

He was one of those guys who wanted to make the winning field goal each week in the final seconds. He relished those critical moments. Some guys don’t have that mentality and long before positive thinking and getting mentally ready by envisioning a kick or a play was popular Morten was into that big time.

He would read books and see positive thinking doctors to get that focus-view of playing. Morten was just a remarkable player.

He is on the Saints version of Mount Rushmore with Willie Roaf, Rickey Jackson and Drew Brees.

Q: 2016 was supposed to be a special year for the Saints as it marked the franchise’s 50th anniversary but instead endured yet another losing season. Is the team about to turn a corner or are they stuck in neutral?

A: Well I didn’t think 2016 would be a turnaround year. I thought they would end up 7-9 or at best 8-8. They are a middle of the road team like about 17 others-stuck in the middle. They can score and they are explosive on offense, but at times impatient with the running game and they are not a good defensive team. It’s a matter of talent on defense.

How many starters on defense would you trade one for one for if you were with the Falcons or Panthers?  Cam Jordan is the best player they have and Delvin Breaux is outstanding when healthy, but the rest are young kids or average players. I have no idea what they were doing moving Stephone Anthony from the middle to the strongside. He has to put more effort in knowing what to do on each and every play, not every once in a while, but he belongs in the middle.

They don’t get a good pass rush on a consistent basis and they need a lot of help in the secondary. I know injuries devastated them in the secondary, but this team has been rebuilding on that side of the ball for the past 5 years. They need to get better on defense. Today is an offensive game and you win with offense, but you have to slow people down at times and take the ball away. They just have not been able to do this.

The Patriots are terrific on offense and high-risk with the way they throw the ball, but they take the ball away so much and they don’t turn it over. Out of the last 12 seasons the Patriots have been on the plus side of the giveaway/takeaway ratio double digits in 11 of those 12 years.

The Saints are 41-4 when they rush the ball 30 times or more in a game. They have to play to do more of playing some small ball and be more patient with the running game.

When the Saints score 35 points you hope they win, but you are not sure because the defense could easily give up 38 and early in the season their special teams were terrible.

A: They need to grab a veteran starting cornerback and a starting linebacker, along with a potential starter at tackle via free agency. Then grab the pass rusher, another cornerback, an offensive guard, safety and don’t be surprised they grab a tight end early in the draft.

Another mystery is what to do with Nick Fairley who had a very good season in 2016 for the Saints. He has been mercurial throughout his career, so do you pay him a lot of money based on one really strong year because if you don’t someone will. People make a big deal that they will have $29 million dollars to play with in free agency, but 22 other teams in the NFL have more.  It’s make or break for Sean Payton in 2017 with the Saints.

Q: Wide Receiver Michael Thomas seems to be the first big draft hit for the Saints front office since they landed Cam Jordan. Do you see any players currently in the roster on the verge of a breakout in 2017?

A: Michael Thomas is one of the top 25 players in the NFL under 25 years old. He is a better player than Marques Colston was as a rookie. He is more talented than Colston and that is saying something. The only negative is that Colston got to play his entire career with Drew Brees and Thomas won’t have that luxury.

I am a big fan of Sheldon Rankins and he is a playmaker at defensive tackle and a potential Pro Bowl player, but the guy I think makes a huge leap is 2nd year defensive tackle David Onyemata.

I was impressed with his play as a rookie after playing his college ball at Manitoba in Canada. Big man who can move and he displays some really strong pass rush skills. Six years ago he didn’t know what a football looked like. Now, he is smart and instinctive.

Watch for these two young DTs. The strength of the Saints team, other than Drew Brees and what they have at wide receiver is at defensive tackle with Rankins, Onyemata, Tyeler Davison and Nick Fairley -if they can re-sign him.

Interested in more news from Louisiana? We've got you covered! See More Louisiana News
Previous Article A Thug Went To Rob A New Orleans T-Mobile Store. Here’s What Happened Next
Next Article Have You Seen The Crazy Video Of The Wasted Ole Miss Student Head-Butting The Cop?