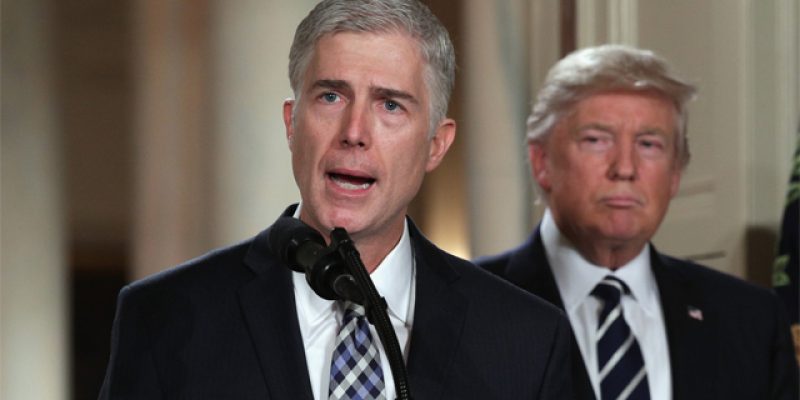 President Donald Trump, sorry I am still wrapping my mind around those three words strung together, made a great pick for the Supreme Court seat that was once occupied by the late Justice Antonin Scalia and did so in a brilliant manner by revealing his choice in a high-profile, prime-time televised announcement.

Initially mocked as resembling something out of The Bachelor, Trump’s announcement allowed his appointee to frame his own credentials and qualifications before the media could reinterpret (i.e. distort) the man and his record to the public.

Furthermore, Trump was able to use the opportunity to demonstrate that he is following through on his campaign pledges by selecting someone from a list of strict constructionists he had previously released.

Federal Court of Appeals Judge Neil Gorsuch is an originalist in the mold of the late Scalia.

And to the relief of conservatives, Trump’s selection won’t be an “Easter egg pick” unlike appointments made by Dwight Eisenhower, Richard Nixon, Gerald Ford, George H.W. Bush, and dare I say, Ronald Reagan.

George W. Bush’s name is omitted as his two justices were on average the most conservative of the previous six Republican presidents.

In addition to possessing spectacular academic credentials crowned with a doctorate in Philosophy from Oxford, Grosuch has a reassuring conservative track record, from his time as a conservative columnist in his undergrad days at Columbia to having authored a book critical of assisted suicide.

While on the Court of Appeals on the 10th Circuit Gorsuch upheld religious protections and called for reining in the authority of the unelected federal bureaucracy.

And the best part, the 49 year-old Gorsuch is a relatively young judge who if confirmed will remain on the high court for many years to come, laying the foundation of a lasting Trump court legacy.

Gorsuch seems to be a popular pick within Republican ranks as Trump’s most vocal GOP critics and even some of the Never Trump crowd complimented it.

In contrast the Democrats are trying to figure out what to do with the judicial appointment, with some issuing a fatwa, others hoping to utilize a confirmation vote for political cover, and some wanting to simultaneously oppose a filibuster and the nominee.

The burden is now on the Democrats, especially those senators seeking re-election in 2018 from states Trump carried.

Dems aren’t going to have much success citing “revenge” for Merrick Garland’s bottling as a legitimate reason to obstruct Gorsuch.

And linking Gorsuch with sundry crimes against humanity and Biblical plagues, as the Nancy Pelosi ridiculously did, won’t play well outside of Marin County.

The smart play for the Democrats would be to delay the inevitable obliteration of the Supreme Court filibuster to the latest date possible for maximum political effect.

The ever-unconventional president doesn’t seem too bothered by scrapping it though there might be some pushback within the Republican caucus.

With Trump in the White House there’s little chance of a Gang of 14 repeat from Bush 43.  So long as there is a Republican majority, Trump will insist on his judges going through either by clearing the procedural logjam with 60 votes if possible or 50-votes-plus-Pence if necessary.

However skipping on a filibuster would be problematic due to a seething Democratic Party base demanding total obstruction (Stop “fill in the blank” Now!) and opportunistic colleagues entertaining White House ambitions looking to out-tantrum each other.

Cory Booker of New Jersey has led a series of high profile pout-outs.  Elizabeth Warren of Massachusetts has stepped up her usual victim shtick while Kirsten Gillibrand of New York has the distinction of voting against everyone.

Who’d have thought Al Franken would appear to be the statesman in the Democratic caucus?

Typically the party in the minority has the easier time coalescing, even if impotently, against the White House and majority.

Yet due to the self-interest of caucus members and the unreasonable demands of the party’s leftist base, the Gorsuch vote could end up becoming  a major mess for the Democrats if they can’t work together and assume a more politically pragmatic posture.

Interested in more national news? We've got you covered! See More National News
Previous Article With All The Hay In The Barn, Here’s The Good, Bad And Ugly Of LSU’s 2017 Football Recruiting Class
Next Article The Red Bayou Show, Episode 72 – Featuring LSU Football Recruiting With Chad Laborde And Jacques Doucet