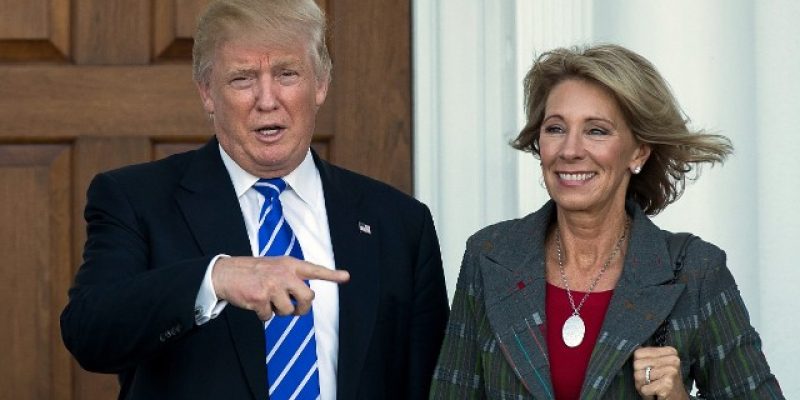 Mike Pence had to show up to break the tie. Two Republican Senators, Susan Collins and Lisa Murkowski, voted against.

The Senate on Tuesday confirmed Betsy DeVos to lead the Department of Education by the slimmest of margins, capping off a rocky, high-stakes fight for President Trump’s pick.

Pence is the first vice president ever to cast a decisive vote on a Cabinet nominee. The last time a VP broke a tie in the Senate was 2008, when then-Vice President Dick Cheney voted on a tax adjustment plan.

“It’s the Republican side demanding a vote for an unqualified candidate,” the Senate’s top Democrat said. “I hope against hope that another Republican will have the courage … [to] join us.”

The Democrats staged an all-night bitch-fest about DeVos, who comes to her new job with a background as a school choice advocate. She’s the worst nightmare for America’s teacher unions, whose hold on the nation’s pathetic public schools will be in great jeopardy if DeVos’ agenda of taking educational vouchers and tax credits and other devices to force open a consumer market in K-12 education were to take hold.

And the politicians the teacher unions own, which includes Collins and Murkowski and virtually every Democrat senator, are howling.

“A vote for Ms. DeVos is a vote to destroy the public school system,” Sen. Tom Udall (D-N.M.) said from the Senate floor.

Sen. Al Franken (D-Minn.) added that DeVos is “fundamentally incompetent,” saying her hearing was “one of the most embarrassing scenes” he’s seen since joining the Senate.

“I believe it may have been one the most embarrassing performances by a nominee in the history of the United States Senate,” he said. “We would not accept a secretary of Defense who couldn’t name the branches of the military.”

What the Democrats are bitching about is an exchange during her confirmation hearing in which she was asked about guns in schools, and said that those decisions should be made locally. She noted an example in Wyoming, in which Republican Senator Mike Enzi of that state had mentioned that certain schools had established fencing in order to guard against attacks by grizzly bears, and suggested that local officials in such a place might find gun availability a useful choice. This was considered by the Democrats an incompetent and ridiculous answer, though in any reasonable context you’d have to consider it a rational answer.

DeVos’ confirmation was seen to be the toughest of all of Donald Trump’s Cabinet appointees. Now that she’s in, the coast is clear for Jeff Sessions, who is a member of the Senate and part of the 52-48 majority the GOP enjoys in that body, to move forward for a confirmation vote as Attorney General. Sessions’ vote was necessary to carry DeVos to 50, where Pence could break the tie. Following Sessions will be Tom Price (DHHS) and Steven Mnuchin (Treasury), in what has been the worst confirmation process for a Cabinet at the beginning of any presidential administration since George Washington was inaugurated.

Interested in more national news? We've got you covered! See More National News
Previous Article Tonight Johnny Jones’ Team Will Be At Rupp Arena To Play Kentucky…
Next Article VIDEO: A Tornado Touched Down In New Orleans East Today, And There Was A Good Bit Of Damage