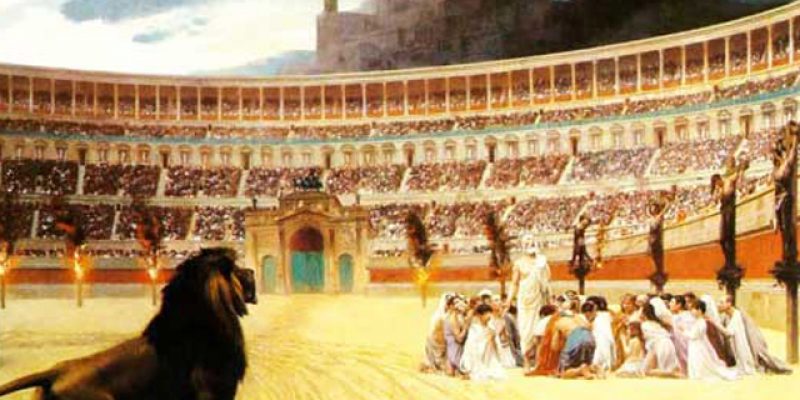 …and there is a certain Christians-vs.-Lions feel to the festivities. This could be a very ugly, bloody disaster.

Understand that the current nine-game losing streak LSU is on has included just one game against a ranked team – that was the 88-63 home loss to No. 19 South Carolina a week ago.

This is a road game at Kentucky, who’s No. 15 – but that ranking is down from what was a Top 5 ranking earlier because the Wildcats have gone through a bad patch, losing three of their last four including a 22-point loss at Florida over the weekend.

Meaning that John Calipari will be on the warpath with his team and they’ll be seeking to get well. LSU isn’t catching any quarter from Kentucky tonight.

I didn’t look this up but yesterday I was told by someone who would know that UK is a 25-point favorite over LSU – and that same someone had done research and only found one point spread larger than that among major conference games this year. That spread was 25 1/2, and it was for Oregon over Oregon State earlier this year. Oregon State has won four games all year and is winless in the Pac-12, while Oregon is sitting atop the league standings.

So it’s a relatively hopeless situation and likely one which will expose just how hopelessly destitute the LSU basketball program is.

And no, it’s not likely Johnny Jones, who’s responsible for the state the program is in and should have been forced out last year after failing to make a postseason tournament with Ben Simmons on his team, will get fired after getting defenestrated by Kentucky tonight. If Jones hasn’t been packed off by now there is no point in cashiering him after tonight’s debacle. There is no hope of this team making a postseason tournament, and there isn’t even all that much hope of winning another game at this point no matter who the head coach would be.

Everybody left on LSU’s schedule is either at or above .500 in conference play and competing for at least an NIT bid, with the exception of Auburn – and Auburn is 4-6 in the SEC and 15-8 overall, so they’re still in the mix for a postseason tournament. These teams are all considerably better than LSU and none of them have given up like LSU has. That won’t be fixed by giving one of the assistants Jones’ job for the seven remaining regular season games following tonight’s loss.

If LSU doesn’t win another game they’ll have the worst season in half a century. Losing out will mean a 9-22 record (that would include a loss in the first round of the SEC Tournament), and while they were 9-18 in John Brady’s first season in 1997-98 (LSU was 10-20 the previous year under Dale Brown), you’d have to go all the way back to 1966-67, the first season of Press Maravich’s tenure as LSU’s coach, to find a season with more losses (LSU was 3-23 that year). At least that year Maravich had his son Pete playing on the freshman team, which consistently outdrew the varsity at the Cow Palace, so things were unquestionably looking up for LSU.

They’re not looking up now.

But the question amid this disaster is: how does the LSU basketball job rate at this point? Is the current state of the program an immutable thing, or is LSU where it is because of “artificial” reasons? Better put, we now know what the rock-bottom quality of LSU hoops can be. What is sea level, and how high above that can the program rise with the right management?

That’s hard to answer, actually. LSU has never applied a commitment to a strong basketball program to any of its hires. Maravich was the head coach at North Carolina State and had been winning there as an interim coach, but he was hired to get Pete to come to LSU. Dale Brown was a complete unknown assistant coach at Utah State who talked his way into the job at LSU because nobody cared who the basketball coach was. John Brady was hired because of connections to Joe Dean (more specifically, he and Dean’s son were friends) and because he’d had a little success at Samford. Trent Johnson was hired by Joe Alleva, who had been LSU’s athletic director for only a few days, based essentially on one good year at Stanford when he had two seven-footers on their way to the NBA – and nobody seemed to notice Stanford’s athletic director wasn’t going to extend his contract. And Jones got the job thanks to politics.

At no time has the top brass at LSU ever sat down and make a plan for turning the basketball program into a winner and a moneymaker and made the decision to find a coach who could get it there.

And yet at times with the above-named coaches, LSU has been relevant in basketball. Brown had LSU in the NIT or NCAA Tournament 15 straight years, including 13 NCAA appearances, a pair of Final Four teams, two Elite Eights and a Sweet Sixteen. Brady had them in the Final Four. Johnson’s first team won 27 games and gave eventual national champion North Carolina the toughest contest they’d see in the tournament. It is possible for LSU to be a quality basketball program – they’ve done it at times even without having an elite coach.

But will an elite coach come to LSU?

You’d figure the answer is no, for the simple reason that LSU has never had an elite coach in basketball. But that being said, before Nick Saban was hired in football can you really say LSU had an elite coach for all the success it had enjoyed?

Bill Arnsparger had been pretty good. Arnsparger was at LSU for all of three years, which isn’t really long enough to build a program. Paul Dietzel had brought the program out of the doldrums and into the national championship spotlight – winning the title in 1958, coming close in 1959. Charlie McClendon was solid, but never particularly elite. The coaches between Arnsparger and Saban were, in short, lousy.

When Saban was hired LSU found an elite coach, and the football program became elite. So the short solution for basketball is to hire the right coach, and then LSU’s basketball program can be just as nationally competitive as football – or baseball, or golf, or gymnastics, or softball, or any of the other programs on campus which compete for national championships because they have coaches capable of that level of success.

But how do you attract a basketball coach of that quality?

It would help if LSU had an athletic director coaches want to work for. It’s not established that this is the case, and given two prominent incidents in Joe Alleva’s history – the firing of Duke lacrosse coach Mike Pressler and the dissolution of his program amid the ultimately-fraudulent allegations of rape by a few of his players, and the botched attempt to fire Les Miles in 2015 – it wasn’t all that surprising that last year when Alleva was hiring a football coach the word went out that neither Jimbo Fisher nor Tom Herman really wanted to work for him. Alleva’s presence as the AD might make finding a Nick Saban for basketball harder.

You also get what you pay for. LSU is going to have to pay more than $1.5 million per year, which is what Jones makes, in order to get a coach capable of bringing the program to national competitiveness. Sure, there are younger coaches – Matt McCall at Tennessee-Chattanooga, Kevin Keatts at North Carolina-Wilmington, King Rice at Monmouth – who are making far less than Jones is who are building attractive enough resumes to make one believe they could be the Next Big Thing. The problem with hiring those coaches at Jones’ current salary is that LSU won’t be the only major school hiring this year, and that fact will likely occasion the dreaded “bidding war” Alleva decried when he backed out of the Herman sweepstakes. And the more established coaches – Steve Prohm at Iowa State, Mick Cronin at Cincinnati, Archie Miller at Dayton, Will Wade at VCU, among them – are at schools where an offer from LSU can leverage their current employer into bidding them up such that it could cost $2 million or $2.5 million per year to hire them. LSU is going to have to be willing to pay such a price, in the knowledge that if the coach is productive at LSU at a level commensurate with his performance at his current school he’ll bring in the revenue to pay that increase in salary.

It’s a question of commitment, and we’re going to find out the answer soon. Jones’ time as LSU’s coach will be over at the end of the season, one year later than it should have been, and Alleva, assuming he isn’t sent packing (we’ll make that assumption, because there is next to no buzz to the effect his job is in jeopardy), will get an opportunity to show that he wants to make LSU basketball relevant – and that he’s capable of doing so.

But one thing seems certain. Rock bottom for the current iteration of LSU basketball will come at the hands of Kentucky in Lexington tonight.