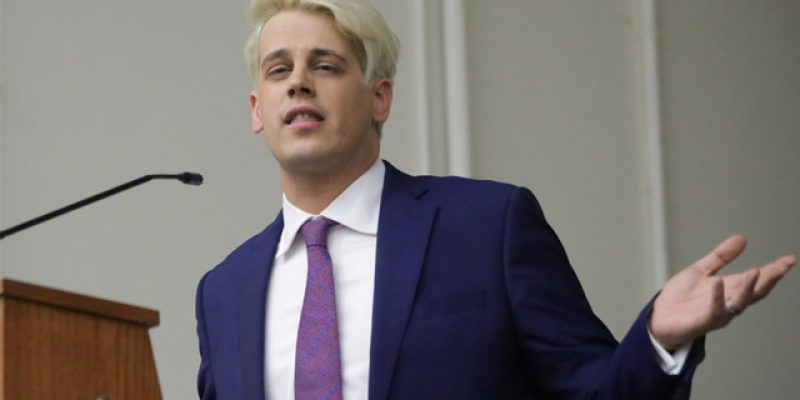 Boy, did Milo Yiannopoulos have a bad day.

Comments that Yiannopoulos had made in late 2015 and early last year that could quite reasonably be described as a defense of pederasty surfaced in advance of his scheduled headline speech at CPAC, the annual American Conservative Union conference which opens Wednesday, and the ACU dumped him post haste as a result. And shortly afterward, Simon & Schuster halted publication of Yiannopoulos’ book Dangerous.

Yiannopoulos said, and we’re paraphrasing, that it is possible that for a young gay male a relationship with an older man could be a positive. We’re assuming what he was talking about is the mentorship aspect of such a relationship; there are young men who are gay who might struggle to find mentors in their own homes given the strained relationship so many of them will tend to have with their fathers.

Except those relationships are all too often sexual in nature, and no, we as a society don’t put up with the idea of pederastic relationships becoming customary. That’s the kind of barbarian behavior the Afghans practice, which is a key reason that country is the worst place on the planet in which to live. It’s also the kind of behavior which contributed to the downfall of both ancient Greece and Rome. Western culture has rejected such relationships, and for good reason.

Yiannopoulos, who says his sexual story began as a victim of sexual abuse by a Catholic priest, ought to have known better than to make such statements. Even if he wasn’t entirely serious in making them, and even if he’s since sought to moderate them by making a full-throated rejection of pedophilia on his Facebook.

Frankly, we’re really not all that interested in his thoughts on pederasty. To be honest, the only real interest of ours Yiannopoulos holds is as a cudgel against the campus and social-justice Left. He is useful in calling out their hypocrisy and cognitive dissonance, and as a gay man of Jewish descent who purports to have black boyfriends he’s difficult for them to dismiss along their usual identity politics name-calling.

But to conservatives, Yiannopoulos is a co-belligerent. He’s not a particular ally.

It should be understood that he himself doesn’t identify as a conservative. He’s best understood as “alt-right,” though without some of the overt racism of the alt-right. Yiannopoulos is a sensationally good troll of self-important leftists; for example, on Friday night before all of the furor over those year-old comments broke, he was a guest on the Bill Maher show on HBO and he said Democrats are the party of Lena Dunham – which was exceptionally well said and not just because of the hysterical reaction it set loose on the Left.

But he was never a good fit for CPAC.

CPAC is a conference about conservatism. CPAC is a place for policy wonks to discuss the future of that movement and how best to advance its agenda through political activism from the federal down to the local level. What Milo Yiannopoulos brings to the table as a headliner for that annual discussion was questionable from the start.

Yes, Andrew Breitbart addressed CPAC several times before his death. Breitbart shared a few characteristics with Yiannopoulos and the latter’s writings have commonly appeared on the website bearing Breitbart’s name. But Breitbart was an actual conservative. He had a few heterodox positions at odds with more traditional conservatives, but those were much less contentious than some of the things Yiannopoulos offers.

And more, Breitbart was someone with whom the attendees at CPAC could identify and make common cause with. Breitbart was a movement man above all else; he got into the political fight against the Left because he wanted to change society in a way conservatives would believe would make it better. When he started fights it was with a greater goal – persuading people of the correctness of the conservative cause as he saw it – in mind.

There is no evidence that’s what drives Yiannopoulos. He’s a provocateur who hates the Left just as conservatives do. As such, he might well have rated a speech at CPAC – but he clearly wasn’t what the ACU needed as a headliner.

The speech they booked Yiannopoulos for is the one typically reserved for someone who can use the time to bear the ideological standard for the conservative movement. That speech sets the tone for the whole year in conservatism. Is the tone the ACU wanted that of someone who insults all the right people to drive the other side insane? There is a place for that, of course, but it’s certainly not the central place.

And so it’s fortunate this has blown up in the ACU’s face before CPAC rather than during the conference. By Wednesday this will be behind them. But it never should have been in front of them in the first place. Milo has his own speaking circuit and he’s done well with that, and the publisher pulling out of his book deal isn’t likely to stop it from becoming a bestseller on Amazon (he can just self-publish it and perhaps make even more money than he would have with Simon & Schuster). But CPAC needs actual conservatives, not alt-right trolls, serving as the face of the movement, and the cancellation of Yiannopoulos’ speech enables them to get back to that.