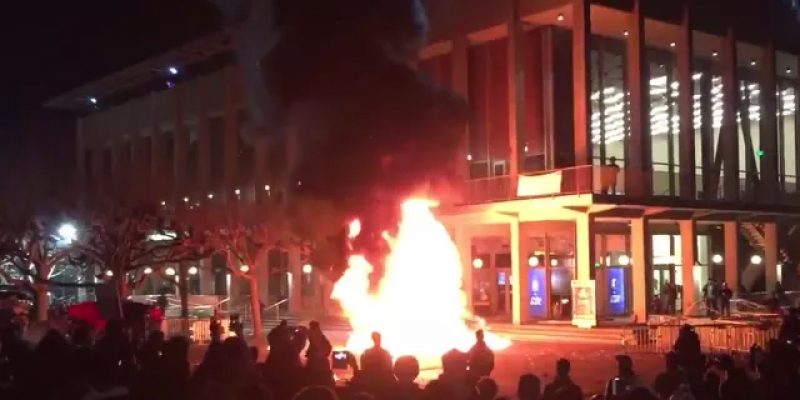 Friday, on the 38th anniversary of the 1979 Islamic revolution, thousands of Iranians demonstrated in Tehran. As usual, the crowd rallied against the “Great Satan,” yelling “Death to America.” They were burning the American flag and effigies of Donald Trump and stomping on the President’s picture.

Police and military personnel joined the protest this year which was focused on condemning Donald Trump and his agenda. The intensity of the anti-Americanism was particularly intense since President Trump issued sanctions against the country in response to their inter-continental ballistic missile test. The Trump administration declared that the test violated the 2015 nuclear agreement between the Iran and six world powers and United Nations Security Council Resolution 2231 that banned the country from “any activity related to ballistic missiles.” In response, the United States officially put Iran “on notice.” The Iranian regime ignored the President’s warning and promptly launched another ballistic missile test.

Unfortunately, the anti-Trump rally in Tehran bore some striking similarities with protests that have been organized in this country. After the election of Donald Trump on November 8, liberal organizations have been working non-stop to create unrest. One activist claimed that the goal was to make the country “ungovernable.” Thus, American flags have been burned, Trump supporters have been attacked, and the President has been threatened by numerous celebrities, activists and street thugs.

For example, two weeks ago in Berkeley, California demonstrators lit fires, threw firecrackers, broke windows, defaced property, yelled obscenities and prevented conservative commentator Milo Yiannopoulos from speaking to a Republican group. These activists obviously do not believe in the 1st Amendment, our U.S. Constitution or free speech, so possibly they would be more comfortable in an Islamic dictatorship like Iran.

In both Berkeley and Tehran, demonstrators were spewing anti-American hate speech while being totally uninterested in recognizing opposing views. In Tehran, Iranian protesters waved posters of Donald Trump being punched. Similarly, in Berkeley and other cities, leftist demonstrators have demonized, ridiculed and threatened Donald Trump and his supporters. The protest at Berkeley was not an isolated incident. At the Women’s March in Washington D.C., Madonna claimed that she had thought about “blowing up the White House.”

In Tehran, demonstrators are controlled by radical Islamic clerics who encourage the anti-American protests every year. Iranians do not have the right to oppose these religious leaders for there are no free speech rights in their country. Based on a recent report by Reporters Without Borders, Iran ranked as the fifth worst country in the world in regards to free speech and freedom of the press. Instead of blaming Donald Trump for all their problems, these protesters should be demonstrating against their country’s tyrannical regime.

In the United States, the political left has exploded into violent protests since the election of Donald Trump as President. These leftist mobs are funded by George Soros, communist groups and other extremist organizations like Black Lives Matter.

The purpose of demonstrators in both Tehran and Berkeley is to bring about the destruction of our nation’s constitutional republic. Many of the Soros backed demonstrators want to overturn the election, impeach Donald Trump and disregard the vote of the people. These dangerous activities go against the history of our nation. One of our hallmarks has been the peaceful transfer of power from one administration to the next. In this case, crazed demonstrators are not accepting the results and acting in a very counterproductive manner that may have long range negative implications on this country.

In Iran, the mullahs want to spread terrorism and radical Islamic rule. The country is the largest supporter of terrorism in the world. There is irrefutable evidence that the Iranians fund terror groups such as Hamas, Hezbollah, and the Houthis in Yemen. Sadly, the recent nuclear agreement with the country included billions of dollars in payoffs that will be used to support more terrorism. In addition, the Iranian release of American prisoners was also accompanied by a $1.3 billion ransom. In effect, the outlaw regime was rewarded for unlawfully jailing innocent Americans.

One common thread in these demonstrations has been a hatred of President Donald Trump and his policies. After examining the dangerous goals of both groups, it is obvious that the President is on the right path.

Interested in more national news? We've got you covered! See More National News
Previous Article PRAGER U: Don’t Compare Yourself To Someone Else
Next Article Today’s Tucker Carlson Fix: Scott Greer, Author Of “No Campus For White Men”