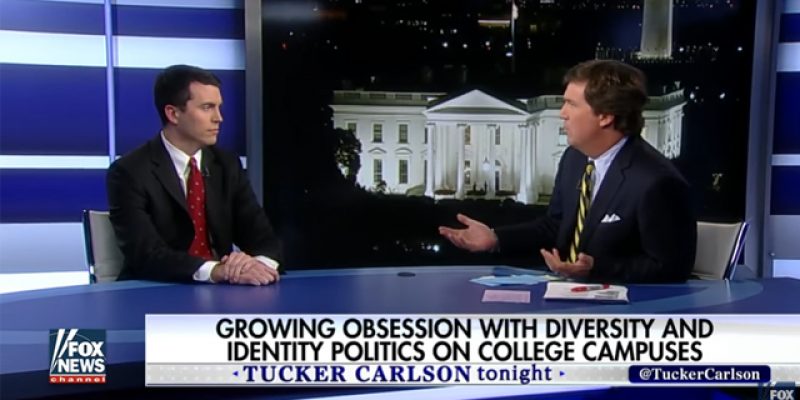 This isn’t your typical Tucker Carlson segment in which he eviscerates a leftist idiot – instead it’s a little more informative. The guest is Scott Greer, who’s an editor at The Daily Caller, which Carlson helped to found a few years back, and he’s written a book about the social-justice mob on college campuses and how out of control they’ve gotten. Carlson interviews him about his book and its subject matter, and a good discussion ensues.

That American higher education has been completely taken over by the Left, outside of a few disciplines in which leftists struggle mightily to impose their worldview – like engineering, medicine, to a little lesser extent business – is not a surprise. But a point brought up by Greer, and a good one, is that when you apply your typical campus victimhood narrative to other subject matter, like the humanities, for example, the same universality which applies in engineering used to apply.

In other words, it used to be recognized that if you’re going to have an English Literature class it would have to study the works of Shakespeare and Milton because of the universal truths and observations about human nature to be found in their writings, and defenders of the humanities would point to those truths and argue, not without merit, that it was just as important for a well-rounded and educated individual to understand those lessons as it would be to understand the human respiratory system, let’s say, or the chemical processes in oil refining.

The reason it’s more than just politics to decry the takeover of the universities, and particularly the takeover of liberal arts departments, by the social-justice mob is the destruction of actual education they’ve wrought. You can no longer count on an English Lit class to teach those universal truths found in Shakespeare because Shakespeare was a white guy and probably racist. He has to be balanced out by Toni Morrison or Carlos Fuentes, because the identity, rather than the substance, is what’s important.

You can’t build a petrochemical plant based on lessons learned from an authority chosen based on racial or ethnic identity.  Those lessons must reflect truth and reality, regardless of where they came from. And it used to be that the humanities adhered to the same standard as the hard sciences, which is what made American universities great. Now, they’re no longer great. Now they’re a racket, and a jobs program for people who aren’t interested in gainful employment.

Higher education is in desperate need of the creative destruction the market provides to punish such failure. Greer’s book points out that need, and it should be bought and read for that reason.