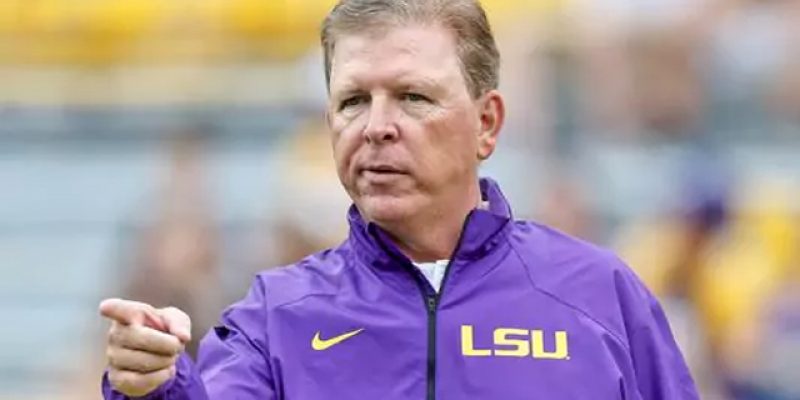 This is remarkable, and it comes from the Miami Herald’s Armando Salguero, who last week wrote a piece containing a lengthy interview of Hall of Fame defensive end Jason Taylor, who spent much of his outstanding career as a Miami Dolphin. The interview is worth a read in full, but for LSU fans the chunk of it having to do with the year Taylor played for Cam Cameron, who was the head coach of that team in 2007 before being fired, and ultimately signing on as Les Miles’ offensive coordinator from 2013 to 2016 when he was fired after four games, is eye-opening.

Not that anything Taylor says is particularly foreign, but the validation from his statements is something to hold onto…

Notice Cam Cameron is not among Taylor’s list of favorite coaches?

“Cam was an idiot,” Taylor says. “I have no idea how he got the job. I’ve never been around a more incompetent head coach than Cam Cameron. I’m talking youth football, college. It was unbelievable.

“Everything we did, he had to have a problem with. That was his way of being the biggest voice in the room. If I talked or Zach talked in a team meeting or after practice, he would always need to have the last word.

“It was the weirdest thing. We’d all look at each other because he would repeat something one of the players already said. That dude lost me first day of training camp. Even at minicamp, I’m wondering what are we doing?”

Cameron lasted one season. He was fired after the 2007 Dolphins finished 1-15, and that remains the worst season in Dolphins history — something that didn’t surprise Taylor.

“So every year in training camp Zach and I would sit down at the beginning of camp,” he says. “It would be lunch or dinner and it would always naturally flow into, ‘All right, whaddya got? Whaddya think?’

“It was after a few days in pads when you’d start to see the pajama warriors disappear a little bit. So we’d be eating and eventually we’d make a prediction on the season. Most years, we’re going to be 10-6 or 8-8 or whatever.

“We both sat down in that lunch room in 2007 and it went to that conversation. And this is a week into camp and we started talking about it and Zach says, “Dude, you know we’re [screwed].’ I’m sitting there and I think about it and say, “Yeah bro, it’s going to be a long season.’ That’s a bad feeling when you’re going to work and you realize we don’t stack up. We need a miracle to win some of these games.”

Cameron’s tenure as LSU’s offensive coordinator was relatively undistinguished. He looked reasonably competent in 2013, his first year, when LSU went 10-3. Of course that was largely due to the fact that LSU had Jeremy Hill, who has 2,757 yards and 29 touchdowns after three years for the Cincinnati Bengals, at tailback, and he was backed up by Terrence Magee, Alfred Blue and Kenny Hilliard, who are all in the NFL, and he had Odell Beckham, Jr. (288 receptions, 4,122 yards, 35 TD’s in three years with the New York Giants) and Jarvis Landry (288 receptions, 3,051 yards, 13 TD’s in three years with the Dolphins) as his starting wide receivers, along with James Wright as a backup who’s in the NFL despite not catching a single pass as a senior that year. And that was Zack Mettenberger’s senior year playing quarterback; Mettenberger plays for the Steelers as a backup.

Oh, and by the way – four of the five starters on the offensive line are in the NFL as well – Vadal Alexander, Trai Turner (who made the Pro Bowl in 2015 with the Panthers), Jerald Hawkins and La’El Collins. With that personnel, LSU was a middle-of the-pack SEC offense. Which brings us to 12 offensive players on that team who have gone on to play in the NFL – not counting Travin Dural and Ethan Pocic, who will be drafted and likely make the number 14. If that doesn’t go down as the most talented mediocre offense in SEC history, we’d be shocked, but there is Cameron’s legacy for you.

And in 2014 and 2015, LSU was a dumpster fire on offense, as our readers are well aware, as they were in 2016 before Cameron was dismissed along with Miles after a bitterly disappointing 2-2 start. It isn’t like LSU was bereft of offensive talent in those years, though matching the 2013 team is a damn hard thing for any college team to do. Miles wouldn’t even get rid of Cameron when the latter came within an inch of costing him his job at the end of the 2015 season – a mistake he paid the ultimate professional price for just four games later.

One day, perhaps, players from LSU’s 2013-2016 teams will be interviewed by newspaper columnists after great NFL careers and say something similar about Cameron to the bomb dropped by Taylor. It’ll be no less of a surprise when they do as when Taylor did it last week.