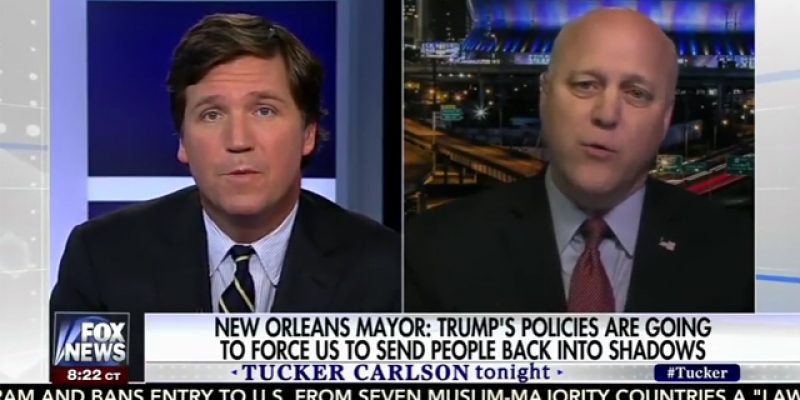 …it went about as well as you’d expect it to.

Carlson came armed with statistics showing that New Orleans’ crime rate is skyrocketing over the past year and asked Landrieu, who denies his city is a sanctuary city, whether his policies are working. Carlson doesn’t make the case that failing to adequately cooperate with ICE to deport criminal illegal aliens has anything to do with the rising crime in the Big Easy, but the implication is that his sanctuary city policies go hand in glove with other mistakes which have led to less-effective law enforcement.

People in New Orleans understand this – that it’s not sanctuary policies which have caused the problem, but rather the consent decree Landrieu entered into with Eric Holder’s Justice Department which neutered the NOPD as an effective law enforcement operation. One gets the impression Carlson knows this as well but doesn’t press the issue because to do so would make for a lot longer segment than he had time for.

Instead, he interrogates Landrieu over some of the more incendiary things he’s said about Donald Trump, and doesn’t particularly stand for Landrieu’s attempts to walk back those statements and act like Trump is his pal.

It’s a polite, even cordial, exchange, but Landrieu comes off poorly – he gets exposed to a large extent as a two-bit bullshit artist who has neither solutions nor the sand to combat the criminals in his city. Carlson doesn’t yell and scream at him, but at the end there is a distinct feeling that the host simply isn’t impressed.