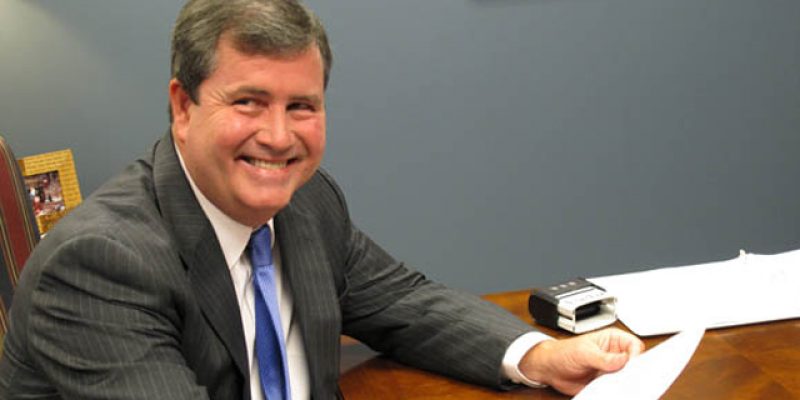 This isn’t much of a surprise, as it’s been discussed quite a bit since John Kennedy won election to the Senate and names have been bandied about for the resulting special election this fall to replace him.

Riser, who’s been a popular state senator and a very reliable conservative vote on both economic and social policy but who almost inexplicably suffered a devastating defeat at the hands of Vance McAllister in a 2013 special election for the congressional seat in Louisiana’s 5th District, would seem to make a strong candidate for Treasurer. He can point to a solid record on fiscal issues, and geographically he should be well-poised to make a runoff so long as there are no other North Louisiana candidate in the race.

When Riser ran for Congress, he was accused of lacking a message sufficient to the seat he sought to fill, and that gave space to his opponents to cast him as just a cog in the Bobby Jindal political machine. It’s clear from what’s below, which was an e-mail circulated to his previous supporters on Monday, that this time the senator from Columbia is determined to control his message in a more forceful way.

To the Taxpayers of Louisiana,

On this day, when we commemorate the birthday of one of the greatest Americans ever, President Ronald Reagan, I am writing directly to you, my fellow citizens across Louisiana.

It’s a new year…and with a new year comes new hopes and dreams. I am excited about what 2017 holds, not only for my family and me, but also for our great state.

The last year has certainly had its challenges and setbacks. But we have shown the world that the people of Louisiana are a strong and tenacious bunch. Just like all the times before, we have come back stronger, and I know that this time won’t be any different.

As we begin 2017 and approach the start of a legislative session, we are met with some not so pleasant news regarding our state’s financial situation. Just last month, the state’s Revenue Estimating Conference (REC) announced that the state is short $313 million dollars from what was budgeted for the year. It’s time we accept the reality that our state’s ever growing expenses are outpacing our revenue and we must adjust our state’s budget according to that reality. Over the years we have heard elected officials say, “Let’s tax businesses because they aren’t going anywhere!” And guess what happened: Businesses ARE in fact leaving our state.

I don’t know about you, but quite frankly, I’m tired of hearing this same news year after year.

When I first ran for the Senate in 2007, I was like so many of you across our state. I was frustrated with the way government was working…or not working. I was tired of feeling like every time I turned around—there was the state trying to take more of my hard-earned resources…or my freedoms. So I made the decision that, instead of just sitting on the sidelines complaining about it, I would run for the Senate and try to make a difference. I was elected, and I’ve been a proven and consistent conservative vote in the Legislature. I haven’t just talked the talk, but I have walked the walk. I have authored and passed legislation restructuring bloated and inefficient government bureaucracies, streamlining processes and saving the taxpayers money as a result. I have voted against tax increases and the desire to increase the burden on our families and businesses in Louisiana. And, on occasion, I have been the only NO vote in the Senate. Sometimes it’s hard to stand alone, but I didn’t run for office to do what was easy. I ran to do what was right. I haven’t just repeated conservative talking points in an attempt to say what the people want to hear. I have actually done it! I never ran for office to be popular, or for everyone to like me. I ran to make a difference, and sometimes that means standing all alone for what’s right and for the people of this great state. Have I been able to accomplish everything that I had hoped I would, or solved all the problems that exist throughout our state government? Absolutely not, but I do believe I have made a difference. So that is why I am writing this letter to you today.

Next week, I will be formally announcing my candidacy for the office of Treasurer of Louisiana.

I am clearly the most qualified candidate for this position. I am the only person in the race who has served on the state’s Bond Commission, which the new Treasurer will chair. I have served as Chairman of the Senate Revenue & Fiscal Affairs Committee. As a member of these panels, I have consistently fought to eliminate wasteful spending and reduce the tax burden on families and businesses across our state. I have seen firsthand the out of control government waste and have time and time again done all I can to influence and change the way we do business. It’s quite obvious that the way our state does business is out of date and must be changed if we ever expect to truly put our state back on a solid financial footing. We MUST NOT continue to operate with a business as usual attitude. Our state cannot afford it.

For far too long, we have simply sent our hard-earned resources to Baton Rouge…and then just taken what was given to us in return. It’s like we are expected to just be grateful as though the state has done us some sort of favor. But it’s our money!

The old saying is true: Government has no money except for the money that it has first taken from its citizens. It’s time we demand that the state’s elected officials be good stewards of our money, just as we must be in our own lives each and every day. Families and businesses are expected to live within their means, and our state should too! Politicians have time and time again made commitments to our people, only to come back later and say, “Sorry, the State miscalculated and now you don’t make the cut.” Families and businesses should see stability and certainty from our state’s finances, not uncertainty at every turn.

Over the years, Treasurer (now U.S. Senator) John Kennedy made the office of Treasurer more important than ever by bringing attention to key fiscal issues affecting taxpayers on a daily basis and exposing the wasteful spending of our state government. As Treasurer, I will continue that tradition.

Those who know me know that I’m not a big talker, and that I don’t talk just to be heard. I’m a doer. I don’t mind fighting when it’s time to fight. And fellow taxpayers, it’s time to fight. Stand with me, shoulder to shoulder, and let’s take back our government. Let’s make it do what it was always intended to do…work for us.

At some point, we have to begin to change the system that is causing these problems.

As my record shows, I will always stand for the people of this state even if I am the only one. But I am asking you, the good people of Louisiana, to stand with me. Together, let’s free our state of the problems that have burdened us and set our state on a new path…a path of accountability and fiscal responsibility.