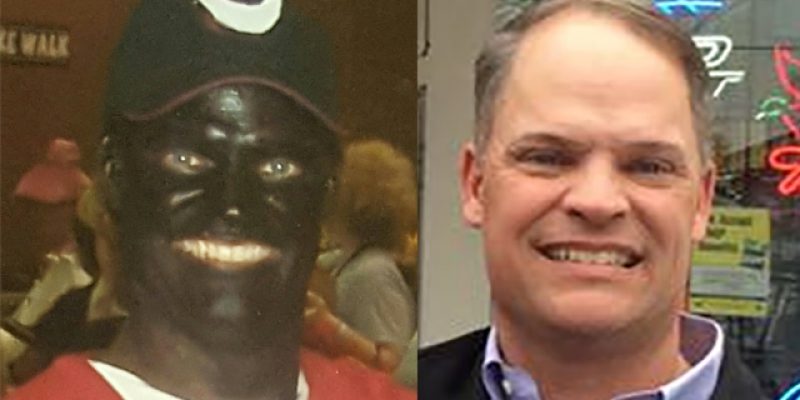 UPDATE: And Tuesday Gatti went on the radio in Shreveport to explain further, but cracks appeared in his story.

From the Shreveport Times…

“I’m sad that my opponents have taken a good night at church and turned it into negative, political mud, but I’m confident the voters of Bossier will not fall for their desperate attacks,” he said.

Gatti, a military officer and the brother of State Sen. Ryan Gatti, explained in a statement to The Times that the photo was taken 15 years ago during a fall festival at his church and that all the volunteers were told to dress as famous people.

“Tiger Woods was at the height of his popularity, as a world champion, and that was who I was dressed as,” he said. “Shortly after this event, I was ordained in this church. As a medical professional, ordained minister and military officer, I live my life seeing only character and I stand by that.”

It will be interesting to see whether the public buys that it’s “a good night at church” when one commits one of the more justifiably frowned-upon acts of political incorrectness.

At Gatti’s campaign Facebook, there was this over the weekend…

Elizabeth Baptist Church is, we’re told, a racially mixed congregation with a majority of black parishioners. One wonders how many of them would think blackface costumes are integral to “a good night at church.”

Heretofore, perhaps the most controversial action in Gatti’s background was that he donated office space to the John Bel Edwards gubernatorial campaign in 2015 (the rumor mill has generated word Edwards is repaying that kindness in Gatti’s race; evidence of which is that Edwards insider Alton Ashy, a lobbyist whose clients include unions and hospitals, gave Gatti a max-out campaign donation earlier this year). That has changed.

Interested in more national news? We've got you covered! See More National News
Previous Article VIDEO: Cassidy, Chaplain Booed For Invocation At Metairie Event Last Week, On Fox & Friends
Next Article Robbie Gatti Takes To The Radio To Explain His Blackface Photo, But Does It Wash?