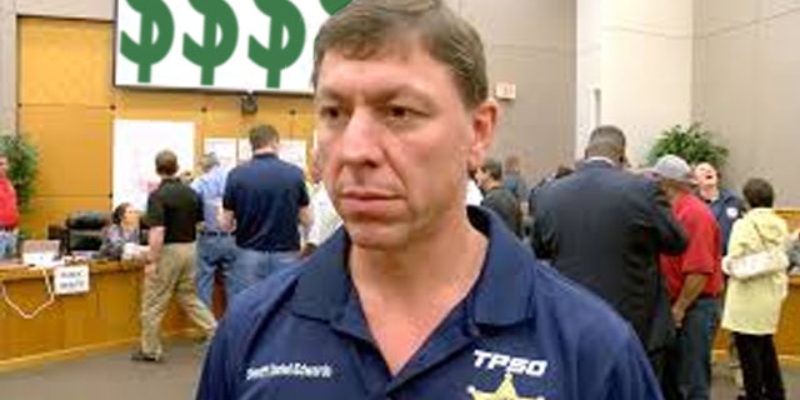 The Advocate had a very hard-to-read article last night with the details of the murder of Tommy Smith, an inmate in the Tangipahoa Parish Prison who was beaten to death Jan. 30.

Tommy Joe Smith, a 40-year-old Independence man, was just trying to find a bunk in a dorm at the Tangipahoa Parish Jail last week after he was booked on a probation violation associated with an earlier conviction for a sex crime.

But most of the 21 other inmates in the dorm to which Smith was assigned late on the night of Jan. 30 took umbrage at his presence, according to Tangipahoa Parish Sheriff Daniel Edwards.

When Smith threw his stuff on a bunk on the second floor of the dorm, he was told he wasn’t welcome. When he went to the first floor, he was told the same thing.

In both encounters, Smith was described in a Sheriff’s Office news release as “compliant and non-confrontational.” Smith then tried to notify a guard that he needed to move.

But before he could speak to a guard, he was hit from behind. When he turned around, a group of 12 inmates attacked him, beating Smith to death in an attack that witnesses likened to a “shark feeding frenzy,” the release said.

The release does not say how long it took guards to notice that a fight had broken out. When they did, it says, deputies were able to regain control of the room within minutes. They found one of the attackers attempting to administer aid to “Smith’s lifeless body,” according to the release.

Jail medical staff and emergency medical personnel were unable to resuscitate Smith, and Coroner Rick Foster ruled Smith died from blunt-force trauma to his head that caused bleeding in his brain.

Edwards insisted that all jail personnel acted appropriately. “Through an investigative account of this incident, it has been discovered all protocols relating to a response to such an event were performed expeditiously,” Edwards said in the statement.

Neither Edwards nor his spokesman returned calls and emails seeking comment Thursday.

The DA in Tangipahoa, Scott Perrilloux, is now trashing the sheriff over the quality of the jail.

Scott Perrilloux, the district attorney for the 21st Judicial District, which includes Tangipahoa Parish, said stories of problems at the jail have percolated for some time.

“There’s a lot of anecdotal evidence that the jail is in a state of chaos,” Perrilloux said.

This all comes down to Daniel Edwards, the sheriff in Tangipahoa and the brother of Louisiana’s governor, and the job he’s doing. Our readers are aware that Edwards had his office raided and treated like a crime scene and his laptop computer put in an evidence bag by the FBI thanks to an investigation into drugs walking out of evidence lockers there and ending up on the streets as a result of a friend of his who worked for the DEA running a “steal and deal” scam. Now his management of the prison in Tangipahoa is beginning to look criminal as well. There was a well-publicized 2014 case involving another inmate who was raped in that jail three times before the deputies stepped in to stop it and give him medical attention; at least the rape victim survived.

Unlike in the case of Smith, whose family doesn’t seem to be impressed with the explanation that all protocols relating to a response to such an event were performed expeditiously, whatever the hell that means.

There are some people in our inbox telling us we should be looking into Tommy Joe Smith and his connections around Tangipahoa and checking into the question whether he was killed so he couldn’t talk to the FBI. We’re going to wait for the folks actually investigating the sheriff’s department there to come back with some reason to think there’s anything to that, but it’s not outside the realm of imagination to think a death like Smith’s could have something underlying it more than just that he was inside as a result of violating his probation as a sex offender (inmates don’t like sex offenders, as you know).

But that’s not central to this. What is central is that Tangipahoa Parish, and its sheriff’s department in particular, is rapidly becoming a disgrace to the rest of the state. And it’s clear the jail there isn’t a safe place to warehouse state inmates paid for by Louisiana’s taxpayers, or anybody else, for that matter – regardless of whether the sheriff running that jail is the governor’s brother.

Interested in more news from Louisiana? We've got you covered! See More Louisiana News
Previous Article Have You Seen Louisiana’s Ambitious, Though Achievable, Growth Goal?
Next Article In Case You Missed Ted Cruz’ Taking A Flamethrower To Liz Warren And The Democrats Yesterday…