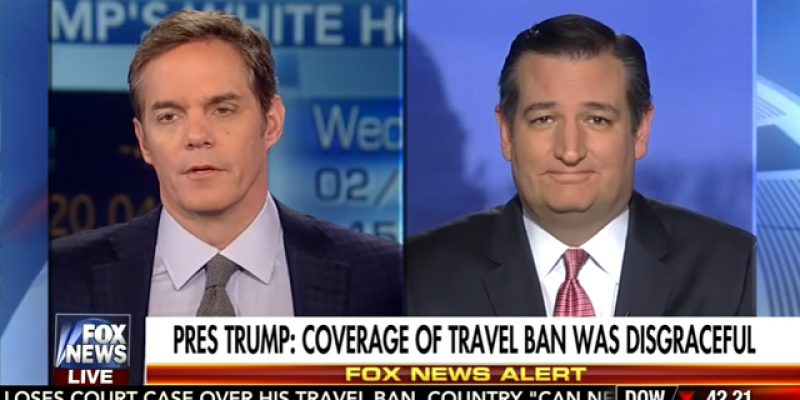 …here’s your chance to catch up. This was an appearance the Texas Senator made yesterday morning on Fox News with Bill Hemmer.

Cruz pulls absolutely no punches, and it’s clear he’s not too impressed with the all-night bitch-fest the Democrats staged Tuesday night to protest the nomination and impending confirmation of Jeff Sessions as the nation’s Attorney General. And in particular Cruz isn’t a fan of Elizabeth Warren, the faux affirmative-action baby academic who chose to verbally assault Sessions as a racist before Senate Republicans shut her down using a rule prohibiting the slander of a fellow senator on the floor.

That’s not all. Cruz talks about President Trump’s immigration order and the court case arising from it, and while predicting it will likely be a Supreme Court decision he declares it ought to be unanimous, as he says the law is clear. He hammers the Democrats in the Senate for how they’re acting and says the Dems’ anger is actually directed at the American people. And he also discusses a little about Obamacare and what a Republican rebuild of the health care system would look like.

It’s a seven-minute tour de force, and it shows that in Cruz, the GOP has someone in Washington who’s willing to be just as brutal and vitriolic as Chuck Schumer, Liz Warren and the rest of the bomb-throwers the Democrats have can be.

Interested in more national news? We've got you covered! See More National News
Previous Article The Details Of That Murder In Tangipahoa Parish Prison Make It Sound Like It Ought To Be Shut Down
Next Article Here’s a Weekly Webshow For You to Check Out