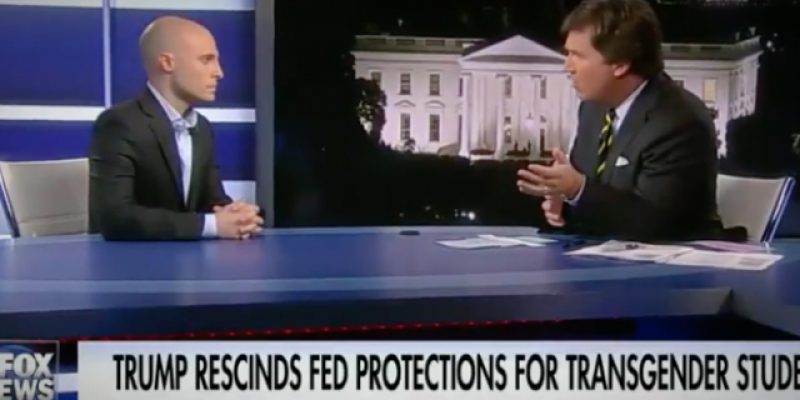 This guy’s name is Zack Petkanas, and he’s a senior adviser to the Democrat Party. One would suspect this means he’s one of their better mouthpieces on the issue of transgender bathrooms, but as it turns out that doesn’t say much – because despite having gone completely ballistic Thursday over news that Donald Trump had committed the unforgivable atrocity of…getting the federal government out of the business of policing who goes to which restroom, he failed badly to offer anything resembling a coherent argument about why this is properly a federal issue.

Carlson hit Petkanas with bomb after bomb, asking very basic questions like why doesn’t Barack Obama deserve criticism for having the same policy as Trump now has for seven out of the eight years Obama was in office? And what scientific basis is there to qualify gender identity if it isn’t based on biology? Carlson also asks what would stop him from deciding he’s like to identify as a woman and then demand to be allowed to play on a women’s field hockey team, and so on. And in each case, Petkanas has answers which don’t really even qualify as poor. They’re unresponsive. They assume bad faith on Carlson’s part and substitute snark for reason and logic.

It’s a devastatingly unpersuasive performance, and this by someone who is supposed to have the Left’s position on the transgender issue well in hand. If that’s so, this is an Emperor’s New Clothes moment, because it would tend to show that the effort to insert men into women’s bathrooms is based on little more than a desire to upset the societal applecart rather than install a legal framework which actually makes sense.

Prediction: the transgender fad begins to lose steam now that Trump chose not to prop it up by continuing Obama’s directive that schools across the country humor it.