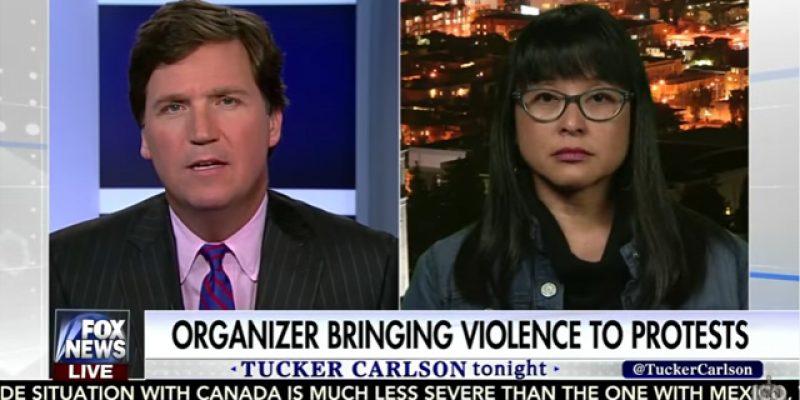 This woman’s name is Yvette Felarca, and she is a public school teacher (teaches at Martin Luther King, Jr. Middle School in Berkeley, California) – which is very unnerving.

Felarca is with an organization called By Any Means Necessary – that’s the short name; the whole name of the organization is The Coalition to Defend Affirmative Action, Integration, and Immigrant Rights and Fight for Equality By Any Means Necessary – which bills itself as “anti-fascist,” but whose tactics are the very definition of fascist. They show up to “protest” people they don’t like and immediately resort to violence as a means of denying a platform to people they disagree with. That’s precisely what happened on the campus of the University of California at Berkeley two weeks ago, when a riot broke out in response to a scheduled speech by Milo Yiannopoulos in a lecture hall there. Felarca’s group was also responsible for a riot in Burlingame, California last year when Donald Trump attempted to get to a speaking engagement at the California State GOP convention.

It’s a commonly-used warning these days about people on the “other” side of the political fence that they’re zealots or fanatics or radicals, or that they give off a vibe that they’re brownshirts, etc. It’s overused, in fact. And that’s a shame, because if you watch the 10 minutes of Carlson’s interview with this woman what you see is the real thing. This really is a zealot and a radical and a brownshirt. This is somebody who openly advertises she is for showing up at an event at which someone is scheduled to speak and “de-platforming” them – denying, by violence if required – a public venue and an audience, and when challenged on the basis that such tactics are clearly beyond the pale in a civil society proceeds into a programmatic rant about the evil conspiracy in which those she disapproves of are engaged. And the level of projection involved will simply make your head spin.

This is the type of person who can commit evil on a wide scale. The mentality on display in this interview is what gives rise to violent revolution and gross atrocity.

Yvette Felarca isn’t a wannabe. She’s the real thing. She’s an actual domestic terrorist in the making, and she’s open about it.

Interested in more national news? We've got you covered! See More National News
Previous Article Have You Seen The Crazy Video Of The Wasted Ole Miss Student Head-Butting The Cop?
Next Article The Race Is On, Apparently, To Succeed Roger Villere As Louisiana’s GOP Chair