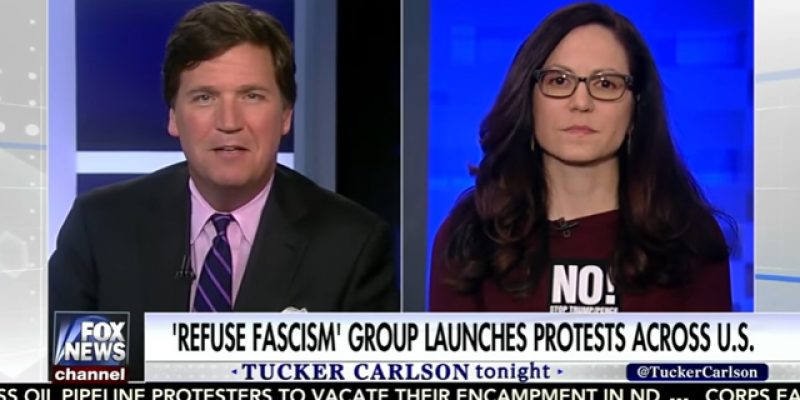 We didn’t catch this woman’s name, but she’s with an organization called “Refuse Fascism” and she’s calling for a mass movement to depose Donald Trump from office.

We’re sharing this because of the hilarious irony involved in people who call themselves “anti-fascist” engaging in advocacy for activities which in themselves smack of fascism. Deposing legitimately elected officials by use of violent ends is precisely how Hitler came to power in Germany; it was his brownshirts in the streets shutting down political opponents which cleared the field for him to attain power, and it was his people burning the Reichstag which allowed him to assume dictatorial powers. If you listen to these radical anti-Trump people who equate him with Hitler for very long, what you’ll hear is an endorsement of Nazi and fascist tactics in order to fight “fascism.”

They don’t have a clue what fascism is, but they’re very passionate about the subject.

We’re just hoping this woman is single and stays that way. Insanity like this probably doesn’t need to be promoted in the gene pool.

Interested in more national news? We've got you covered! See More National News
Previous Article It Looks Like They Really Are Going To Make Keith Ellison The New Chairman Of The DNC
Next Article The Red Bayou Show, Episode 74 – Featuring John Schroder