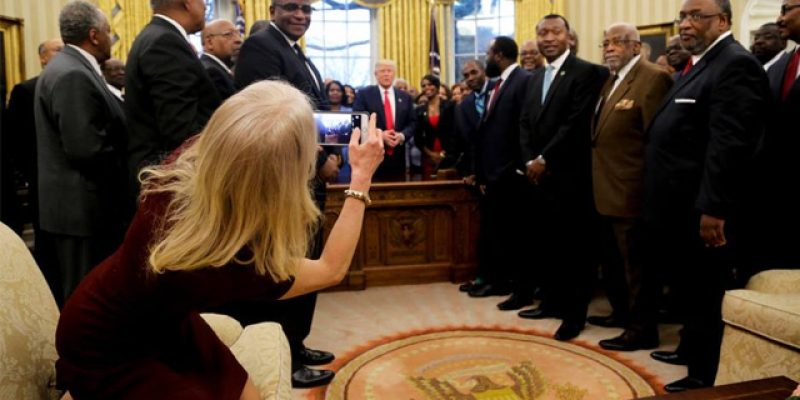 …so there’s that. At least, he hopes so.

After a discussion with people I know and trust I understand the way my remarks have been received by many. I have consistently been a champion for women and women’s issues, and because of that the last thing I would want to ever do is utter words that would hurt or demean them. I apologize to Kellyanne Conway and everyone who has found my comments to be offensive.

He actually threw in that he’s a “champion for women and women’s issues” as some sort of talisman protecting him from criticism for calling Conway a whore.

Which means it’s not so bad for him to call Conway a whore seeing as though he’s pro-abortion. That’s what it means, and by extension it indicates because Conway is pro-life she can be demeaned.

Is that a stretch? Well, Conway didn’t think so. Asked last week about the Richmond kerfuffle here’s what she said…

Kellyanne Conway believes the news media would be more outraged about a Democratic congressman’s crude joke that the White House staffer looks “familiar” with being on her knees if she were a pro-abortion woman, she told The Daily Caller, adding that she believed the joke was sexist.

Why would Cedric Richmond even bother throwing in the bit about “women’s issues” if Conway wasn’t right?

That’s a shot at the very large number of women in Richmond’s district and elsewhere who don’t necessarily buy into “women’s issues.” Somehow Richmond thinks making a point to bring that up means he’s entitled to skate with a perfunctory apology.

This controversy is over, but Cedric Richmond shouldn’t just be given a pass on it. It’s time to find and fund a candidate against this man and make him actually earn re-election in 2018.

Interested in more news from Louisiana? We've got you covered! See More Louisiana News
Previous Article VIDEO: Mark Levin Goes On Fox & Friends, Lays Out The Proof That Trump Was Surveilled
Next Article PRAGER U: There Is No Gender-Based Wage Gap