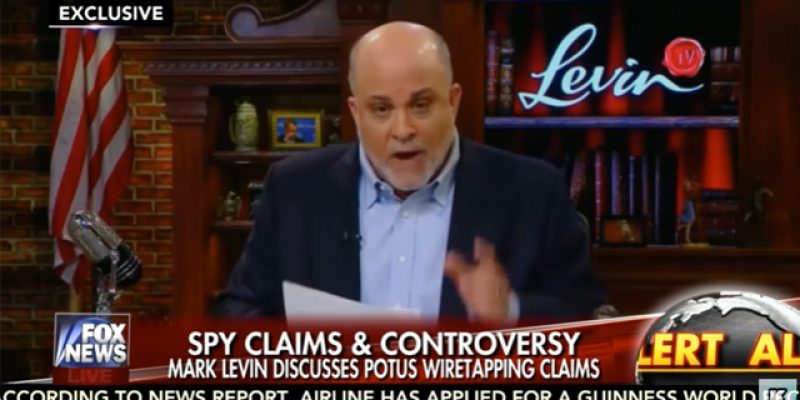 This has been a fairly interesting political weekend, as the aftershocks continue to reverberate following President Trump’s series of tweets Saturday morning accusing his predecessor of “tapping the phones” at Trump Tower.

The response from the other side has been fairly predictable – fairly widespread denials, but interestingly enough those closest to the president have been more nuanced than those in the media. That’s perhaps not much of a surprise – the partisans at NPR who accused Trump of making “evidence-free” allegations aren’t likely to be called in front of a congressional hearing to defend their statements, while Obama spokesmen and spin doctors have a bit more exposure to legal scrutiny.

Tapper’s complaint is that following those tweets Trump should have offered evidence of the wiretapping. That isn’t altogether unreasonable – Trump could, with a few strokes of a pen, declassify the FISA applications in June and October which the Justice Department apparently pursued in an effort to gain proof that Trump was colluding with the Russians, and following Saturday’s twitter-storm one would think that, rather than to call on Congress to investigate, would be the next step.

But the choice of tactics doesn’t mean the accusation lacks merit. Sunday morning, Mark Levin went on Fox News with references to several mainstream media sources showing that the surveillance Trump complained about on Saturday was an actual, real thing and that it’s inconceivable Obama was unaware of it.

It should also be recognized that the Obamites didn’t deny the surveillance. Obama’s official spokesman said the White House didn’t order it, which as Andy McCarthy at National Review noted, is a pretty weak denial…

This seems disingenuous on several levels.

First, as Obama officials well know, under the FISA process, it is technically the FISA court that “orders” surveillance. And by statute, it is the Justice Department, not the White House, that represents the government in proceedings before the FISA court. So, the issue is not whether Obama or some member of his White House staff “ordered” surveillance of Trump and his associates. The issues are (a) whether the Obama Justice Department sought such surveillance authorization from the FISA court, and (b) whether, if the Justice Department did that, the White House was aware of or complicit in the decision to do so. Personally, given the explosive and controversial nature of the surveillance request we are talking about – an application to wiretap the presidential candidate of the opposition party, and some of his associates, during the heat of the presidential campaign, based on the allegation that the candidate and his associates were acting as Russian agents – it seems to me that there is less than zero chance that could have happened without consultation between the Justice Department and the White House.

Second, the business about never ordering surveillance against American citizens is nonsense. Obama had American citizens killed in drone operations. Obviously, that was not done in the U.S. or through the FISA process; it was done overseas, under the president’s commander-in-chief and statutory authority during wartime. But the notion that Obama would never have an American subject to surveillance is absurd.

Third, that brings us to a related point: FISA national-security investigations are not like criminal investigations. They are more like covert intelligence operations – which presidents personally sign off on. The intention is not to build a criminal case; it is to gather information about what foreign powers are up, particularly on U.S. soil. One of the points in FISA proceedings’ being classified is that they remain secret – the idea is not to prejudice an American citizen with publication of the fact that he has been subjected to surveillance even though he is not alleged to have engaged in criminal wrongdoing.

Then there was Ben Rhodes, who said something similar that you can recognize if you dig through the venom…

No President can order a wiretap. Those restrictions were put in place to protect citizens from people like you. https://t.co/lEVscjkzSw

That is not a denial the surveillance took place. It’s an assertion it didn’t come from the White House. That, as McCarthy noted, is a dishonest assertion – but it’s an assertion nonetheless.

If there were the wiretap @realDonaldTrump loudly alleges, such an extraordinary warrant would only have been OKed by a court for a reason.

So again, no denial the wiretapping took place. Instead, an attempt to justify it by doubling down on the Democrats’ claims that Trump colluded with the Russians to win the election – claims that, regardless of everything else which may be true about this controversy, haven’t borne out at all.

James Clapper on MTP: “there was no wiretap activity against the President-Elect at the time, or as a candidate, or against his campaign.” https://t.co/KPskxX4fX0

Clapper didn’t say there was no surveillance activity. He said there was no wiretap activity. That could be a narrow statement which is true, or it could be an outright lie – something Clapper has been guilty of in the past.

After all, as Levin notes, the Obama administration was pretty chatty with friendly media sources last year about their investigations of the supposed collusion between the Trump campaign and the Russians. When the Guardian and New York Times are reporting this material, it’s not a particular secret. What’s changed is a couple of things. First, Trump actually won the election; had Clinton won this would have been waved off with a shrug and an explanation that the feds ought to be investigating potential foreign meddling in American elections. And second, Trump has decided to make a political issue of the surveillance and use it as a cudgel against Democrats attempting to make Russian connections a disqualification allowing them to dismantle his cabinet.

We’ll say it was a mistake for Trump’s press secretary Sean Spicer to demand a congressional investigation and to say the administration would have nothing more on the subject until one began. Releasing the FISA applications would have been a no-brainer, though Trump could certainly do that upon a request from Congress – and should NSA director Mike Rogers appear before a congressional hearing and state that yes, there was such surveillance and he should know since he headed that agency when it was charged by the FISA court to perform it, no one ought to be surprised.

At the end of the day, Tapper and others are asking us to believe that Trump, who one imagines has been briefed on this material at length since winning the election, issued those tweets with nothing else but posts at Breitbart and National Review to go on. If you’re a Democrat you can likely be sold on such a proposition. For the rest of us it will seem less likely – this instead will appear as Trump springing a trap on his opponents and taking their attacks on Sessions off the front page.

But he’d better have the underlying evidence Levin is talking about for Congress to uncover in that investigation, and the goods have to be genuine. That’s the difference between Obama being at the center of a major scandal, or Trump.