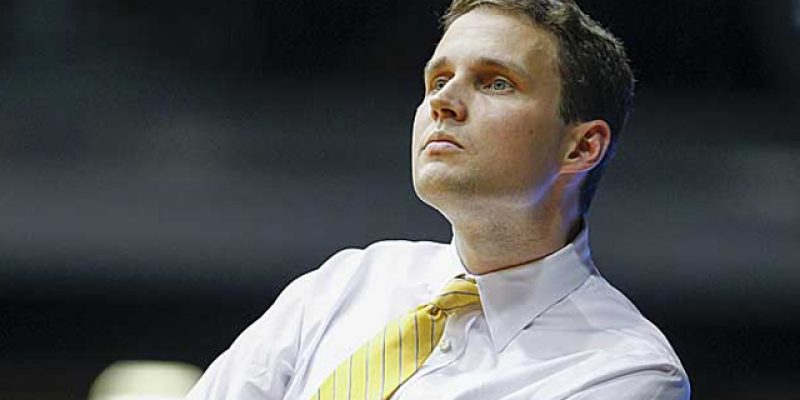 Editor’s Note: For recent developments, check out Monday’s live-blog of the coaching search.

At least, that’s the word leaking out into the media as of Sunday afternoon.

VCU head coach Will Wade has had discussions with LSU about replacing Johnny Jones and has emerged as one of the front-runners for the job, sources told ESPN.

The Baton Rouge Advocate had a little more on the contact with the Virginia Commonwealth head coach, whose team fell to a sensational St. Mary’s club on Thursday in the NCAA Tournament first round…

Alleva and Nunez declined to speak to The Advocate about the quick round trip, but ESPN reported later Sunday, citing unidentified sources, that VCU coach Will Wade “has emerged as one of the front-runners for the job.” VCU is located in Richmond.

A source confirmed ESPN’s report to the Richmond Times-Dispatch late Sunday afternoon, The Advocate has learned.

Sources tell me Will Wade has "high interest" in LSU job. One described LSU as his "dream job."

Worsham is also reporting Middle Tennessee State head coach Kermit Davis, who spent three years as an assistant at LSU under John Brady in the late 1990’s and just completed a 31-5 season with a loss to Butler Saturday in the second round of the NCAA Tournament, is another frontrunner for the job. Davis, however, is in negotiations with Middle Tennessee about a raise – which wouldn’t preclude LSU’s hiring him, but it would seem to indicate his intentions at present.

Meanwhile, CBS Sports’ Gary Parrish says LSU is also looking at former Indiana head coach Tom Crean, who was let go after a 19-16 season that ended in a 1st round NIT loss to Georgia Tech, a year after winning the Big Ten championship.

LSU, via a third party, has contacted Tom Crean to gauge his possible interest in coaching the Tigers, a source told CBS Sports.

LSU assistant athletic director Eddie Nunez spent a year in 1998-99 as the administrative assistant coach for Crean at Marquette.

It would appear the intensity of the Wade discussions is considerably stronger than that involving Davis or Crean. What to make of this?

First of all, Wade’s VCU salary is currently around $1 million per year, with bonuses and incentives that push him close to or above $1.5 million. VCU went as high as $1.8 in an effort to keep Shaka Smart, but the latter ultimately took the job at Texas. Smart was the third VCU coach using that program as a stepping stone to a Power 5 conference job; Jeff Capel, who had been an assistant at Duke before he was hired as VCU’s head coach, ultimately left for Oklahoma, and then Anthony Grant, who had been a Florida assistant before VCU hired him, left for Alabama. Smart, who had been an assistant to Grant, was next.

Wade, who was an assistant at VCU under Smart but got his start as a manager at Clemson and then coached under Tommy Amaker at Harvard, differs from Capel, Grant and Smart in that he actually built a program before taking the VCU job. Wade spent two years as the head coach at Tennessee-Chattanooga, going 18-15 (12-4 in the Southern Conference) and 22-10 (13-3) before he was hired to replace Smart. The Chattanooga team Wade left behind went 29-5 last year under Matt McCall, dropping to 19-12 after a 15-4 start this year.

The rumor mill says that Wade had shown lots of interest in the job, even going so far as to say he had a pair of Top 100 recruits he felt he could lure to LSU in the spring signing period. VCU’s recruiting class is currently ranked 35th in the country by 247 Sports, with three of four recruits ranked in the Top 200 (#97, #150 and #154). Wade’s first VCU recruiting class was ranked 43rd, with the 45th-ranked player in the country heading the class. He’s known as an outstanding recruiter.

VCU under Wade plays very high-pressure defense, and ranked 22nd in the country in defensive efficiency. The Rams ran into trouble at tournament time due to two weaknesses on the roster; their post players were both 6-7, though they did have a 6-9 player off the bench, and they struggled from the three-point line. Teams with more height and good shooters were able to give them trouble, though few clubs in the country were a tougher out. VCU’s nine losses came by a combined 69 points, with five coming to NCAA Tournament teams.

With the trip to Richmond to meet with Wade, it’s clear he’s in LSU’s crosshairs. What could be interesting is the late movement at Clemson, where Wade got his start in the college basketball world. The coach there, Brad Brownell, parlayed an 11-2 start to the season into a 17-16 finish which included an NIT first-round loss to Oakland University (which is located in Michigan, not California). It appears Brownell is getting another year, though…

Somehow, Brownell appears to have come out of that confab with his job … for now.

Apparently, buying Brownell out would cost Clemson $3.5 million, which is a princely sum leading Radakovich to stick with his coach. Without Clemson coming open, LSU would seem like the job for Wade to jump to – if Alleva offers it to him.

UPDATE: SECCountry.com cites an LSU source as claiming the contact with Crean was initiated by the coach, rather than LSU.

UPDATE #2: Scout.com’s Billy Embody says LSU could be on the verge of making a hire…

Can confirm that #LSU and VCU's Will Wade are in discussions about basketball coaching job. Expect this to move quickly one way or another.

UPDATE #3: And now, we have a Tom Herman reprise where Wade is concerned. Cody Stewart is a sports talk radio host in Richmond, and had three tweets about Wade and Clemson…

Developments on the Will Wade front. Per source, Clemson has entered the mix. His agent is also looking for a high $2M/yr contract #VCU

Even with Clemson "in the mix" their buyout for HC Brad Brownell is around $3.5M. If Will Wade took $2.5M, CLEM spends $6M virtually. Hefty.

And to clarify, the expectation is if Will Wade takes Clemson's offer, Brad Brownell will be let go immediately.