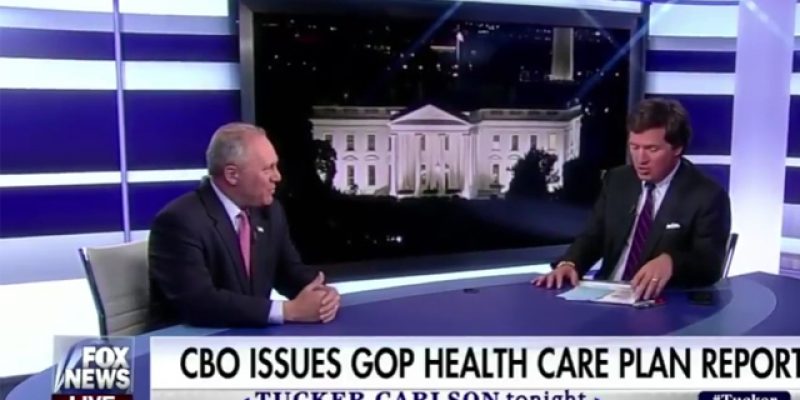 This was of a piece with other media hits the Republican leadership did yesterday in an effort to spin the Congressional Budget Office’s scoring of the American Health Care Act – which, of course, was more or less a disaster.

The headline most media outlets took from that score was that Ryancare, if that’s what you want to call it, would put 24 million Americans off health insurance. Not to take a position on the bill one way or the other (the position we’ve already taken is that Obamacare ought to be left alone to die with a few reforms introduced to allow the market to seep in and take over the health care industry rather than the government when the whole thing collapses), but it’s a fair critique of the CBO that if it was able to predict outcomes in the health insurance market it wouldn’t have been off by some 13 million people when it said Obamacare would put 25 million Americans on health insurance rather than the 12 million who actually signed up.

That was a point Newt Gingrich made yesterday when Gingrich took to the airwaves to say the CBO ought to have been abolished a long time ago and multiple bids should be taken by private firms (large accounting firms, for example) to score legislation – CBO’s track record for accuracy on items such as these is abysmal, and it’s of no value that it claims to be “nonpartisan.”

Scalise doesn’t go there, but like Ryan in his interviews the House Majority Whip digs into the CBO’s report to pull out some positives from the plan. For example, he cites CBO numbers to show Ryancare lowers premiums, taxes, and the deficit, and that’s true. Scalise also noted that support for the bill on the GOP side looks a lot broader than reported if you take notice of the votes so far – every Republican so far has voted for the bill in both the Ways and Means and Energy and Commerce Committees, which includes folks from all stripes inside the GOP.

And like Ryan he does have a good answer on this 24 million business – namely, that because the bill stops mandating that people buy health insurance it’s only natural that lots of people who don’t actually need it and can’t afford it wouldn’t buy it. And when those people choose not to purchase health insurance because of their own individual priorities which are none of the government’s business, that isn’t the government “dropping” them from coverage the way the score has been reported.

There is little hope it will be reported that way, but it is, in fact, the truth.

In case you’re not video-capable, some quotes courtesy of Scalise’s press release on the appearance with Carlson…

On the CBO estimate:

“What the CBO said is, if given the option, our bill actually gives people freedom. You don’t have to get on Obamacare, you can get off of Obamacare, and what CBO is estimating is even with taxpayer subsidies, they think 14 million people just next year will get off of Obamacare if given the choice. Meaning, you can still stay on it but if they want to get off, they have the freedom to do it, and 14 million will. That’s not lost coverage, that’s not throwing anybody off, but CBO calls that lost coverage. To me that means you just had the freedom to say ‘ I don’t want to be on Obamacare anymore and I got to make that choice for my family,’  and now you have better options because there’s going to be a competitive marketplace we create where you can go buy whatever you want for your family at a lower cost and CBO most importantly backs up the fact that when our plan is implemented, it will lower costs dramatically—double digits decrease in the cost of health care premiums for families.”

On the choice this patient-centered plan provides:

“What we’re doing is getting rid of Obamacare and then letting families make the choice of what they want to do for their health care. They get to pick their own plan, which is the opposite of Obamacare. Obamacare said no matter what you think and what you want for your family, if you like what you have, you can keep it only if an unelected bureaucrat in Washington says this is the plan you can have…

“The other thing is there’s going to be real options for you. If you look at Obamacare, one of the things it’s done is led to monopolies in about a third of the marketplaces across the country. So even if you’re out trying to buy insurance under Obamacare, you literally only have one choice, which is called a monopoly, which is why costs are up. It’s because all of the mandates are so unworkable that companies just stop writing policies. So what we’ve seen is that a lot of these insurance companies that left the marketplace said ‘Look, under your plan we will actually be able to come back in and write policies again for people that they want to buy.’ If you like what you have, you truly can go and buy it for your family.”

On ensuring Americans have access to health care options:

“But ultimately you get to choose the plan. That’s the most important thing. There are tax credits for people that are low-income, working people that can have the ability—right now you get a tax break if you get your insurance from your employer. About 61% of the people in this country get their health care from their employer. But what happens if your employer doesn’t provide health care? What happens if you’re a small business owner? We for the first time are actually giving the same tax break that employers get to families that can’t get it through their employer, and so they can go and buy whatever they want for their family, and we bolster Health Savings Accounts. One of the biggest success stories in health care, pre-Obamacare was HSAs—Health Savings Accounts, which actually lowered costs and gave people more options. Under Obamacare they literally obliterated the HSA market. We’re bringing that back so that families can actually go work through HSA’s and, again, get the ability to buy lower cost health care, what they want for their family, it’s their choice, not a government bureaucrat in Washington.”

On the broad support for the American Health Care Act: