This was as predictable as the sunrise after the hubbub of Chris Nakamoto’s WBRZ expose’ of the fraud engine that is the Baton Rouge Council on Aging. Somehow, for Nakamoto to expose that a crooked black woman has abused her authority running a taxpayer-funded quasi-governmental agency in order to defraud a black family out of some $120,000 and change is a sign of racism.

Remember when the CATS tax got approved, a black man was the head of CATS. The white business community attacked the agency. He resigned. They hired a white man with no transit experience to run CATS. That man has since resigned and we never got a better bus service. The attacks on the Council on Aging has less to do with bad leadership and more to do with white leaders not wanting blacks in charge of the tax dollars.

And why is Chambers saying this? Well… 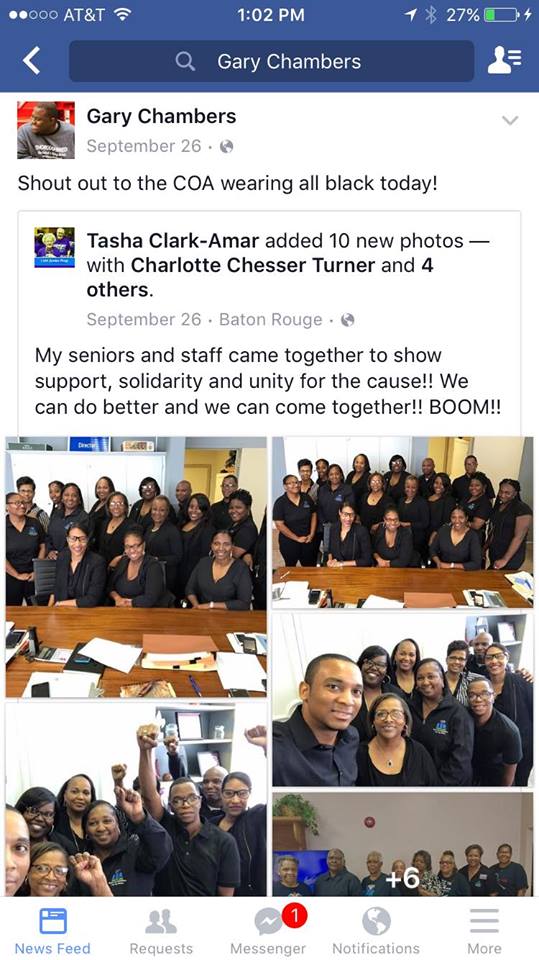 You don’t see a whole lot of diversity on the Baton Rouge Council on Aging staff, do you? That’s a bit peculiar in a parish whose population is nearly 50-50 between black and white people.

Let’s check in with another of Baton Rouge’s leading lights when it comes to race relations. In an article about several local pols who are now calling for Clark Amar’s resignation (Metro Councilmen Buddy Amoroso and Dwight Hudson, and state senator and 2016 mayor-president candidate Bodi White, specifically), we have this…

But COA board member and state Rep. C. Denise Marcelle says Amoroso and Hudson have no legal standing to demand Clark-Amar’s resignation. What’s more, she says her friend and colleague hasn’t done anything wrong.

“It is something she did for one of the seniors, and she just happens to be the director of the Council on Aging,” Marcelle says. “Her intent was just to help the lady. Once the hearing is held (next week in court) and some things come out there are going to be a lot of people who need to apologize to her.”

Marcelle believes the woman’s family is trying to block Clark-Amar’s involvement in settling the estate because they don’t like the contents of the will. As to the questions about conflict of interest, Marcelle says the Council on Aging is one of several community organizations that regularly helps seniors access the free legal services at Southern University’s law clinics.

“The COA brings people to the law clinic, and the churches do, too,” Marcelle says. “We’ve been pushing that message and trying to educate our seniors that they need to write wills and sign powers of attorney documents … so we started this process to help seniors, not steal from them.”

The concept of “conflict of interest” is as foreign to Denise Marcelle as chocolate cheese or a football bat. No, writing yourself into someone’s will to the tune of half the estate while you’re in charge of a semi-public agency tasked with providing free services for seniors is not “helping the lady.”

A trivia question for the truly plugged-in folks in Baton Rouge: who’s Denise Marcelle’s political mentor? Anyone? If you said Judge Janice Clark of the 19th Judicial District Court in Baton Rouge, who happens to be Tasha Clark Amar’s mother, you win the prize. Check with Denise and she’ll hook you up with one of those Bloody Alton Sterling t-shirts she has.

We can tie these things together, as it happens. Last year, while the Baton Rouge Metro Council was executing one of the most gutless, gormless moves in its history by giving a wide margin to the proposal putting an $8 million tax increase on the ballot to triple the COA’s budget, it came out that Clark Amar’s outfit couldn’t even turn a profit on bingo as a fundraiser.

Nobody loses money on bingo. Clark Amar does, though. She’s the only bingo operator in the galaxy who can’t turn a profit, at least on the books (bingo’s a cash enterprise, after all, and they surely have paper bags in the COA’s budget). We think we have a decent idea why. From 2013…

A dispute over a bingo game at a Baton Rouge senior center has led state officials to suggest the East Baton Rouge Council on Aging should implement sensitivity training for its staff.

The Advocate reports the controversy stems from an incident May 2 in which four women complained about being denied an opportunity to play bingo at Dumas House Senior Center, as they had done every Thursday for more than a year.

They say they were told they could not play because they had not attended programs at least three times that week.

The complaint, submitted by the daughter-in-law of one of the women, charged the four were subjected to public humiliation.

“It was just a misunderstanding, and their feelings were hurt,” Ryder said.

In a response letter from the Office of Elderly Affairs, program monitor Linda Ward advised officials with the Council on Aging that there was no evidence of “intent to publicly humiliate, discriminate, single out, or interject mental anguish on the group of ladies involved.”

Nevertheless, the Office of Elderly Affairs recommended the COA develop diversity training to integrate skills of working with different cultures.

“The thing is at Dumas House, there’s a residence there,” she said.

Clark-Amar said it is the only senior center managed by the COA that has a residence. She said 64 seniors live there.

Many of the residents are low-income, she said, and there have occasionally been conflicts when more affluent seniors attend programs at Dumas House.

“This socio-economic divide at times causes hurt feelings among the seniors and conflicts arise,” Clark-Amar said.

So rich white old ladies who want to play COA bingo get the Do You Mind If We Dance With Your Dates? treatment, and the word gets out, and in no time flat the COA’s bingo hall is empty while there are no unoccupied slot machines at L’Auberge. And to bail out this combination of racial malice, head-splitting incompetence and all-around failure the politicians and voters in Baton Rouge opted to steal a lot more than stray singles from the bingo strongbox – we got an $8 million hose-pipe jammed down into our pockets.

Should you object to these practices at your expense, along will come the rotund social justice warrior Gary Chambers and his merry band of hustling minstrels to brand you a bigot.

And why? Why are these people so insistent on defending the indefensible? Because the Baton Rouge Council on Aging is a publicly-funded Democrat Party political machine. It feeds poor – and not-so-poor, as it turns out, because the old lady Clark-Amar took for $120,000 and change was hardly broke – senior citizens, and then it mobilizes them to vote for the candidates who cough up donations to the Council on Aging PAC Clark-Amar controls. That’s why no matter what sort of scumbaggery Tasha Clark Amar engages in, she is to be preserved.

Here’s what should happen. While Amoroso, Hudson and White are correct that Clark Amar ought to step down, that isn’t going to happen without a push. But the Council on Aging tax hasn’t been levied yet, because COA didn’t get taxing power from that ballot initiative. The taxing power it rests on lies with the Metro Council – and it takes a vote of the Metro Council to levy the tax. Therefore, the Metro Council needs to set the actual millage for COA at zero, or some small amount that merely maintains COA’s budget at pre-tax levels, until “further notice” – which everyone will understand means until Tasha Clark Amar is removed from her job and someone else who isn’t an abject slimeball replaces her.

Do that, and watch the people on the Metro Council plugged into that machine – like Donna Collins-Lewis and Chauna Banks-Daniel, explode. You’ll find out exactly how much those folks actually care about services for seniors as opposed to preserving their political allies.