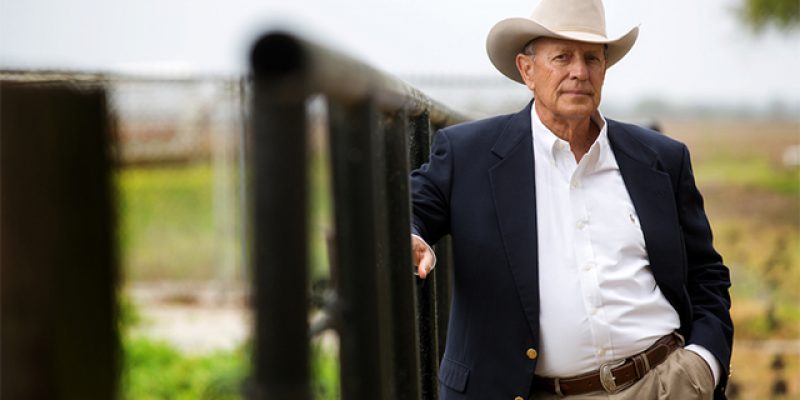 His name is Warren Harang, and he’s a Democrat – though perhaps a decidedly conservative one. The press release announcing the campaign…

“My campaign will be focused on protecting our jobs, reinvesting in our roads and bridges, and preserving our traditional Louisiana values,” Harang said. “I’m not a career politician, I’m a farmer. I know how to balance a budget and how to make difficult decisions. That’s the kind of common-sense that’s needed in Baton Rouge right now.”

Harang began managing his family’s sugarcane farm in 1973 when it was on the brink of bankruptcy. He was tasked with balancing the budget, making difficult cuts and getting the farm back on a path toward growth and prosperity. That’s exactly the kind of leadership and experience that Warren will bring to Baton Rouge. Today, more than 40 years later, the farm continues to thrive and is managed by his son, Lee Harang.

“As senator, I won’t be beholden to any special interests and I’ll only fight for the people’s interests,” Harang said. “I believe the answer to many of our state’s problems lie with reducing the size of government and making government work harder and smarter.”

“With Election Day just around the corner, we are equipped with the resources necessary to run an aggressive and competitive campaign. We intend to win.”

Harang seems a bit old-school, as in he’s a John Breaux Democrat. Given the electorate in Senate District 2, which is heavily Democratic and 57 percent black, he’s probably the conservative favorite and, depending on who else gets into the race, likely the recipient of endorsements from the LABI’s, LOGA’s, ABC’s and Louisiana Homebuilders’ Associations of the world.

It’s not clear who else will be getting into the race, though the rumors indicate it will be a very crowded field and a whole host of black candidates will enter the race. Which is something that the former holder of the seat, the resigned-before-he-was-expelled ex-senator Troy Brown, was caterwauling about on social media last week… 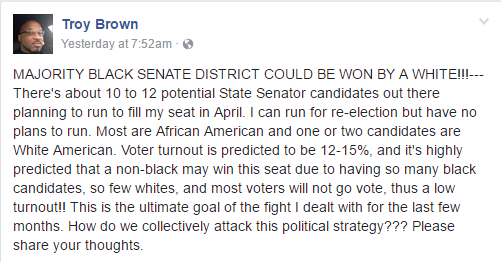 Now that Harang has gotten into the race, Brown could well be out beating the drum against him as the manifestation of the evil designs of Sens. Dan Claitor and Sharon Hewitt, who brought the expulsion resolution against him in last month’s special session.

Except that Brown would still be in the Senate had he not pled nolo contendre to charges that he thrashed his mistress in a New Orleans hotel elevator and later, bit his wife during a domestic fracas. Not sure how he can blame Warren Harang for that.

The special election for the District 2 seat is set for April 29.