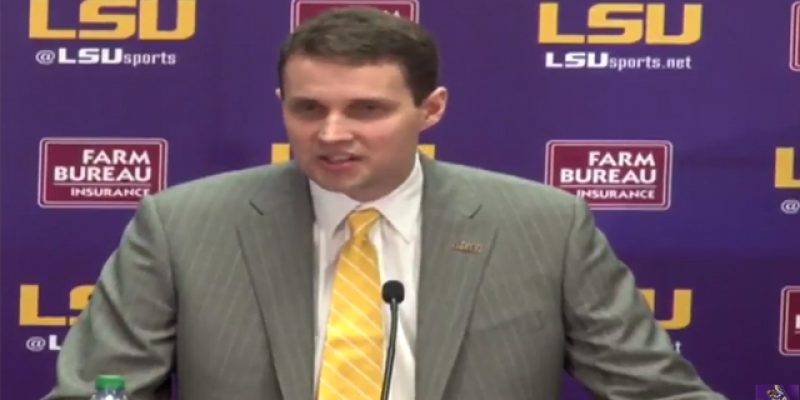 In case you haven’t had a chance to see the first press conference everybody’s talking about today, here it is. Highlights and analysis below…

Second, there have been a number of reactions along the lines that this guy is somewhat reminiscent of a young Nick Saban. He’s a lot sunnier personality than Saban is, and he has a good deal more outward enthusiasm than Saban, who tends more to the laconic, but there are elements that overlap. Wade said he had looked at LSU as a sleeping giant in basketball for some time, for one thing – that’s not dissimilar to Saban, who had a similar opinion when he took the LSU football job in December of 1999. Wade didn’t go on about how the players need to “focus on the process” the way Saban did, but he said the same things in slightly different ways when he talked about how his players would do things the right way in everything they do. The attention to detail is very similar; that’s a Saban trademark. So is the obsession with the intricacies of the game the two coaches respectively share – Wade is as much a basketball geek as Saban is a football geek.

We’ve said for a long time that what LSU basketball has needed all along was a Saban; well, not only do you have one in the sense that Wade might have that long-term program-building effect on the program but his approach could be astonishingly similar.

Also, Wade said his coaching staff would reflect Louisiana roots. We take that to mean Randy Livingston will stick around as the third assistant, and that should more or less cover this base. There are rumors Wade is hiring St. John’s assistant and ace recruiter Matt Adbelmassih as his lead assistant, and that his #2 assistant might be former Arizona State assistant Brian Merritt, who has spent five of the last six years running the John Lucas basketball camp empire in Houston. Neither of those are Louisiana coaches, but they’re big-time recruiters. Wade similarly said his roster would have a heavy Louisiana focus, because to fit the style of play he wants he thinks the local talent is very suitable.

What this means is he plays up-tempo pressure defense and he wants to run a great deal of transition basketball – typically that means a lot of super-athletic guards and forwards who are usually quicker and more skilled rather than carrying around a lot of size. You can find kids taller than 6-7 once in a while in Louisiana, but typically you’re going to find a lot more SEC-quality players at or below that height. Wade’s VCU team only had one player above 6-7 in the regular playing rotation, and the two starting post players were right at 6-7. Lots of full-court pressure and a very up-tempo style can run a team full of 7-footers ragged, and that’s what Wade wants to do. But we would bet he’s still going to go out across the country looking for whatever he can’t get in-state, and that likely means out of state recruiting for a few tall guys in the post.

Wade also noted that Houston is only four hours away and insinuated that capturing a large share of that city’s top talent is a priority. Which would certainly mitigate toward Merritt getting a spot on this staff since the latter would likely be as well-connected there as anyone. The Houston area is currently represented by six of 247 Sports’ Top 150 recruits, most of whom signed with Texas or Texas A&M this year. Breaking in for one or two recruits per year in Houston could make a colossal difference in LSU’s fortunes; the Tigers have recruited the Dallas area with some success (Jordan Mickey and Anthony Randolph were Dallas products, for example), but the last Houston-area high school recruit of note was Tack Minor more than a decade ago.

Mostly, though, it’s the passion and excitement surrounding this new coach which came through loud and clear today.