Attempts to shine light on Mitch Landrieu’s shadow government have been shut down.  Reminiscent of the government in the George Orwell novel 1984, Landrieu is running the city as if it is his own personal entity. The more Landrieu reveals, the less transparent it is.

The Advocate had their public records request rejected by the Landrieu administration.  The dictator is hiding removal info using the non-profit Foundation For Louisiana.  In response to a records request submitted following the removal of Liberty Place, Landrieu sent the newspaper a Cooperative Endeavor Agreement showing that the non-profit is paying the contractors and overseeing the removal process. Foundation For Louisiana (FFL) as a non-profit does not have to comply with public records laws or public bid laws. Landrieu Government circumvents the public.

The private donations raise suspicion. Although Mitch claims to have “$600,000 and some change,” the Cooperative Endeavor Agreement certainly sounds like he does NOT have that money.  For example, the agreement says FFL will be establishing and administering a “private donation fund” to pay for the monuments’ removal and to “directly pay from the donation fund all costs associated with the removal.” The group will “administer, collect and pay contractor and/or equipment invoices for the satisfactory performance of work,” the agreement says.

As I noted earlier this year, Mitch granted the FFL $250,000 from the Edward Wisner Foundation, a figure two and a half times larger than the next donations, $100,000 that went to the Police & Justice Foundation and New Orleans Museum of Art, explaining in his own actions that he thinks the monuments are two and a half times more important than police and art.

Mitch denies it, but with the lack of transparency and no proof otherwise, it should be presumed that the $250,000 to the Foundation For Louisiana will go to tear down historic monuments. Even if that $250,000 does not go directly to the removals, it could fill a hole where technically the FFL could shift other funds and then they could say “It was not used to removal monuments.” That goes back to the complete lack of transparency.

Will the Foundation For Louisiana may have more extensive plans for New Orleans. The executor of FFL is Flozell Daniels. When Liberty Place was removed, the activist group Take Em Down tweeted: “1 down! Approx. 138 to go!” None other than Flozell Daniels liked the tweet. The financial arm of monument removal supports tearing down another 138 targets. 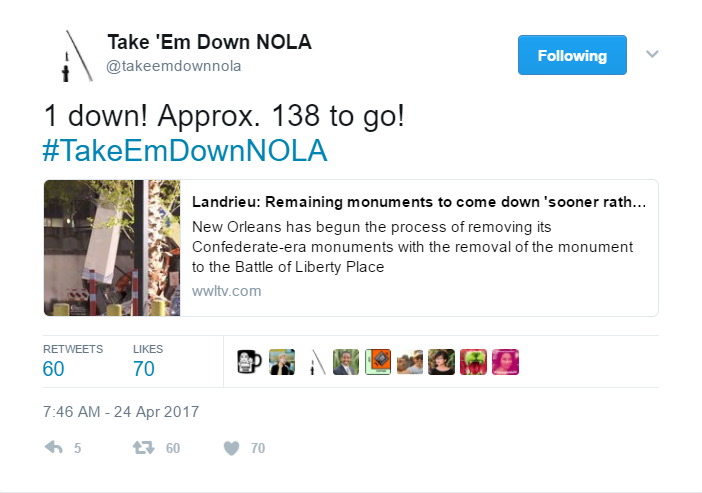 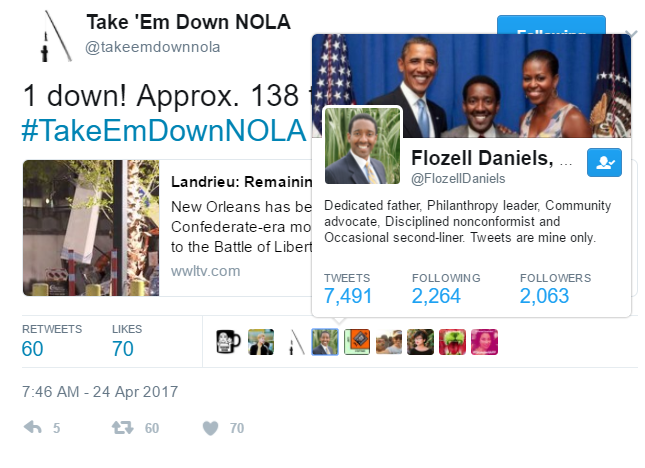 Mitch has planned this poorly. It seems most of it is made up as he goes along, and some chinks in his armor reveal themselves and he will need to make some tweaks to keep his plan secret. For instance, the Foundation for Louisiana will not “compensate city employees who provide services related to the project while in the course and scope of their employment.” This should prove interesting as the media should be seeking payroll records. And if the NOFD was on site in a Homeland Security capacity, that does not explain why their identities were hidden and they donned bullet proof vests. The records from their time sheets should be available since FFL won’t foot that bill. But the city did not provide the Advocate with information of costs for city employees who worked the removal.

Look at who the Mayor is aligned with and what is happening in New Orleans. Mitch is working from the playbook of extreme destroyers in Take Em Down, he actually took their suggestion about using city employees, although no indication has been given that he followed Malcolm Suber’s recommendation of hiring a structural engineer. Mitch is using a non-profit that he funneled grant money to, and the non-profit is operating outside of the public’s view. Mitch opened Pandora’s Box for an historic reckoning of New Orleans, the FFL founder and president Flozell Daniels supports the cultural genocide perpetuated by the anti-monument crowd. Mitch has reassigned city employees to night time activities outside of their civil service duties. Mitch used snipers and K9’s to intimidate those who oppose his actions. Mitch shies away from the public and he does not like the scrutiny from local media. The Mayor of New Orleans has priorities aligned with an anarchist group as he executes his fascist plot in secrecy.

With all this, New Orleans sounds like one of those third-world fledgling countries, wrapped up in controversy, hostile politics, armed suppression, and feuding factions, where the government limps along and will collapse at any moment. It’s Landrieu Government and it’s none of your business.