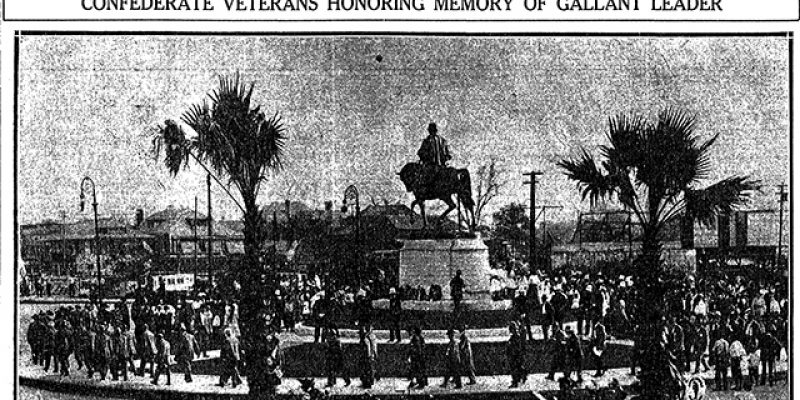 The primary argument offered by the anti-monument coalition in New Orleans is fundamentally flawed. The foundation of their case has been the association of the artwork with the label of “white supremacy.” No reasonable person in this day supports racial supremacy. When the anti-monument campaign connects the historic monuments to racism, they do so in a very deliberate way, aiming to scare off the opposition by stereotyping them as “bigots,” “racists,” or “white supremacists.” But when this anti-history crusade broke out in 2015, Americans showed they were tired of the politically correct bullying and held their ground.

The white supremacist claims remain unchallenged. Preservationists have argued the men’s merits, but no one has truly pressed Mitch Landrieu, Hayne Rainey, Tyronne Walker, Quess Moore, or Malcolm Suber to provide proof that the monuments were erected to further white supremacy. The anti-monument people mentioned have all made outrageous, false claims and passed them off as factual.

Even Walter Isaacson fabricated a quote from the dedication of the Lee monument. He wrote in the Advocate that the monument was erected to honor, “in the words proclaimed at the dedication, the ‘chivalric chieftain of the Lost Cause’.” Judge Charles Fenner presided over the Lee dedication, the entire speech was printed in the Daily Picayune.  It never mentions those words.

Isaacson, Landrieu, and Wynton Marsalis all fabricated and rewrote history to lobby anti-monument support. Marsalis wrote that “even more absurdly, [Lee] never even set foot in Louisiana.”  Isaacson, who has published biographies on Benjamin Franklin and Albert Einstein, clearly did not research before he wrote, “Lee had no direct connection to New Orleans. As far as I can tell, he never even visited the city.” Biographies on Robert E. Lee document him in New Orleans on several occasions.  In fact, after the Mexican War he was stationed at Jackson Barracks in New Orleans. The most absurd part is that Mitch Landrieu goes around repeating these lies.  He even told HBO Vice News that the monuments were a “perversion of history” before he hammered the false point that “Lee never even stepped foot in New Orleans.” The news team did their homework and didn’t let the Lyin’ Landrieu’s dishonesty go on air.

The arrogance of New Orleans’ elected officials is only topped by their true ignorance as evidenced in these quotes:

“We should remember history and not revere a false version of it,” Lyin’ Landrieu ironically talking about false history.

“These statues were not erected to honor these men in these prominent spaces because these men were honorable,” Council Member Susan Guidry said, who hid her position from the public and media until the Council vote, a move.

Since Landrieu and his band of revisionists want the three military veterans and one-time Confederates removed now, the allegations against them need to be addressed, accurately.

Judge Fenner provided a 15,000 word testament to General Lee at the dedication. General Bennett H. Young hailed the life and long career of Jefferson Davis. Both of these were published afterwards. Judge John St. Paul spoke at length at the Beauregard dedication, copying a speech he delivered which had been previously published.

The speeches never promoted white supremacy. In fact, none of them mentioned whites, blacks, slaves, or slavery. To repeatedly label these three accomplished men’s statues as “monuments to white supremacy” is the true perversion of history.

“It would not alone perpetuate the memory of the illustrious dead,” Major B.F. Jones spoke. “But to its base the women of the South would take their children and teach them the history of their country and the story of their fathers who fought and died for the cause he so gloriously sustained.”

Reverend Dr. Palmer “spoke of the practice of erecting monuments to the memory of universally beloved dead as ancient as almost history itself. That great men should not be permitted to die, was one of the earliest passions of mankind. He called to mind the multitude of ancient monuments in ancient Greece, and the veneration there entertained for great men.”

During a rededication in 1954, Mayor Chep Morrison said the Lee monument “exemplified local interest in the rich, cultural traditions of the past we’ve retained in New Orleans. [In the] quest for a better standard of living, citizens should hold the city’s landmarks, statues, and traditions sacred, precious, and dear.”

For the Jefferson Davis Monument unveiling in 1911, the School Board called for a half day holiday for public schools so students could attend the educational event. The dedication was held on George Washington’s birthday and featured a military parade and 21 gun salute, and involved school children and civic organizations

“We gain nothing in this hour by contentions about who was right and who was wrong.  The people of the Confederacy believed that they were right enough to stake their fortunes and liberties and lives on the result, and with full confidence in the justice of their cause, equaled only by their courage appealed to the final arbiter in human affairs—the sword; and on this appeal they lost. … Jefferson Davis’ name, courage, loyalty, patience and nobility of mind and soul are enshrined in every Southern heart.”

When the Beauregard Monument Association was founded in 1893, comments made by the Executive Committee members published in the Daily Item. They spoke of the esteem he was held by his countrymen, called him “Louisiana’s illustrious and valiant soldier and patriot” among many other glowing praises of Beauregard’s character.

“It is eminently wise and proper that the memory of this illustrious soldier, this patriotic and devoted son of Louisiana, this stainless gentleman whose courage was as conspicuous in the peaceful walks of life as in the stirring time of war, should be perpetuated in everlasting stone,” Albert Baldwin said.

The Daily Picayune called building a monument to Beauregard “most worthy undertakings in the city” in 1893. Then wrote in 1899, “The Picayune this morning prints a communication urging that steps be taken to build a monument to General Beauregard, Louisiana’s distinguished soldier. It is a debt which Louisiana owes to erect a worthy monument to this greatest military engineer of any age and eminent commander, and it is a debt which cannot, with any sort of confidence, be left to future generations to pay.”

Judge St. Paul said of the native veteran, “Our own Beauregard, son of our beloved Louisiana—proudest of all proud names that fill the glorious page of her history. … For there was about Beauregard an element of chivalry, a touch of the romantic, that endeared him above others to the people of the South and made him their popular hero.”

These statues and pedestals are complex in their design, and their subjects. These immaculate sculptures were erected to commemorate brave, honorable, and valiant leaders, well respected in their time, who waged a war for Southern independence and lost and lived the aftermath of their decisions.

A few chapters of the history books have passed and now the people who push for their removal, City Council or Mayoral Administration, have clearly not read a book on them. The revisionists are making up the story as they go, retelling it in a hateful and narrow minded, intolerant monologue. They more closely resemble the monsters they have falsely morphed these men into.

When you understand the lies, the next step is to see the smoke and mirrors. The intent or motivation for commissioning and erecting these monuments was based on people memorializing leaders. But, a further analysis reveals the magic trick, a public relations misdirection campaign that masterfully diverts attention away from reality. Landrieu leveled the 1993 Nuisance Ordinance against the four historic monuments. The City Council voted on this allegation. The Nuisance Ordinance does not mention the intent or motivation of a monument. Those are not qualifications for removal. Yet, the Mayor fabricates lies to shift the focus.

Question anything the Mayor says. Lying Landrieu and his revisionists are the perversion of history, they certainly are not a recitation of history.