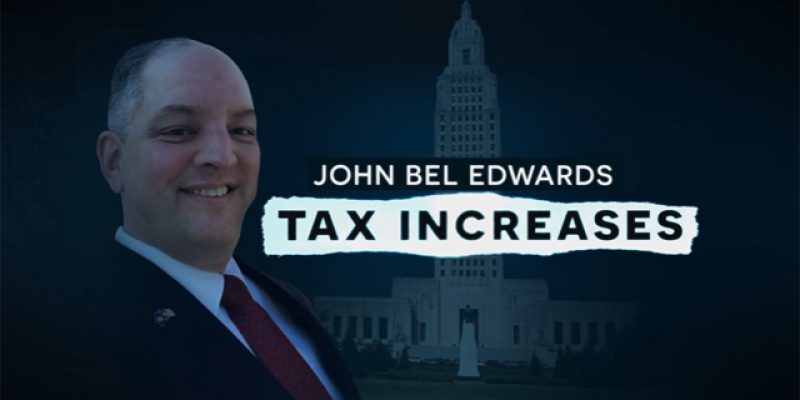 This comes from an outfit called Truth In Politics, whose website can be found here. It’s headed by Kelli Bottger, a veteran conservative political strategist who came over from having done a lot of heavy lifting at the pro-school choice Louisiana Federation for Children.

It isn’t like Edwards can complain too loudly. Everything in the ad is correct – Louisiana does have the highest sales taxes in the country, and the ad’s indictment that he’s raised taxes on all those needful things is correct. He did. That was the point of Edwards’ demand to “broaden the base” of sales tax revenue by removing exemptions.

It’s also correct that the gross receipts tax has been called all those things, which is why states which have tried such a tax, like Texas for example, are moving away from it.

This ad, which was produced by Innovative Advertising out of Covington – Jay Connaughton, who along with his partner Gordon Reese is a principal at Innovative, played a key role within the Trump campaign last year and as Connaughton told us on The Red Bayou Show a few weeks back much of that role was polling and listening to the American people to get a good handle on why folks are so dissatisfied with establishment politicians – is so effective thanks to its blunt approach to Edwards’ fiscal management.

It doesn’t call him names, it doesn’t throw out any labels, it just tells the truth: this guy is desperate to take as much of your money as he can get his hands on.

Which can’t be argued. It’s the truth. Nobody has spent more time trying to find ways to tax people in Louisiana than John Bel Edwards has.

This spot only focuses on the gross receipts tax and not Edwards’ proposal to double the state’s gas tax. As it happens, Americans For Prosperity’s Louisiana chapter is working on that one, having put out a spot on it last month and coming back Monday with a press release demanding the legislature, which it says has already raised some $2.4 billion in taxes the last two years, stop spending money…

“It’s time for the tax-and-spend song and dance to end. The governor’s tax hike plans are a bad deal for consumers, citizens, and businesses. Whether it’s a gas tax or a gross receipts tax, the state’s economy simply cannot handle another tax increase.”

“The legislature should lead in this session by cutting the size of state government and rejecting attempts to patch budget holes on the backs of hardworking Louisianans and business owners.”

Will Edwards be able to pass any of the taxes he wants? We doubt that, but what we’re pretty comfortable saying is whether he’s successful or not, he’s going to have some well-heeled, accomplished political pros exacting a very heavy toll on him for the attempt. When this session is over this governor will be bloodied if not knocked out.

And he can’t complain. After all, John Bel Edwards promised during the 2015 campaign that he wouldn’t raise taxes, and that was a lie.