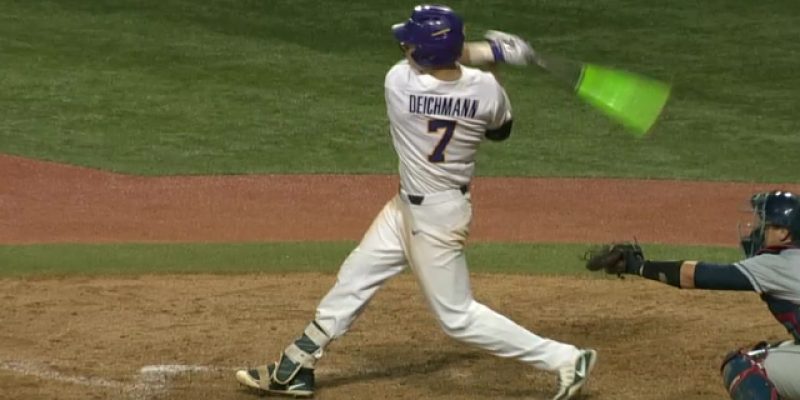 Not much comment needed on this bad boy. If you didn’t see it last night, or even if you did, enjoy…

LSU ended up winnin’ a 15-2 laugher over Ole Miss last night, which was a real nice surprise for lotsa fans who’ve spent the whole season to date wonderin’ how come they’ve played a good bit below what they’re capable of. Like for example, Alex Lange went seven innings last night an’ more or less didn’t get touched; he looked like the first round draft pick everybody thinks he is, fa sho. Except Lange is 4-4 for the season after winnin’ that game, which is ridiculous. Two of those losses came because he got no run support at all, which is irritatin’ enough given what LSU has in the battin’ order. Two other ones, he got blowed up.

Lange isn’t supposed to get blowed up. It’s supposed to be LSU blowin’ other people up. Like they did last night. An’ they did it against an Ole Miss pitchin’ staff that came in with the best ERA in the SEC and like 6th or 8th in the country.

So the lesson is, this bidness last night is what the Tigers are capable of. They’ve spent most of the first part of the year piddlin’ around instead. They’ve been throwin’ firecrackers around when they had a MOAB like last night in the bag.

Hopefully they got some more in there this weekend. Go to hell, Ole Miss.

Interested in more national news? We've got you covered! See More National News
Previous Article Finally, JBE Is Getting Involved In The COA Mess In Baton Rouge
Next Article VIDEO: Cameron Henry On The State’s Budget Process In The Legislative Session’s First Week