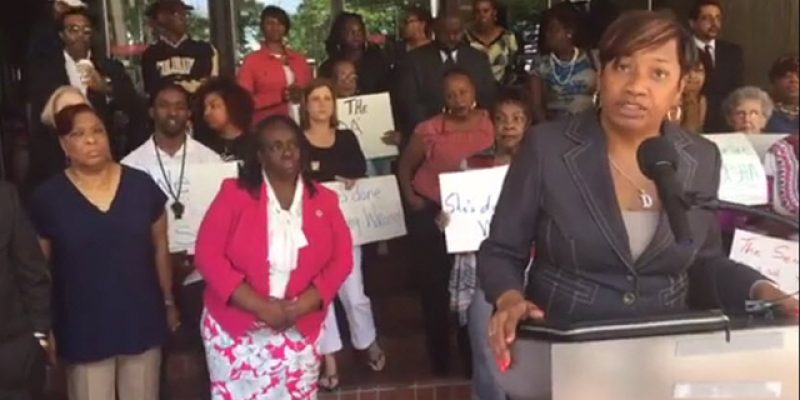 This is one of the most priceless pieces of public drama you’ll ever see. It’s a press conference at City Hall, where state representative D. Denise Marcelle, who is a political protege of Tasha Clark Amar’s mother Janice Clark and an ally of the crooked Council on Aging director, attempted this morning to put on a dog-and-pony show defending Amar and the political machine she’s building with public money.

And along comes the grandson of Helen Plummer, the 95-year old woman whose estate was essentially plundered when Amar took advantage of her and wrote herself into Plummer’s will to the tune of $500 per month for the next 20 years. And he proceeds to read a statement, drowning out Marcelle in laying out the case against Amar, which is fairly devastating. Ted Plummer did this, because the Plummer family had called a press conference for 11:00 this morning at the family home, and Marcelle called a press conference at City Hall in order to scoop them and steal the media away. So Plummer shows up and lays waste to Marcelle’s event.

Meantime, much of the North Baton Rouge political elite stands at the stage, mouths agape.

They recover later to spout all the wonderful things the Council on Aging does, but it rings hollow. Especially Marcelle’s ranting, which is illustrative – isn’t it amazing how somehow an accusation of stealing from black citizens in Baton Rouge is cast as racism? And don’t incidents like this prove how little Marcelle and her cronies actually care about the people they purport to represent? So long as you’re part of the machine it makes no difference whether you victimize black people – you wear the cloak of Race Avenger, and that makes you untouchable.