Going into this legislative session there was little question that Gov. John Bel Edwards’ gross receipts tax, or Commercial Activity Tax, was likely a goner. That turned out to be true.

Conventional wisdom held that his other big idea for the session, a sizable increase in the state’s gas tax, had a little better chance. Edwards clearly bought into the possibility of the gas tax hike’s passage; he sent Department of Transportation and Development secretary Shawn Wilson out on a charm offensive before the session to push it. Along the way were reports that companies involved in industries surrounding the road construction business were shaken down by Wilson to fund a public-relations and lobbying push in favor of the gas tax.

That PR effort appears to have failed. Last week a poll commissioned by the conservative group Truth In Politics found that public support for the gas tax measured at a woeful 22-75, with 63 percent of respondents registering strong disapproval.

It’s now conventional wisdom at the state capitol that none of Edwards’ tax bills will make it out of the House Ways & Means Committee alive.

But Americans For Prosperity’s Louisiana chapter isn’t taking any chances, and they’re moving in for the kill on the gas tax. AFP just dropped a mailer in six House districts in order to generate phone calls to six members of Ways And Means who might have been considered soft on the gas tax – Julie Stokes, chairman Neil Abramson, Clay Schexnayder, Paula Davis, Stephen Dwight and Mike Huval. All but Abramson are Republicans.

Here’s the mail piece, as addressed to Stokes’ constituents… 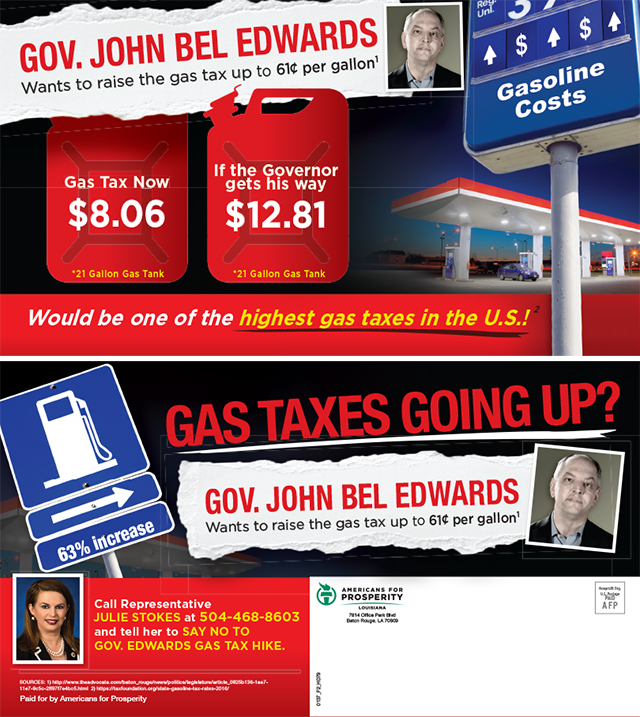 The gas tax, much like the sales tax, is talked about in terms of pennies. However, we believe that it is important for the people of Louisiana to understand exactly what a given policy would really mean to their pocketbooks. This is not pennies at the pump, this is dollars. And over the course of the year it is hundreds of dollars to a two car family.

Louisiana is in a jobs recession and raising taxes now is more than an inconvenience to families, it’s very harmful. Before ever asking the citizens of this state for another penny or dollar, the legislature must take a fine-tooth comb to the budget and cut all fat, including the annual $180 million handout to Hollywood.

They’re having a good old time with the film tax credit, but that $180 million incentive is nothing compared to the inefficiencies amid a $29 billion state budget. What we’re hearing also is Edwards has significant problems with many of the Democrats in the legislature who represent poor districts; their constituents simply can’t afford to pay more in taxes and they can’t agree to go any higher. AFP’s piece might well have been effective in some of their districts as well.

Interestingly, our friend Jeff Sadow was on Talk 107.3 FM this morning to outline how more efficient spending could free up a lot more funding for road construction than a big gas tax hike could. Here’s that link. Sadow’s position is the majority opinion in the state; as TIP’s poll shows, very few people in Louisiana trust the state’s politicians and bureaucrats to spend the state’s money wisely, and therefore no tax increase is going to be popular.

We would be very surprised if that gas tax can make it out of that committee. Our expectation is the governor’s bill will get pulled before a vote.

And when all of the taxes are dead, Edwards will embark on a media push demanding, as he’s already begun to do, that the House solve the budget problems he created through asking for a half-billion dollars more in general fund spending than the state’s Revenue Estimating Conference projects Louisiana to have. The solution is simple; namely to deny Edwards his wish list and fund only what the state currently spends on and no more until the economy generates more tax revenue.

As for the roads, Edwards’ mission is simple – show that he can administer current funds as best as they can be administered, or at least better than they currently are. Because unlike what the governor’s people told several legislators before this budding Waterloo of a legislative session began, the voters in Louisiana do not have an “appetite for more revenue.” That’s a fantasy that will not serve him well as the battle rages on at the Capitol.