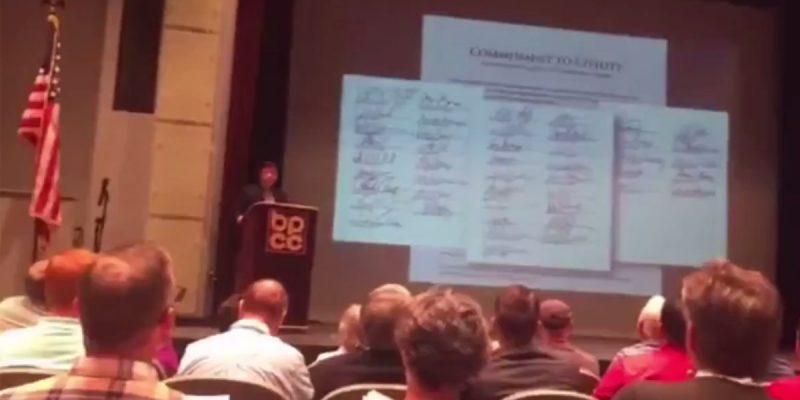 We already know that Louisiana’s congressional delegation has been the target of the paid-protester group Indivisible, as Bill Cassidy was one victim of the group and Clay Higgins was another. But yesterday, that group attempted to hit Mike Johnson at a town hall meeting, and wasn’t able to score as well.

Unlike when Indivisible repeatedly shouted Cassidy down, despite conducting heckler training over the weekend they weren’t able to unduly disrupt Johnson’s 90-minute meeting in Bossier Parish even though half of the crowd, or maybe a little less, were there to argue for Obamacare.

Johnson went on KEEL Radio this morning to talk about the spectacle, clearly with a smile on his face. He said he enjoyed himself, and that he and his people were prepared for the hecklers and the Indivisible gang having heard about the heckler training some out of state activists had come in from Texas to conduct, and set up a format for the town hall which discouraged the kind of craziness Cassidy endured (not to mention the even more violent and disruptive behavior some of the other protests have put on display)…

We also have video of the town hall itself, courtesy of the Shreveport Times. For most of it the crowd was pretty tame…

Wright reportedly followed the pair after they had left a town hall on the University of Tennessee at Martin campus.

According to the police report, Kustoff and Dunavant were afraid the unhinged woman was going to run them off the road.

When they arrived at their destination, Wright reportedly ran to Kustoff’s car — now parked in the driveway — and “screamed while banging on the car and reaching in.”

She allegedly blocked his car until police were called. Then she high-tailed it out of there.

All Johnson got was an argument or two. No wonder he’s so cheerful.