Yesterday there was a report the City of New Orleans and its mayor Mitch Landrieu were going to take a 30-day hiatus on their plans to bowdlerize the city’s landmarks after it became apparent the city doesn’t actually own the P.G.T. Beauregard monument which is next in its sights.

That didn’t last long, though – unless a state appeals court says otherwise, Landrieu will get that Beauregard monument post haste.

The fight over the P.G.T. Beauregard monument is heading back to court Tuesday.

This time supporters hope a higher court will block the city’s removal process.

Attorneys for the monumental task committee say they’re heading to the Fourth Circuit Court of Appeal Tuesday in a last-ditch effort to keep the monument in place in front of the entrance to City Park.

The Monumental Task Committee contends that if City Park owns the land, then the nuisance ordinance that targeted the Beauregard monument would not be valid because the monument would then not be on city property.

The city says it remains intent on removing the monument soon.

Citing a letter, from the city attorney confirms the group responsible for City Park understands the city has the authority to remove the statue.

Something else interesting from that Fox 8 report…

“It sounds like City Park and the city have agreed to have a 30-day break to decide who really owns certain properties that may be underneath the monument,” Raspanti said. “But the city says ‘well were still going to go forward and take the monument down’ and the monument committee is saying ‘oh no you’re not we want a temporary restraining order’ for 15 or 30 days I would assume to stop this.”

With the threat of legal action in place, however faint it might be that a judge might actually stand in Mitch Landrieu’s way, it looks like the city is hustling in a way it sure doesn’t for economic development or crime-fighting, or for filling potholes.

Scenes from the vicinity of the Beauregard monument today… 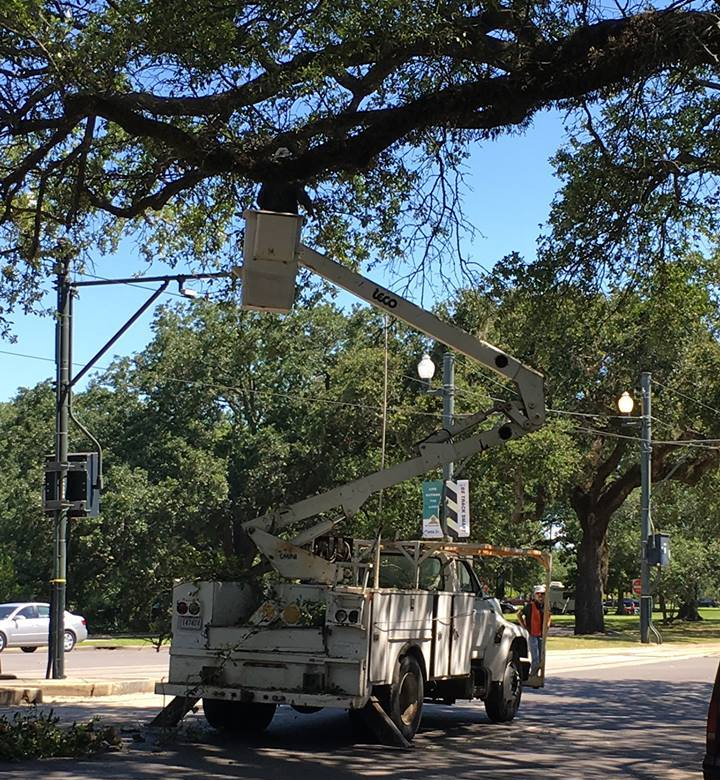 That’s on Carrollton Boulevard today, where trees are being trimmed to make way for a crane. They’re bringing in lights. From the NOPD. Remember how no city funds would be used for the monument removals? There are your barricades.

The rumor mill is now saying the Beauregard monument is getting a visit from Mitch’s masked men tonight. That doesn’t seem unlikely – unless the appeals court grants an injunction, the general might well be gone when the sun comes up tomorrow.