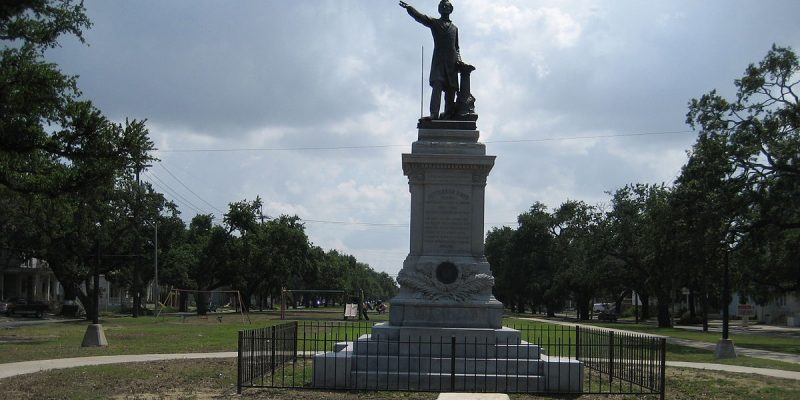 The monument to the Confederacy’s only president was taken down in bubble wrapped ignominy, making the statue the second memorial – this one to Jeff Davis – yanked up as part of Mayor Mitch Landrieu’s war against the city’s Civil War era monuments.

The national and local media have largely applauded their removal, with Advocate (nee Times Picayune) political columnist Stephanie Grace calling the monument a work of propaganda.

As Miz Grace hails from Massachusetts and is a product of Columbia University’s journalism school (located on the upper west side of Manhattan), one can expect the professional opiner to have a less-than-charitable view towards Davis and his statute.

But to the natives of New Orleans who, from their perspective, had to struggle with invasion, military occupation, and living under a corrupt, illegitimate, and undemocratically empowered carpetbagger regime, Davis was indeed a hero to many and the monument reflected the values and mindset of that particular generation of New Orleanians.

Monuments memorialize both the honoree and those bestowing the honor.  They are visible and artistic milestones of a past society.  They are witnesses to the time.

Nobody mandated that school children toss bouquets at their base, only that they be allowed to exist.

Of course much of this hatred towards all things Confederate is a new trend, manufactured by the media and leftist political activists seeking to exploit tragedy in South Carolina to shamelessly advance an agenda to bulldoze American heritage and replace reverence towards our Founding Fathers with the elevation of “new” progressive heroes.

And just to clarify, Jefferson Davis is not a Founding Father, but the elimination of his memorials are an early mile marker towards a more radical destination that is not too far on the horizon (see Take Em Down Nola’s hit list).

Back in 1995 the United States Postal Service didn’t think Davis was too much of a villain, issuing a 32 cent stamp bearing his likeness as part of a Civil War commemorative series. And of course the USPS is part of the federal government.

So what do locals think of knocking down century-old monuments?

One New Orleans poll showed most were against it while a later survey reflected a slight majority in favor.

Communities shouldn’t take down historic edifices based off the opinions of out-of-town liberal media voices and 50% of respondents in a survey in a very liberal city.

Considering that only 15℅ of Orleans Parish voters backed Donald Trump for president last November, it would seem there is remarkable crossover support for the monuments from Hillary Clinton voters and even notable backing from black residents.

While the mayor has caterwauled that his crusade isn’t about politics while shilling the monument take-down for donations to his NOLA PAC, many folks who vote on his side of the political spectrum don’t agree with the mayor.

The very voters who backed him and his sisters’ candidacies are denying him the consensus he lamented lacking during the fiasco bull session he had with the TP.

And as the media is inclined to assign unflattering and outright slanderous motives to those who are not with them, I’ll add some personal perspective on the Jefferson Davis statute.

First, I never saw the Jefferson Davis memorial as a relic of white supremacy. Ever. It never crossed my mind as such and my lineage is ethnically diverse.

Secondly, I never saw it as a monument to treason. Last I checked Davis didn’t scheme with Queen Victoria to return the southern portion of the US under British rule.  The way people 150+ years ago viewed the Union was very different than today.  Furthermore, where were all these gulf coast lefties condemning the west coast lefties talking about secession after Trump won?

Thirdly though my ancestors didn’t fight for the south during the Civil War I don’t begrudge those who honor their forefathers who served in the Confederate army to defend their region, state and home. For descendants of CSA soldiers and sailors, the Davis statue was a link to their ancestors.

Fourthly, the Davis statue was artistically attractive.  Had a near identical statue been produced of Daniel Webster, it would be hailed as gem instead of the politically motivated “nuisance” label that has been disingenuously applied to it.

New Orleans philanthropist and one-time friend of the mayor Frank Stewart was absolutely right when he referred to the monuments as works of art.  When visiting the Davis statue as its days seemed numbered, I always left impressed with the detailed etchings of its base and the craftsmanship that went into creating a bronze figure delivering an oration.

Finally, I saw an important piece of New Orleans’ past.  Being a Mississippian, Davis had a close connection to south Louisiana, which is where he would spend his last days.

Davis died in uptown New Orleans in a local judge’s mansion on First Street.  The Confederate president laid in state at Gallier Hall (a fact that amazingly enough is still listed on a New Orleans city government website). The Crescent City gave Davis a tremendous sendoff, as his funeral procession rumbled through New Orleans’s streets past thousands lined up along the route to pay their last respects.  And for a few years, Davis was buried in Metairie Cemetery (his name is still on the vault cover).

The Davis-New Orleans connection would also have a Mardi Gras tie-in.  Davis’s daughter Winnie reigned as Queen of Comus three years after his death.

A reasonable person could dislike Davis and every aspect of the Confederacy and still oppose robbing a past generation of their historic remnant and future generations of an impressive work of public art and a century old landmark.