HB 71, authored by Rep. Thomas Carmody, is probably the highest-profile bill in the Louisiana legislature in this session, and its floor vote this afternoon in the Louisiana House came after more than two hours of “spirited” debate about monument preservation.

The vast majority of which was taken up by fancy speechifying from the Democrats in the chamber who figured they’d have an opportunity to lecture the majority of the House members who were for the bill, and the 65-70 percent of the public in Louisiana who in poll after poll say they want those monuments to Civil War figures and others not currently favored by the Social Justice Warrior crowd preserved, on morality and justice.

It was a drawn-out dramatic mess, complete with less-than-impressive arguments like Rep. Katrina Jackson asserting that Robert E. Lee and P.G.T. Beauregard, among others, had as their primary function the shedding of innocent blood. And Rep. Marcus Hunter arguing nobody’s quality of life in New Orleans would be affected by the removal of two of its most prominent examples of public artwork. And Rep. Ted James accusing Lee and Beauregard of rape, because they fought for a Confederate States of America in which there were some plantation owners and other slaveholders who engaged in sexual congress with their slaves. If those don’t sound to you like the most convincing arguments against preserving landmarks more than a century old, you begin to recognize the difficulty for some of us who sat through the debate.

At the end, though, the House fell along similar lines to the public. The vote on the bill was 65-31 in favor, indicating that monument preservation among House members is as appreciated as it is among their constituents.

For those wishing to save the monuments to Lee and Beauregard in New Orleans, and prevent any further bowdlerization of Louisiana’s history by legacy-seekers and other political animals such as Mitch Landrieu, today’s vote was unquestionably a victory.

But it might be the last bit of success to come for the monument preservation crowd.

The bill next goes to the Senate, where as we’ve written before the president, John Alario, will ignore the rules and assign the bill to the Senate and Governmental Affairs committee chaired by Sen. Karen Carter Peterson, a Democrat social-justice warrior from New Orleans. The 5-4 Democrat majority on that committee will kill the bill. By the rules it should go to the Senate Education Committee, where there is a 5-2 Republican majority and the bill would doubtless move to the Senate floor where its passage would be all but assured.

Alario is no social justice warrior, and his legislative district (Westwego and other parts of the West Bank in Jefferson Parish) would overwhelming support HB 71 if polled. But he’s also a hatchet man for Gov. John Bel Edwards, and Edwards doesn’t want the Hobson’s choice of having to sign or veto that bill – if the governor signs it, he reaps the ire of the state’s race-driven Left, and if he vetoes it, he runs afoul of two-thirds of Louisiana’s population on an emotionally-charged issue. So Alario will give the bill to Peterson to kill.

But at least today the bill survived, and the House sent a message to the bowdlerizers that the majority is not with them. 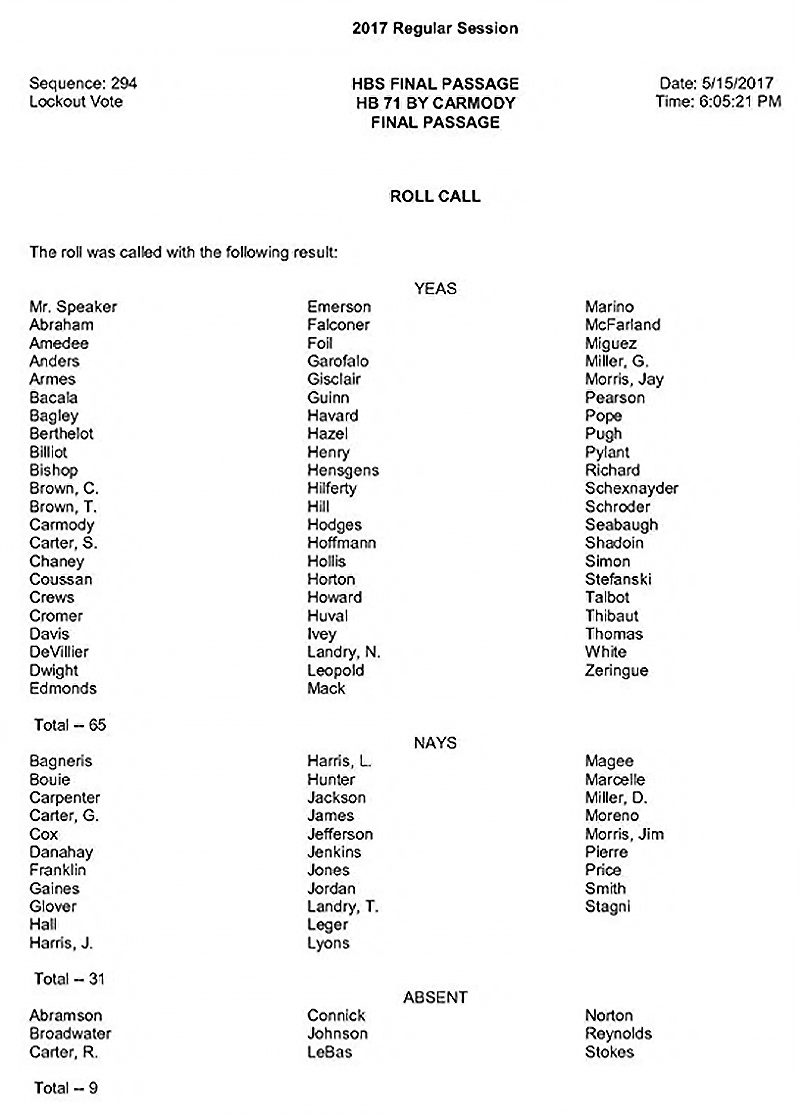