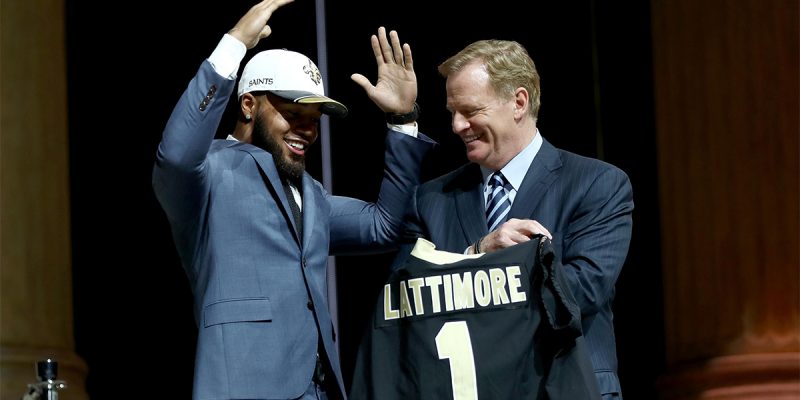 Let me preface this column by saying the following.

I hope Wisconsin offensive tackle Ryan Ramczyk proves to be the natural successor to longtime veteran Zach Strief and combines with fellow tackle Terron Armstead to form one of the best tandems in the league, thus buying quarterback Drew Brees those 2-3 extra seasons he wants.

I hope Utah safety Marcus Williams displays ballhawking skills harkening memories of a certain defensive back we can’t write about in a positive light anymore.

I hope Tennessee running back Alvin Kamara stays off the Mugshot Weekly’s frontpage.  With the Saints signing future Hall of Fame inductee Adrian Peterson and Mark Ingram coming off his most productive season in the pros, I am setting the bar low for him.

I hope Florida linebacker Alex Anzalone doesn’t retweet too much stuff from his alma mater’s football program and that he plays in at least as many games as the perpetually injured Dannell Ellerbe.  Perhaps they can alternate riding the pine.

And as for the team’s final two picks in the draft, Florida Atlantic defensive end Trey Hendrickson and Miami defensive end al-Quadin Muhammad, I hope they validate the wisdom of Saints head coach Sean Payton and general manager Mickey Loomis’s decsion to put off selecting players to fill the biggest need position on the roster until the more recognized top tier talent at defensive end had been picked from the board by the middle of the third round.

Our edge rushers were always there, we just needed to be patient, right?

This grudgingly professed optimism contrasts with the angry tweets and other social media tantrum pitching I engaged in on Thursday and Friday nighst.

Well that’s not totally true- I held out hope the embargo on drafting LSU players would have finally ended with a polite gesture pick of anyone from Death Valley with the 6th round selection.

Instead they took a crapshoot on a ne’er-do-well whose personal conduct was too bad even for The U.

The only selection I really liked was Williams.  The Saints are thin long term at safety and Williams seems like someone who will be able to contribute sooner than later.  Also by the time the 42nd overall selection, the studs at defensive end were all gone and it was either use a mid-second round pick on a top-notch safety or overpay for a second-tier lineman.

Williams was the right call.  He’s more likely to be a Michael Thomas type player than a Stanley Jean Baptiste.

That said I was stunned the Saints left the first round without a single defensive end or linebacker, particularly when there were quality players still available before the Saints used their 11th overall pick.

The Saints would have had their choice.  Instead they went with the consensus best cornerback in the draft, Lattimore, a player with a history of injuries.

Forgive my lack of enthusiasm but you always hear the words “if he stays healthy” prefacing any praise of Lattimore.

The good news is that the Saints later admitted they were exploring trading up to get him. At worst, Lattimore only cost us a 7-9 season and not wasted future picks.  That would come later.

We expected to leave the first round with a cornerback anyway so what does it matter if pick 11 was used instead of the 32nd “Malcolm Butler trade bait” pick?

Because all those acclaimed DEs and LBs mentioned were gone, and in the case of Foster, right before the Saints picked.  In fact the Saints were on the phone with Foster when the San Francisco Forty Niners beeped in to tell him they moved up in the draft to pick the linebacker.

Not the first time the Niners caused last second disappointment in the Crescent City.

Ramczyk was selected because the other teams outmaneuvered the Saints’ brain trust and the draft board said the tackle was the best player left.

A calculation and poster made that pick.

The realization that the Saints had essentially traded yet another playmaking offensive weapon for an offensive lineman (see Max Unger, Jimmy Graham swap) is disheartening.

Two offensive tackles taken in two out of the past three first rounds.  It’s as if the Saints are doubling down on Andrus Peat.

The Saints got unlucky again in the third round, after selling off next year’s second round pick and this year’s seventh round selection to land a running back and not a defensive end or linebacker.

When the Saints picked again in the third round they saw Kansas State defensive end Jordan Willis (who I thought they were trading up for in the first place) and LSU linebacker Duke Riley snagged three and one spots ahead of them, respectively.

That Riley got snatched by Atlanta is a twist of the knife.  But we deserved that after the carnival of schadenfreude the Who Dat Nation has enjoyed since the Super Bowl.

The picks weren’t bad but the timing was.

I hope I am wrong and the 2017 Saints draft class may prove to be as good as last year’s.

If they stay healthy/out of trouble.