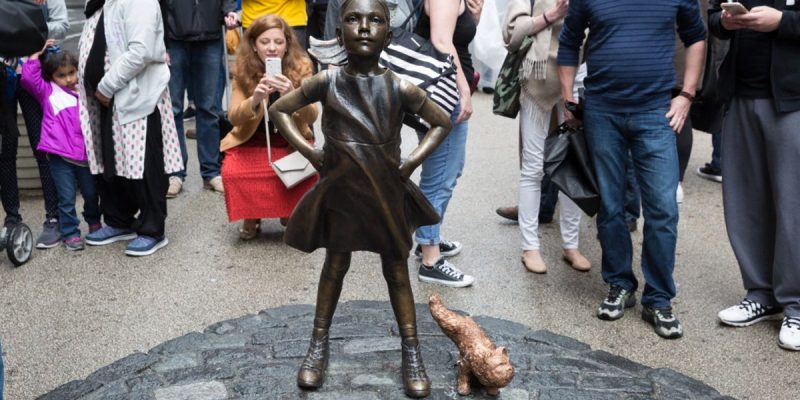 If this isn’t the most entertaining thing you’ll see today, then you really need to work on your sense of humor. There is now a “Pissing Pug” statue next to the controversial “Fearless Girl” in New York’s financial district.

City sculptor Alex Gardega — seething over the “Fearless Girl” statue being placed across from Wall Street’s “Charging Bull” — has decided to retaliate with a work of his own.

Gardega created a statue of a small dog, titled “Pissing Pug,” and his sloppily crafted pooch takes direct aim at “Fearless Girl” — or, at least, at her left leg.

“This is corporate nonsense,” Gardega told The Post of “Fearless Girl,” saying it was put opposite artist Arturo Di Modica’s famed bull as a publicity stunt by a Boston-based financial firm.

“It has nothing to do with feminism, and it is disrespect to the artist that made the bull,” he said. “That bull had integrity.”

The Upper West Side artist sniffed that he even made his dog particularly poorly just to stick it to “Fearless Girl” even more.

“I decided to build this dog and make it crappy to downgrade the statue, exactly how the girl is a downgrade on the bull,” said Gardega, who has never met the other statues’ creators.

Naturally, Gardega is getting called a “misogynist,” which is the same kind of tiresome butthurt shutuppery we’re sadly becoming used to. He’s absolutely correct, and so was Di Modica, in objecting to Fearless Girl’s placement next to the iconic Wall Street Charging Bull – Fearless Girl transforms the bull from a vibrant symbol of capitalist prosperity and masculine vigor to that of danger and menace, which is a profanity of Di Modica’s statue.

And his protest is perfect. Pissing Pug intentionally sucks as a statue, and it makes a mockery of Fearless Girl. Which is fitting.