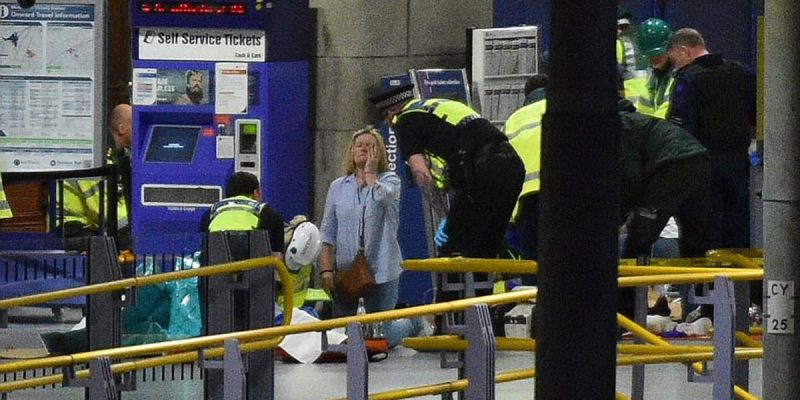 In another example of how the West is under ceaseless attack, yesterday, 22 May, Jihadists struck again in Great Britain, this time in Manchester at the famed Manchester arena.

In this latest attack, Western civilization has been exposed. We Westerners have failed to protect the most innocent and precious among us, our little girls.

Make no mistake, in Jihadi circles our inability to protect this segment of our population is being viewed with ridicule and disdain today, further emboldening a barbaric, pitiless enemy.

It can be no accident or coincidence that the Jihadis picked as a target a music concert where young teen age girls would be most prevalent.

The concert embodied much of what Sharia-compliant Islam finds abhorrent about Western culture: music, fun, frivolity, and females enjoying themselves independently in public. Wherever Sharia rules–Saudi Arabia, Taliban Afghanistan, Deobandi Pakistan, northern Nigeria, Somalia, the Islamic State, Iran and parts of regions around the globe–music is largely forbidden, women are covered and rendered to be essentially chattel.

The Jihadists chose to lash out at this event in this location on purpose. They pre-selected their victims for this act of war: teenage girls.

What does it say about our society in the West today that we seem to only be able to respond to barbaric, bloody acts of war with sadness?

It is no accident that the Jihadis targeted one of the West’s pop culture celebrations, of which our youth are so consumed. The Jihadis chose a symbol and an idol of our pop culture to target, kill and terrorize the most innocent among us.

The reaction of the Western entertainment industry tells all one needs to know about where we are as a culture and why we are so impotent in fighting back against this scourge in our midst–particularly in the all-important war of ideas.

There was singer Katy Perry lamenting on Twitter that she was “broken hearted for the state of the world.”

This isn’t about the “state of the world.” It’s about the war that is being waged upon us–not just in places like Iraq and Afghanistan, but in our own cities, our own concerts, night clubs, churches, and celebrations. It’s about Islamic jihad. We have been on the receiving end repeatedly of these barbaric attacks rooted in a savage religious doctrine.

It’s not about “hate.” It’s not about “extremism” or “radicalism.” It’s about Islamic jihad, a doctrine that goes back many centuries to the origins of sharia.

When the Nazis bombed Britain during the Blitz in 1940, was the reaction, “What is going on with the ‘state of the world’?”

For that matter, when the Japanese bombed Pearl Harbor, raped Nanking and seized Singapore, was the world’s reaction sadness over the “state of the world?”

Or was the reaction to these acts of war resolve? Was it healthy, understandable anger and a firm intention to respond to the attacks and defeat the enemy? Of course it was. Our grandparents and great grandparents didn’t respond with teddy bears, flowers and candlelight vigils. They knew that they had a mission and a purpose to make things right and save the free world.

Don’t think for a second that what happened in Manchester could not happen in the United States. Of course it could. It has already happened in Orlando, San Bernardino, Boston, New York, Chattanooga, Little Rock, Garland, Washington, Pennsylvania, and elsewhere.

Western civilization must wake up to the fact that we are under assault. We are on the receiving end of a modern-day Blitz, like Britain was in 1940. Today’s Blitz is a very different kind of Blitz, but it is war nonetheless. It is high time that Western leaders quit regarding these attacks as “tragedies” or even “crimes.” They are acts of war. Until we acknowledge that they are acts of war, treat them as acts of war, and respond to them as acts of war, not only will they continue to escalate, but our ability to fight back will continue to be crippled by our own impotence.

Another entertainer who tweeted in response to the Manchester Jihadi attack was Miley Cyrus, who counts among her fan base many of the same young girls who are fans of Ariana Grande. Cyrus called for “No more war.”

Exactly how is that supposed to come about? The young girls massacred last night didn’t know they were at war because they have been lied to by Western leaders and entertainment icons.

The West could lay down its arms today and the Jihadis would only move in and seize control. If the Jihadis laid down their arms, their nail bombs, suicide vests and AK-47s, there would be no war.

Do you think there were any signs in London in 1940 calling for “no more war?” Who in Hawaii was shouting out “no more war” in December 1941? “No more war” in those days would have meant a plunge into darkness and death on an unimaginable scale.

We shouldn’t be calling for no more war today. We should take a clue from our ancestors, who were clearly better than we are, and call for victory.

Our collective mindset must change and it cannot change as long as massacres of civilians in attacks carried out by enemies in our streets are labeled as “tragedies” and regarded as mere “crimes.” We need a war mindset. The survival of our way of life depends upon it.

The only heroes in the current scenario are the first responders, the men and women who arrive on-scene after the carnage is through.

We also need other kinds of heroes–rough men who stand ready to visit violence on those who would harm us.