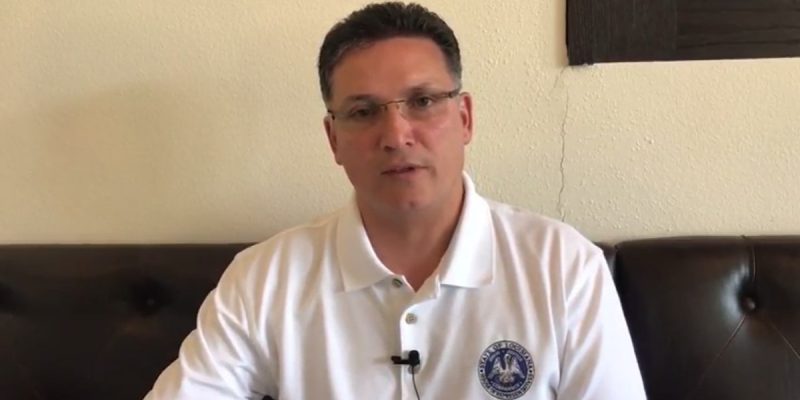 This is as much a campaign video as it is anything, which makes sense – after all, state representative John Schroder is running for Treasurer.

But we’re including it because it might be one of the more concise expressions of irritation with the misplaced priorities of the political leadership in New Orleans which produced the monument controversy in the first place.

Here’s Schroder, and we’ll have a couple of thoughts below…

We’re going a bit further than Schroder does, though we agree with everything he said. Let’s remember that Mitch Landrieu voted, in the Louisiana legislature, to allow the Department of Motor Vehicles to sell vanity license plates with confederate flags on them. And his administration is the one who put up a string of lamp-posts along Rampart Street which commemorate “Confederate Domination” of the city. The latter is less an outrage than one might think, as the lamp-posts also commemorate French, Spanish and American domination of the city, but the point is Landrieu’s record shows him to be a lot less of the radical social justice warrior he’s made himself out to be with his statuary bowdlerization campaign.

And as such, it is absolutely reasonable to consider Landrieu’s actions as a cynical ploy rather than a product of sincere conviction. Whatever theory you subscribe to as to his motivation – the three most prominent seem to be that (1) he’s trying to make his bones with the national Hard Left Democrat crowd up East in preparation for either a presidential run or a cabinet post (at the time all this began in 2015, Landrieu had every reason to think Hillary Clinton was going to win, and his advisors apparently thought the monuments campaign would get him a job in her administration), (2) he did all this in order to please his mistress, who is black, or (3) the taking down of those monuments was an act of vengeance against the white middle class voters in the suburbs and the state’s smaller cities who turned his sister Mary out of the U.S. Senate in 2014 and who generally support the preservation of Louisiana’s heritage despite some of its less salutary moments – nobody really believes Landrieu is doing this for his stated reasons.

And what we’ll say is that while Schroder’s statements are correct, what he’s leaving out is that Landrieu’s neglect of the crime and the potholes and the other problems which actually matter to the city’s residents isn’t incompetence. Landrieu isn’t competent, but it doesn’t take a genius to send crews out to fill potholes – that’s one of the simpler functions of a municipal executive. It’s a choice to do a poor job with the more mundane tasks of running a city; if you do those what you will get is middle class voters moving in. Middle class voters tend to choose to live in places where they can expect to get actual value out of their tax dollars – good roads, safe streets, functional drainage, decent schools, a friendly business climate and a growing economy, among other things – and those things are hard to produce when you govern the way the Left does.

Put a different way, middle class voters are a pain in the rear. They want lots of things which make for grunt work out of a mayor, and a Democrat mayor like a Mitch Landrieu would rather spend his time on vacuous crap like “social change” and other cultural aggressions, and offering wealth redistribution and excuses for the bad personal habits which cause so many people to be poor. Accordingly, it is no great loss if those middle class voters decamp to the suburbs. Their exodus simply makes for an electorate which is a lot less demanding and easier to control.

Rich voters don’t really need anything, because they can generally pay for whatever they need out of pocket (for example, their kids go to private schools and they’ve got private security in their neighborhoods). All they require is the politicians give them access and the occasional favor, and they’ll not only vote for them but write campaign checks. Poor voters are generally unsophisticated and susceptible to government dependency, and thus manipulating them is no great task.

And the more middle class voters you drive out of the city, the more pliable the electorate becomes.

This dynamic is what we’re talking about when we describe it as Weaponized Governmental Failure. Urban Democrats have learned how to turn the decline of the cities they run into a formula for permanent political domination of those cities.

They rule over a ruin, but they rule. And in New Orleans, Landrieu has literally created ruins where exemplary public art stood, proving that he had the power to do so.

John Schroder doesn’t need to go there. His point was well made without the larger indictment of Landrieu and that urban-socialist pattern he represents. But we have, and will continue to.

Interested in more news from Louisiana? We've got you covered! See More Louisiana News
Previous Article HOLTON: The West Has Failed to Defend Its Most Innocent And Precious
Next Article They’ll Have To Amend The Trump Budget Before Louisiana’s Congressional Delegation Can Support It