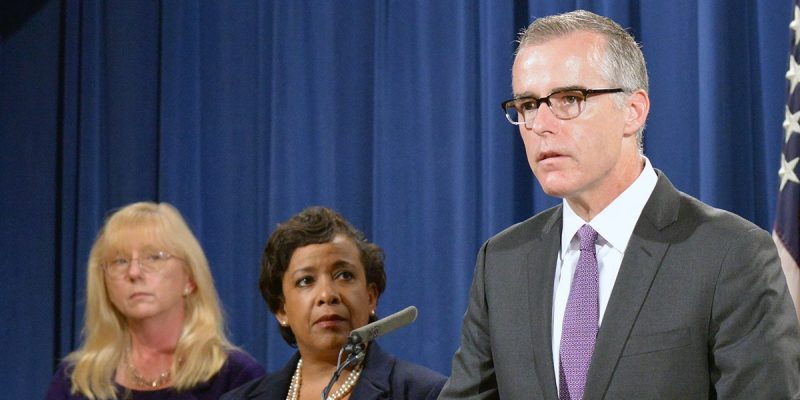 Reuters is reporting that President Trump is considering four FBI officials to serve as interim FBI director while the White House searches for a permanent replacement.

Apparently this came up during the daily briefing, with Deputy Press Secretary Sarah Huckabee Sanders.

That would imply that Trump isn’t 100 percent pleased with having Andrew McCabe, who has been acting director of the FBI for less than 24 hours, at the helm.

And why would McCabe be problematic? Some of our readers might be familiar with the story about his wife the Virginia state senate candidate who found herself the beneficiary of a truckload of campaign cash courtesy of Clinton pal and that state’s governor Terry MacAuliffe…

No question it does. Erickson reaches an unfortunate conclusion after going through some mainstream media profiles of McCabe…

McCabe is certainly a qualified and dedicated career bureau man. Trump should think twice before pushing him aside.

Wrong. The FBI needs a major housecleaning. It’s full of Obama political hack appointments, Muslim Brotherhood sycophants and others who shouldn’t have jobs in an administration which promises a departure from the previous administration – and therefore its leadership ought to be brand new and reflective of that departure. A guy whose wife thinks it’s a good idea to take campaign donations from Clinton insiders while he’s supposed to be overseeing an investigation into the Clintons doesn’t qualify.

Business Insider notes McCabe is currently under a DOJ inspector general’s office investigation over the campaign cash issue and potential Clinton-probe conflicts of interest surrounding it, not to mention he got sideways with Reince Priebus over an unnecessary embarrassment for the White House a few weeks back.

Earlier this year, the Justice Department’s inspector general announced a probe of the FBI’s handling of the Clinton email investigation.

Among the points of inquiry was whether McCabe should have recused himself from the case because of his family’s political ties.

The Washington Post reported that McCabe alerted a department ethics official at the time of the donation.

McCabe has occasionally found himself in the center of criticism from across the political spectrum.

Earlier this year, McCabe told President Donald Trump’s chief of staff, Reince Priebus, that a New York Times report about the FBI’s examination of the campaign’s ties to Russia was inaccurate. That prompted Priebus to ask the FBI to rebut the story publicly, but the FBI declined.

Some Democrats criticized the White House for attempting to pressure the FBI to speak out during an ongoing investigation.

And then there are a couple of fairly brutal tweets from Dick Black, the Republican who beat Jill McCabe in that state senate election in Virginia…

#Comey promoted #AndrewMcCabe to the #2 #FBI position despite his conflict of interest during his wife's campaign against me. #Corrupt pic.twitter.com/5a9dBhNYyX

Here is another social media photo of our acting #FBI director, #AndrewMcCabe breaking the rules by campaigning on social media. #Corrupt pic.twitter.com/hBCH29yErY

Given the firestorm of criticism surrounding the Comey firing, most of which is totally misplaced coming as it does from Democrats who had wanted Comey gone since November, McCabe’s baggage makes him a poor choice to lead the Bureau.

It’s time to clean house. Trump should find a very well-respected U.S. Attorney from nowhere near Washington, DC, with a long record of prosecutorial success, and perhaps a background as an FBI agent before becoming a prosecutor, and bring that person in for a fresh start. Trump should take pains to insure that the investigation into Russian influence in the 2016 election, which as National Review’s Dan McLaughlin ably points out is not a criminal investigation, continues under the new FBI director but so does an investigation of Clinton’s e-mails and the reports of the Obama administration spying on its political adversaries.

Drain the swamp. All of it. If the Democrats want to be critical of that, it’s a free country.