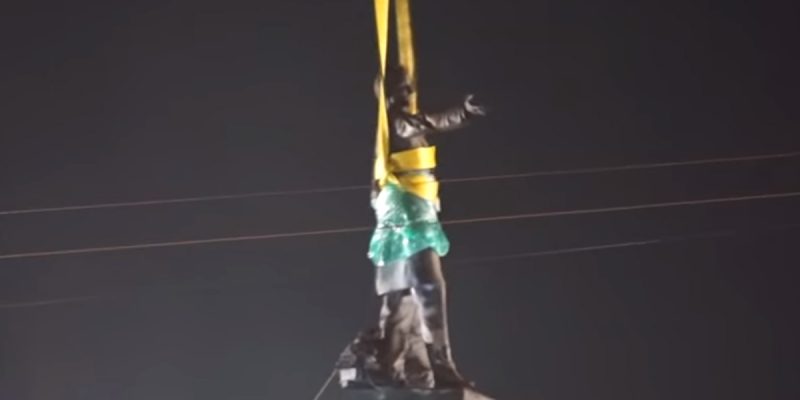 Early this morning, as crews of unidentified workers were at the corner of Canal Street and Jefferson Davis Parkway using cranes to break the statue of Jefferson Davis off its pedestal and cart it off to a warehouse for storage for an indeterminate period of time, this statement – representing something of a touchdown dance – was released by the office of New Orleans mayor Mitch Landrieu.

We present it without commentary.

“After nearly two years of planning and court battles, City officials began the process today of removing the three remaining monuments that prominently celebrate the ‘Lost Cause of the Confederacy.’ The statues that are being removed were erected decades after the Civil War to celebrate the ‘Cult of the Lost Cause,’ a movement recognized across the South as celebrating and promoting white supremacy.

“There are four prominent monuments in question. The Battle of Liberty Place monument, which was removed three weeks ago, was erected by the Crescent City White League to remember the deadly insurrection led by white supremacists against the City’s racially integrated police department and government. The statue coming down today is the Jefferson Davis statue on Jefferson Davis Parkway. The statues slated to come down next include the Robert E. Lee statue at Lee Circle and the P.G.T. Beauregard equestrian statue on Esplanade Avenue at the entrance to City Park.

“‘Three weeks ago, we began a challenging but long overdue process of removing four statues that honor the ‘Lost Cause of the Confederacy.’ Today we continue the mission,’ said Mayor Mitch Landrieu. ‘These monuments have stood not as historic or educational markers of our legacy of slavery and segregation, but in celebration of it. I believe we must remember all of our history, but we need not revere it. To literally put the Confederacy on a pedestal in some of our most prominent public places is not only an inaccurate reflection of our past, it is an affront to our present, and a bad prescription for our future. We should not be afraid to confront and reconcile our past.'”