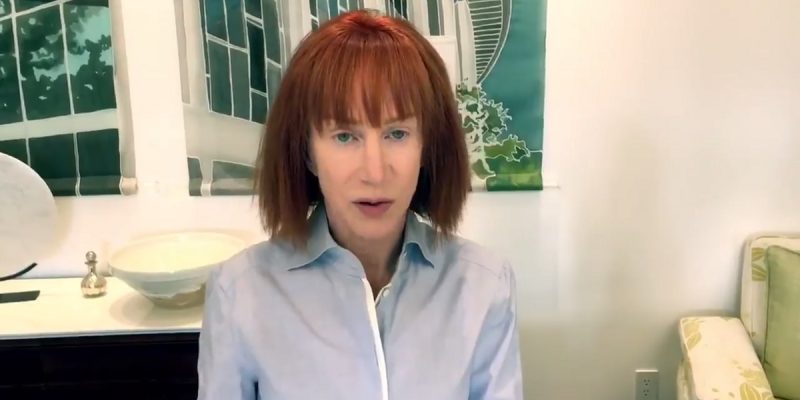 In case you missed it, a lot of the political world was questioning the intelligence of D-list celebrity Kathy Griffin yesterday after she released a series of photos of her “beheading” Donald Trump. Because of the graphic nature of those photos, I won’t be posting them here.

Because she’s edgy or something… Okay, so really, it’s because no one has talked about Kathy Griffin since New Year’s Eve, when she was on CNN with Anderson Cooper again.

Anyway, social media was in an uproar over the images because 1) they were graphic and 2) they were tasteless. I’m old enough to remember when a rodeo clown lost his job for wearing a mask of Barack Obama, and this is pretty universally accepted as much worse than that.

Well, there was such a huge backlash that Griffin apologized, calling it an attempt at humor or some such nonsense.

NEW: Kathy Griffin issues an apology after images were posted of her holding a decapitated head that looked like President Trump pic.twitter.com/sTmAcaN175

As if that weren’t bad enough, CNN has decided to “evaluate” her role in their New Year’s coverage.

“We found what she did disgusting and offensive,” a CNN spokesperson said in a statement Tuesday evening. “We are pleased to see she has apologized and asked that the photos be taken down. We are evaluating New Year’s Eve and have made no decisions at this point.”

“For the record, I am appalled by the photo shoot Kathy Griffin took part in,” Cooper tweeted. “It is clearly disgusting and completely inappropriate.”

AND as if that weren’t bad enough, the Secret Service has taken an interest in the photo shoot.

Law enforcement sources tell us the Secret Service has launched an investigation into “the circumstances surrounding the photo shoot.”

TMZ first posted the pic, shot by famed photog Tyler Shields. We’re told the Secret Service does not jump to conclusions that incendiary photos or writings are serious or in jest. They also will not automatically pass the photo off as art. They routinely investigate and that’s exactly what they’ll do in this case.

We’re told agents will most likely attempt to interview her and Tyler.

In the end, though, Griffin is a troll, and this was all an act. A publicity stunt from photos to apology that is meant to raise her celebrity profile and get her some street cred with #TheResistance.

Interested in more national news? We've got you covered! See More National News
Previous Article VIDEO: Watch Kim Jong Un’s Worst Nightmare Unfold With A Successful U.S. Missile Defense Test
Next Article BAYHAM: Farewell To A Friend On The Other Side Of The Divide