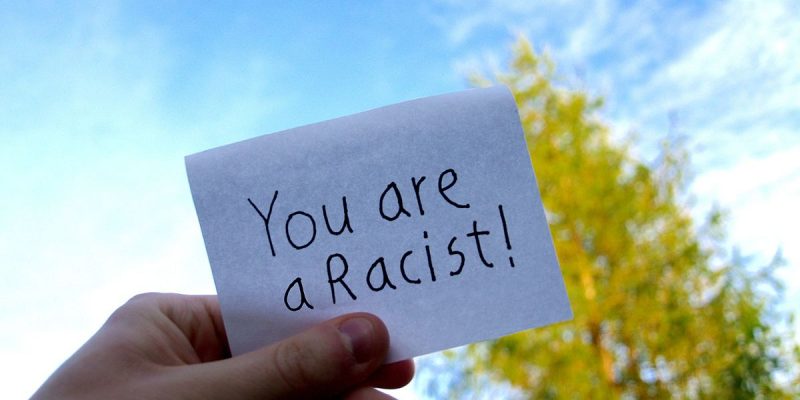 (UPDATE) Nicholas Dean was fired as principal of Crescent Leadership Academy on Thursday. A video surfaced showing Dean wearing Spartan symbols and a ring depicting the Iron Cross, a German military decoration some associate with the Nazis.

But a report in the Advocate raises a question as to whether the video of Dean  proves he is a white supremacist.

Mark Pitcavage, of the Anti-Defamation League’s Center on Extremism, said Spartan symbols are often used by right-wing extremists, though he added that the video alone in this case was not enough to conclude Dean has white supremacist or Nazi leanings.

He expressed some doubts that Dean’s skull ring was actually a reference to the so-called Totenkopf, an old German symbol made up of a skull and crossbones that was often used by the Nazis. And he said the Iron Cross is not necessarily used as a hate symbol.

The intolerant bullying left is famous for policing speech freely and liberally throwing the word racist around. We’ve all seen it. But what they’ve done to a New Orleans school principal is unprecedented.

Nicholas Dean, principal at Crescent Leadership Academy was escorted off campus this week and told not to return for at least a week or two. Not for what he said but where he was standing.

Dean, like many others visited Lee Circle the day they were scheduled to take down the monument. A photograph emerged of Dean standing in the crowd.

Community activist Torrence L. Taylor posted the picture on his Facebook page writing, “So we have a principal of an predominate Black or even all minority school who was out in public supporting the confederacy. Are there any parents on my list who have children that attend this school ? We must get rid of this white supremacist that’s over our students.”

White supremacist? A man who has dedicated his life to helping troubled youth is now a white supremacist because he showed up to watch an historical event.

More than half of the kids at Crescent Leadership Academy where Dean is principal have had run ins with the law. It has to be a tough gig for an educator. 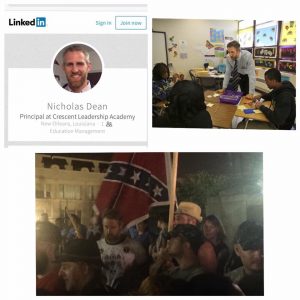 Dean said the fact that he was shown standing next to monument supporters was pure coincidence.

“I didn’t go to protest for either side. I went because I am a historian, educator, and New Orleans resident who wanted to observe this monumental event,” he said. “People who know me know that I am a crusader for children and I fight tirelessly on their behalf.”

Tuesday night Fox 8 reported the picture in question was of a mixed group of those for and against the monument removal.

“With the recent events in the city it is important that this matter is thoroughly reviewed,” she said.

Thoroughly reviewed? The guy is one of a couple hundred people standing around to watch an historical event and he’s taken off the job for a week or two? Are you kidding me?

This is how the identity politics pushers roll. They’re quick to cry racism and slow to learn the facts.

To take a man who chooses to work with some of New Orleans’ most troubled youth and brand him a white supremacist, remove him from his job, and jump to conclusions is beyond disgusting.

Mr. Dean should be back on the job today and Superintendent Bennett-Joseph should hold an assembly and apologize to Dean in front of the entire school for assuming the worst.

Is this what it has come to with the left. When it comes to racism you are guilty until proven innocent. And even if you are innocent they are still suspicious.

And really how do you prove what’s in a man’s heart anyway. This is why the left can use fear to intimidate leaders. Pulling out the race card shuts down any argument. You are a racist. No I am not. Yes you are. Debate over. The left wins.

It’s time for those of us not seduced or deceived by the destructive philosophy of leftism to stop being intimidated by their tactics.

I hope the kids at Crescent Leadership Academy give Principal Dean the benefit of the doubt so he can continue with his life work of trying to steer them to the right path in life.

Dan Fagan is a former television news reporter, journalism professor, newspaper columnist, and radio talk show host. He grew up in New Orleans and currently lives there. You can reach him at [email protected]

Interested in more news from Louisiana? We've got you covered! See More Louisiana News
Previous Article Are Democrat Special Interests Getting Behind Julie Stokes In The Treasurer’s Race?
Next Article It Looks Like John Alario Is Trying To Kill The Ridesharing Bill