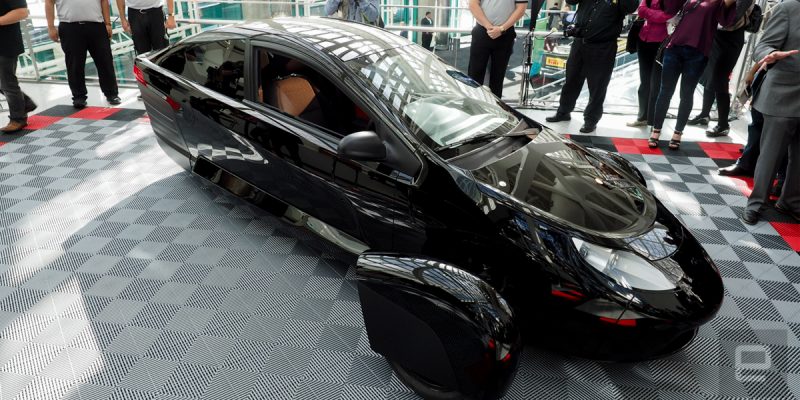 Last week there were some fun fireworks in Shreveport, as public dissatisfaction at having been fleeced by the owner of a car company which doesn’t seem to actually make cars has boiled over and the economic development gravy train which brought Elio Motors and its fake promises of manufacturing jobs into that community looks like it’s at its end.

A few days ago, Caddo Commission President Steven Jackson went on KEEL Radio in Shreveport to talk about Elio and the deal which was cut to bring them to Shreveport to make cars, and while his language was a little salty his perspective was more or less on target…

Jackson said he wasn’t interested in meeting with Paul Elio, the founder of the company, based on the current circumstances – which are that after years and years of Elio Motors having had a sweetheart lease of the former GM plant in Shreveport as a manufacturing facility, not to mention some seed capital courtesy of taxpayers in Caddo Parish, virtually nothing has come of the investment and time is running out. By July 1, the terms of the contract call for Elio Motors to either produce 1,500 jobs in Caddo Parish or cough up a $7.5 million fine – a number which Elio Motors has already budgeted, according to its SEC report.

That SEC report also says Elio Motors is $376 million short of capital requirements needed to begin production of its three-wheeled cars, and that last year it burned through $52 million. Elio Motors will be out of business long before it cranks up its production line next year, which is the schedule it’s currently touting.

Given that, Jackson is on pretty solid ground in rejecting the idea of having to sign a nondisclosure agreement in order to get an audience with Elio, who is much more in a position of debtor than big shot. Two things are apparent – one, it’s a bit tawdry to expect public officials who are in a position of stewardship of taxpayer dollars to keep your secrets. And two, given the sorry tale told by the SEC filing, one can only imagine what ugly information lies behind that NDA Elio Motors wants the Caddo Commissioners to sign.

Meanwhile, the company’s majority shareholder Stuart Lichter, was called out by the Caddo Commission’s lawyer earlier this month…

“Today the board voted to ask Stuart Lichter to come and talk to the IDB and the Parish and update everybody as to what he’s doing, and what he expect to happen at the plant.” attorney David Wolfe said, according to KTBS. “Its frustrating that Elio is not running and more jobs are not there now.”

So late last week Paul Elio showed up in Shreveport, and his salesman’s hat blew off to reveal the frustrated failing entrepreneur underneath…

Speaking on the site of the old GM Plant, Paul Elio became visibly frustrated, and raised his voice at reporters multiple times as he tried to justify his company’s lack of movement in Shreveport. When asked about the assessment of the current equipment at the plant from the Industrial Development Board President, Elio erupted:

“So I have had some of the world’s most revered equipment people in here, and they believe this is top shelf equipment. So that’s why I question…so you’re using this guy as an expert, so before you spout off with an expert, make sure…(clarification from reporter that he’s not being used as an expert). You…you…you’re reaffirming his claim. So before, you, you reaffirm his claim, you ought to challenge his expertise. It..if you’re a good journalist. If you go…if you go talk to a homeless guy on the street, and he says the equipment’s bad, are you gonna re-report that. Or are you going say I gotta consider the source, that’s a bad source. So why don’t you challenge him on his…uh, uh, knowledge of auto equipment, and then make…make an assessment, and then if he actually has some expertise, and it might be valuable, then report it. So let me go back to my prepared remarks please.”

Unfortunately for Elio, he wasn’t done. Some his other highlights from today include:

“There’s this overarching story that if Elio weren’t here, there’d be jobs in this plant. That is bunk.”

“Elio Motors owns all the equipment inside this facility. Uh, it has not been supported at all with any public dollars.”

“A company out of Texas. Who was negotiating with Louisiana, and we were asked, by the LED (Louisiana Economic Development), to give them a 6 month right to negotiate. So as a private company, we have no reason to do so, but we’re a team player, so we said we would. That delayed the entire Elio project 6 months.”

“Over the last year, we’ve made a lot of progress!”

That’s not the behavior of somebody who has a future. Rather, it’s indicative of somebody who’s headed down the tubes and isn’t happy about facing the music.

We like entrepreneurs here at The Hayride. This is an entrepreneurial company, after all. What we don’t like is crony capitalists who attach themselves to government for funding and free stuff, and we really don’t like sugar-daddy politicians who dole out taxpayer dollars on rainbows and unicorns. Elio Motors and their goofy three-wheeled cars were very obviously going to be a bad investment, which is why they’ve never had enough capital to fulfill their promises – private-sector capital tends to be a little less susceptible to stupid investments, and public-sector suckers like the former Caddo Commissioners who signed on to this boondoggle simply didn’t shovel enough cash in to start the assembly lines moving.

Maybe if they’d started building and selling cars on a small-scale level and had an actual product to sell things would have been different. In any event, this experiment is all but over and it’s ended badly.

Interested in more news from Louisiana? We've got you covered! See More Louisiana News
Previous Article We Should Talk About This Crazy Jim Beam Column Bashing LABI And AFP…
Next Article Louisiana Now Denies The Right To An Attorney For Poor Defendants And The Bar Association Doesn’t Care