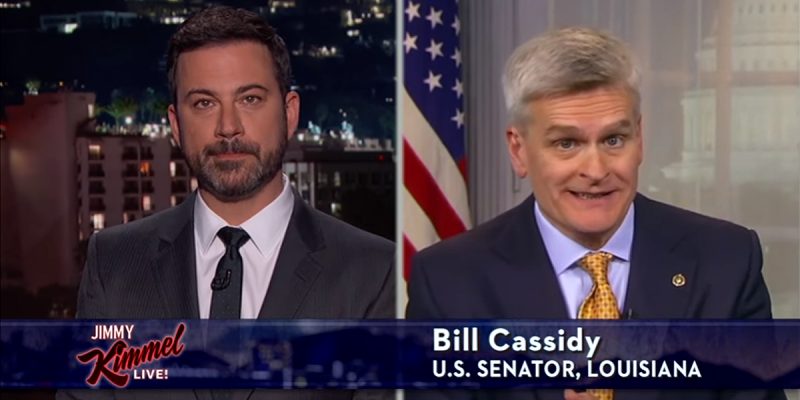 In case you missed this, here was Sen. Bill Cassidy’s segment on The Jimmy Kimmel Show, which Cassidy earned himself by, last week, talking about how any healthcare bill passed by the Senate has to meet the “Jimmy Kimmel test.”

The “Jimmy Kimmel test” is essentially a requirement that any kid born with a condition like the congenital heart disease Kimmel’s son was born with will get the medical treatment necessary to get said kid past the problem. This became an issue because Kimmel ran off at the mouth demanding that Obamacare, which is collapsing, be left alone by Congress because when his child was born he had to undergo major surgery and significant medical follow-up work, which would incur medical bills that probably would break a middle class family – particularly one without insurance.

To which the response is a sympathetic “Well, yeah.” A life-threatening medical condition is naturally going to be particularly expensive to treat, and in this society we’re exceptionally generous in attempting to treat people who don’t have the means to pay for their health care. That’s one reason the majority of the dollars spent on medicine go through the government, whether it’s the VA, Medicaid, Medicare, the SCHIP program or any of the rest of the ways the public sector picks up the tab.

And the job the government does in managing that money and the results it generates is anything but a recommendation for more of it. But Kimmel, whose family is covered by a gold-plated company policy at ABC/Disney, doesn’t have a clue what Obamacare actually is or what government-issued medical care looks and feels like. He can talk all day about how he grew up poor, but he hasn’t been poor in a while and has no idea what he’s inflicting on common folks.

So with that as background, Cassidy gets invited to go on Kimmel’s show to talk about Obamacare and its replacement. We’d say he did all right, but most of the folks who voted for Cassidy aren’t going to enjoy this clip simply because Kimmel is completely insufferable. You have to wade through a little under six minutes of Kimmel’s monologue, much of which is spent trashing Newt Gingrich for making a completely accurate criticism that Kimmel and the rest of the leftist late-night comedians are too angry to be entertaining (and Kimmel, in trashing Gingrich, proves his critique in full), to get to Cassidy. That part of the clip is a little better, and for the most part Cassidy acquits himself pretty well in noting that yes, in fact Obamacare does suck, and forcing people to buy health insurance that costs $20,000 per year or more is the epitome of suck, and what replaces it is going to have to be better.

Most of which is lost on Kimmel, who can barely spell “health care.” And you can tell Cassidy realizes he isn’t going to get anywhere about two thirds of the way through the segment – at that point he decides he’s just going to humor the comic until it’s over rather than disabuse him of the stupidities he’s spouting. It ends in Kimmel making demands and Cassidy essentially saying “OK, whatever.”

The problem is the predicate. Cassidy was only invited on the show because he referenced Kimmel in the first place, and because of that fact he’s not really in a position to hammer him for the dumb things he says. It would be a real PR defeat for the guy who coined the “Jimmy Kimmel test” to then repudiate Jimmy Kimmel on health care on Jimmy Kimmel’s show.

As much as Kimmel would deserve the damage from that bomb going off, most of the heat would fall on Cassidy.

So instead, you had this.