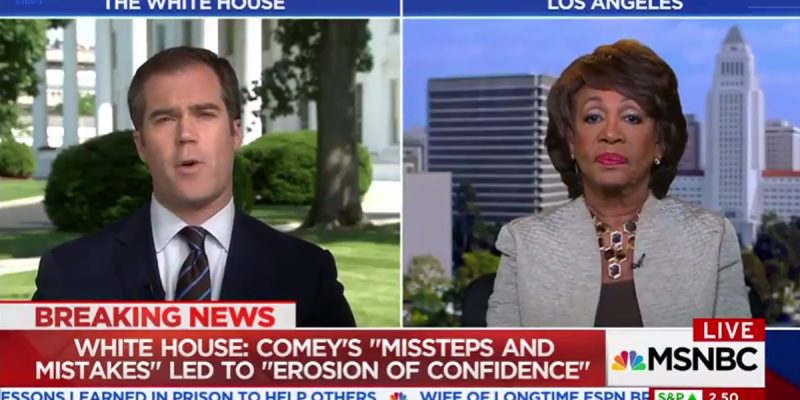 …it went about as well as you might expect when Maxine Waters gets five solid minutes to talk on TV about any subject carrying a degree of complexity.

Waters was one of the ranting Democrats who over the past several months had continuously bashed James Comey as the FBI director, saying that he no longer had any credibility, only to completely change her tune the minute President Donald Trump opted to fire Comey earlier this week. And when NSNBC brought her on to square her rather circular remarks she struggled to do so.

Some highlights, for those of you who can’t watch the video just now…

1. MSNBC reporter Peter Alexander brought up the fact Maxine Waters said Comey had no credibility, and her answer was…

“No, but I believe the president thought that — don’t forget, you’re talking about what some Democrats said, what I said … he was the president. The president supported [Comey], he had confidence in him, it was within his power.”

2. Alexander then asked whether it would have been OK if a President Hillary Clinton had fired Comey, and there was this…

“So she should’ve fired him, but he shouldn’t have fired him — this is why I’m confused,” Alexander told Waters.

3. And then there was the timing issue…

“This president basically has interfered with an investigation where he may be implicated,” Waters said. “That’s outrageous! The bottom line is I think if the president had fired him when he first came in, he would not have to be in a position now where he’s trying to make up a story about why; it does not meet the smell test.”

This Democrat narrative that Maxine Waters is contributing to, that Trump’s firing of Comey somehow was designed to negatively affect some investigation into possible collusion between the Trump campaign and the Russians, is somewhat perplexing. First of all, it is by no means established that there is such an investigation – Comey himself had said there was no criminal probe of the Trump campaign, which leaves the likely possibility that the FBI is conducting a counterintelligence inquiry into Russian interference with the election.

But that inquiry likely does, and certainly should, include a look into ties between the Clinton campaign and the Russians.

And in any event, that investigation wouldn’t go away just because Comey was let go. It’s going to continue, and the president knows it. He also knows he’ll never get a new FBI director through the Senate if that appointee doesn’t pledge to carry the investigation through to its conclusion. So the idea that Comey was fired to shut that investigation down is simply a canard being spread by liars.

Maxine Waters isn’t the only one of those, by the way. Here is the execrable Sen. Ed Markey of Massachusetts…

Massachusetts U.S. Sen. Edward J. Markey was forced to apologize yesterday after he “erroneously” claimed live on CNN that a New York grand jury was investigating President Trump’s campaign ties to the Russians.

“There are very strong allegations the Russians had relationships with people inside of the Trump campaign,” Markey said. “In fact, subpoenas have now been issued in northern Virginia with regard to Gen. (Michael) Flynn and Gen. Flynn’s associates. A grand jury has been impaneled up in New York.”

But responding to a Herald inquiry yesterday, spokeswoman Giselle Barry said Markey had made the New York comments “erroneously.”

The problem with such overheated accusations is the damage to one’s credibility they do when their substance turns out to be absent. Trump himself has been a victim of similar mistakes, and his credibility has paid a price for them. But so long as the Chuck Schumers, Ed Markeys and Maxine Waters of the world attempt to one-up The Donald with hyperbole and fake outrage he’s going to look like the adult in the room and they won’t be able to touch him.

Trump wins on the Comey firing. Not because Trump has done anything wise or intelligent, but because the other side is a collection of dolts.