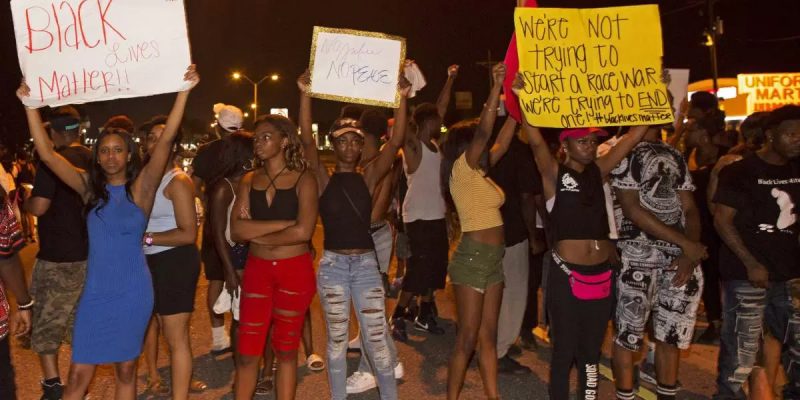 This isn’t a big thing but it’s worth showing, because it’s the first bit of the Alton Sterling protesters since yesterday’s Washington Post story about the Justice Department’s announcement.

There was a small crowd of protesters who set up across Goodwood Boulevard from the Baton Rouge Police Headquarters on the corner of Goodwood and Airline Highway last night. And some genius in that group got the bright idea that the thing to do would be to fan out across Airline and block the street.

In the middle of the night.

This is becoming a standard tactic of the left-wing protest set, and it’s led to some spectacular video of normal folks having none of it and simply driving through a mass of idiots. No intelligent person puts himself in a position to have tire tracks on his face, and there’s a reason for that – some motorist who you purport to falsely imprison by blocking the street he’s trying to drive on is not your adversary until you impose that false imprisonment on him, and he then has the right to break out of that imprisonment using what means are available.

Running you over with his truck would constitute such a means.

Law enforcement in Baton Rouge, to its credit, recognizes what an abjectly stupid and unacceptable tactic this is. And back in July of last year when the Sterling case first exploded onto the scene and the protesters tried twice to block the interstate highways – first at I-12 just down Airline Highway from police headquarters, and next at I-110 at Government Street – the cops swooped in and arrested everybody they could get their hands on. This was excellent work, regardless of how much whining and screaming it generated from the protesters.

Interested in more news from Louisiana? We've got you covered! See More Louisiana News
Previous Article Why Has The Alton Sterling Decision Played Out The Way It Has?
Next Article KESSLER: Tense Standoff Turns Violent In New Orleans Over Confederate Monuments