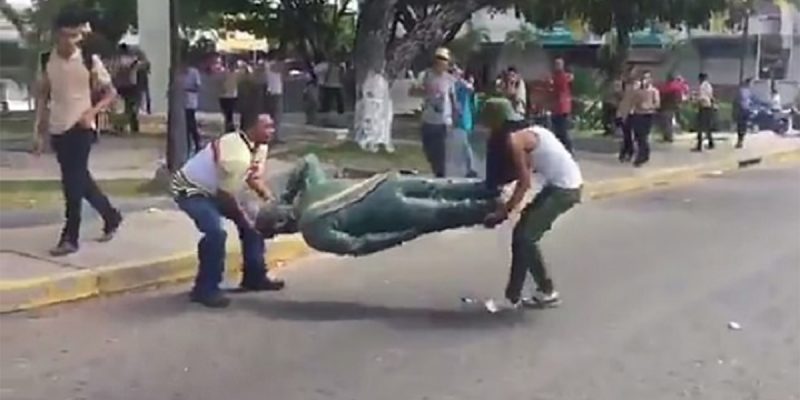 Our guess is that most of the people demonstrating to take down the monuments to Robert E. Lee, P.G.T. Beauregard and Jefferson Davis in New Orleans probably wouldn’t be so fired up over this video from Venezuela, where amid what looks a whole lot like a budding revolution a mob pulled down a statue of Hugo Chavez and set about breaking it into pieces.

And no, there is no equivalence between Robert E. Lee, let’s say, and Hugo Chavez. Robert E. Lee didn’t fight to impose anything on anyone, nor did he fight to deprive anyone of their property. You could argue that Lee fought to preserve slavery, which is an imposition and a deprivation of a human being’s freedom, and you wouldn’t be wholly wrong. Lee did free his family’s slaves, though, and denounced the institution. What’s more, Lee’s decision to fight for the Confederacy was based on a desire to defend his friends, family and neighbors from a military imposition on their land.

Certainly the freedom Lee, Davis and Beauregard fought for in the Civil War was an imperfect one. Compared to what? Communism? What case can be made for that?

Chavez’ political career was marked by the use of violence and corruption to facilitate the theft of private property and its redistribution to his political cronies. Chavez enslaved an entire people of what was once an emerging, soon-to-be-First-World nation and wrought such economic destruction that the average Venezuelan has lost 19 pounds in the past year because of a lack of available food.

And his successor Nicolas Maduro, who hopefully will soon meet the fate of his namesake Nicolae Ceaucescu in Romania, has only continued the abuses Chavez began in that country. Some 37 people have died in the latest round of civil unrest as the people of Venezuela finally take to the streets in an effort to reject the socialist regime there.

Actually, that might be too strong a statement. What is the opposition in Venezuela really calling for? Elections. They want state and local elections moved forward. They won the parliamentary elections in 2015, winning a majority in the National Assembly, and Maduro set about having his Supreme Court negate every measure the new majority has passed. Last year the opposition attempted to bring a referendum on Maduro’s rule, and were blocked. Meanwhile Maduro is attempting to write a new constitution in Venezuela which would more or less cement him in power.

All the while people are dying in hospitals for lack of medicine, people are starving in the streets for lack of food, there are no jobs because the country’s businesses are all going under and the socialist government has destroyed most of Venezuela’s formerly profitable industries – the oil industry in particular.

Venezuela is in ruins. It was the socialist dictatorship Chavez set in motion which brought it to this point. Why shouldn’t his statues be destroyed? That’s a question worth asking to the people busily attempting to bowdlerize American history.

Interested in more national news? We've got you covered! See More National News
Previous Article Liberals Are Super Upset About the FCC Going After Stephen Colbert
Next Article CROUERE: Hillary Clinton Has To Be The Sorest Loser In History