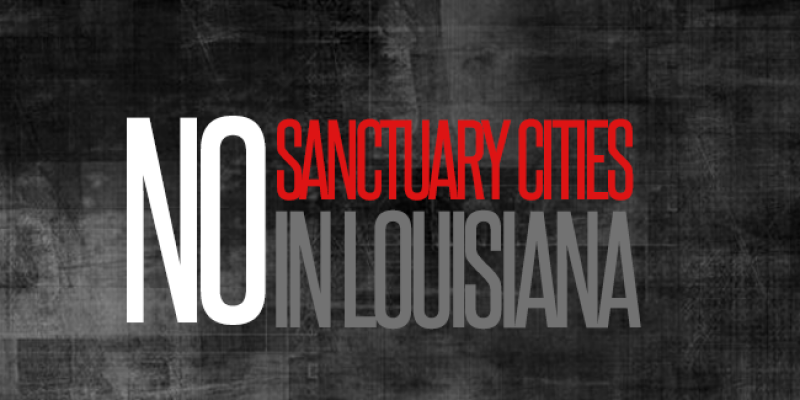 Today the Louisiana Senate will vote on HB 676, otherwise referred to as the Louisiana Sanctuary City Prohibition Act. The bill’s purpose is to prevent any state agency or political subdivision within the state from constituting any kind of sanctuary policy. While the bill would obviously be good news for Republicans, even if it passes today we can hardly count on our governor to sign it into law. And one can only hope that last year’s sanctuary city drama doesn’t resurface.

Especially since President Trump’s election, sanctuary policies and cities have gotten a lot of attention, and there’s been a great deal of controversy and confusion surrounding these concepts. To be clear, this legislation addresses several defining terms in its context. In particular, it defines a sanctuary policy as any kind of rule, law, or policy that either prohibits or discourages cooperation or exchanging info with U.S. Immigrations and Customs Enforcement (ICE) in order to properly enforce federal immigration law or does not allow law enforcement officers to ask anyone that they’re lawfully arresting for his or her name, date and place of birth, and immigration status. HB 676 passed 63-32 in the House, just shy of a two-thirds margin.

Texas Governor Greg Abbott signed a similar bill into law in his state only a couple of weeks ago. He commented before the signing, which was live-streamed on Facebook, saying, “Texans expect us to keep them safe, and that is exactly what we are going to do by me signing this law.” After all, it is the duty of law enforcement officers to keep us safe by enforcing the law, thus it is 100 percent their business to know if anyone is breaking it.

Our neighboring state may have been victorious, but we’re fairly confident John Bel Edwards would never approve such legislation. Democrats have been outspoken about their opinion on the Texas bill, asserting that it’s racist. Most Republicans, on the other hand, see it for what it really is – granting law enforcement officers the freedom to do their jobs. Let’s hope that this passes in the Senate and that state Republicans can rally a 2/3 vote in both chambers to overturn Edwards’ expected veto.